Throughout the world, the discovery of rare rocks and minerals is something to be celebrated. This holiday season, we'd like to feature some of the superstars of our own collection – highlighting the rare rocks and minerals we admire most, in hopes of sparking the attention of other collectors and enthusiasts. Check out our overview, below, to learn more about a few of our favorites! 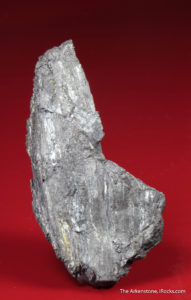 Originally described by Mariano Barcena in 1874, this is a fantastic example of livingstonite!

Livingstonite [HgSb4S8] is a rare mineral, found in low-temperature hydrothermal veins, in localities scattered throughout Mexico, Japan, Kyrgyzstan, and Spain. Named after Scottish explorer David Livingstone, it was originally described in 1874 by Mariano Barcena. Its rich, lead-gray metallic coloring is quite beautiful and distinct, and occurs most often as elongated, bladed crystals or globular masses of interlaced needles.

Brazilianite [NaAl3(PO4)2(OH)4] is a hydrous sodium aluminum phosphate, most commonly found in phosphate-rich pegmatites. The most note-worthy deposit is located in Minas Gerais, Brazil (hence, the name) – though some collectors' specimens have been discovered in locales in Grafton County, New Hampshire. 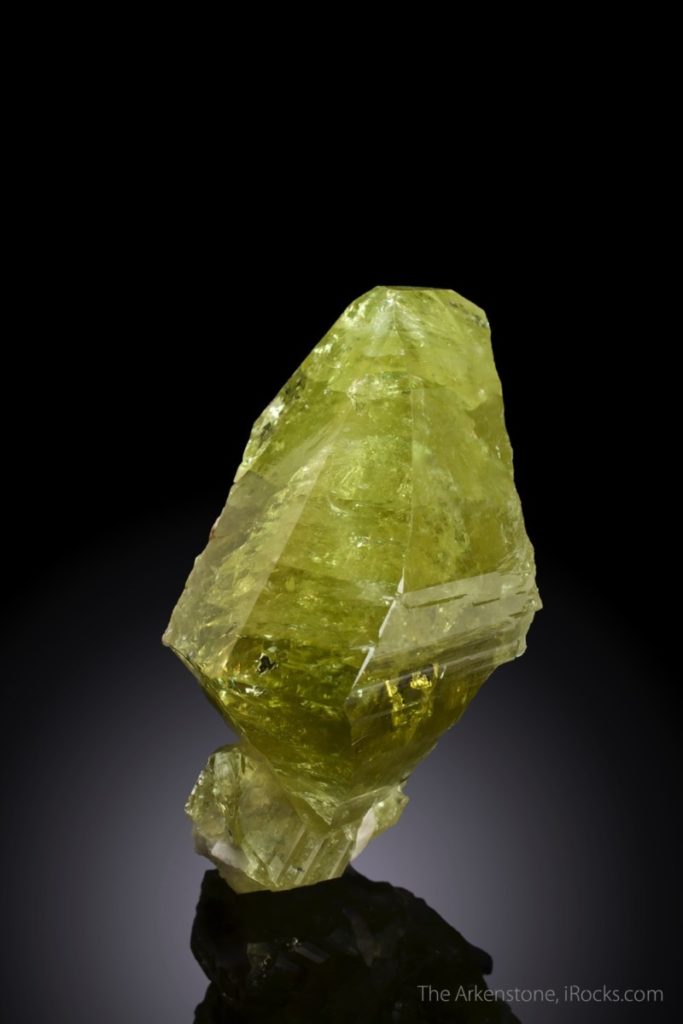 Old Brazilianites from the 1930s-1940s are still rare mineral superstars!

Often discovered in precious-stone quality, brazilianite crystals are transparent and gemmy, ranging in color from bright yellow-green to dark olive. This mineral exhibits exquisite crystal formation, and druse groupings are common – though crystals are often found intergrown with associated muscovite  (as seen in the above photo), or rising from leaves of parent rock. 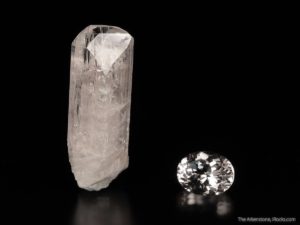 This rare combo of rough danburite crystal and cut stone from Mexico shows the beauty of natural crystals and gem.

Danburite [CaB2(SiO4)2] is a calcium boron silicate mineral with orthorhombic crystal form, typically occurring in contact with metamorphic rock. Its colorless crystals often resemble quartz in appearance, though Danburite exhibits a Mohs hardness of 7 to 7.5, and specific gravity of 3.0, and coloring commonly ranges from pale yellow to ochre. The specimen pictured above is a rare pair; a natural pale pink crystal with a cut stone.

Danburite's crystal symmetry and form are similar to topaz, and its clarity, resilience, and strong dispersion add to its value, as cut stones are ideal for use in jewelry. 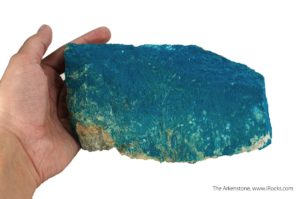 These rich, blue, rare langite crystals were collected in 2013 in Slovakia.

Langite [Cu4(SO4)(OH)6+2H2O] is a rare hydrated-copper sulfate mineral, formed from the oxidation of copper sulfides. Named after the physicist and crystallographer Viktor von Lang, Langite was first discovered in Cornwall, England, in 1864.

Though an uncommon find, Langite is a widespread secondary mineral, possibly of post-mine formation. It is associated with posnjakite, serpierite, devilline, chalcophyllite, connellite, brochantite, malachite and gypsum, and dimorphous with wroewolfeite. It is discovered almost exclusively in druses of small, blue-green crystals. 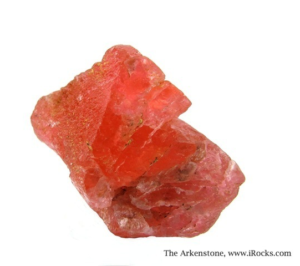 Vayrynenite is a very rare beryllium phosphate, and not often do you find it with such good rich salmon color and of decent size.

Vayrynenite [Mn2+Be(PO4)OH] is a very rare species, found as an alteration product of beryl and triphylite in complex-zoned granite pegmatites. These rare prismatic crystals occur in elongated, striated formations with transparent to translucent opacity, and vitreous luster. Their coloring varies from pale pink to a deep rose-red (as seen in the specimen, above).

Named for Heikki Allen Väyrynen, a Professor of Mineralogy at Helsinki Technical Institute in Finland, Vayrynenite is found in a few European localities (including Finland, Sweden, Spain, and Portugal), as well as in Kazakhstan, Pakistan, and Afghanistan. Associated with eosphorite, apatite, hurlbutite, beryllonite, moraesite, amblygonite, tourmaline, topaz, muscovite, microcline, and quartz.

If you're interested in viewing more rare rocks and minerals, take moment to peruse our current collection of rare species – or contact the experts at iRocks, for more information on our upcoming auctions and shows!