Each year, collectors enjoy the variety of mineral competitions at the Tucson Mineral and Gem Show™, where multiple awards are given out for best minerals, themes, displays, and more. Some of the most popular are listed here, as explained at the TGMS website with special additions by Lauren Megaw and Les Presmyk.

There are several special trophies awarded to competitive exhibits at the annual Tucson Gem & Mineral Show.  The first is the Desautels, honoring the long-time curator of minerals at the Smithsonian.  This award is for the best case of minerals entered in that competition.  The second is the Lidstrom trophy, acknowledging a long-time dealer in the Tucson Show.  It goes to the best single specimen, as designated by the exhibitor, contained within a competitive exhibit.  The third is the Bideaux Trophy, awarded to the Best Arizona specimen in that competition.  Dick Bideaux was a native Tucsonan and one of Arizona’s top mineralogists.  These are in addition to the trophies awarded to the best case in each of the exhibitor classes and for the Best of Theme categories.  Information for the Tucson Show competition and all of these trophies can be found at www.tgms.org/show.

There is one more special trophy, the Romero Trophy, that is awarded to the best Mexican specimen in the show.  This award honors the memory of Dr. Miguel Romero, often credited with saving and preserving Mexico’s minerals and mineral heritage.  The trophy winning specimen is selected by a judging team of three of his friends and the trophy is presented along with all of the competitive trophies mentioned above at the Saturday night banquet and awards ceremony.

[box]To honor the memory of Walt Lidstrom, noted mineral dealer and collector, TGMS, along with his family, present a trophy for the outstanding single mineral specimen which is part of a competitive exhibit.[/box]

Walt Lidstrom (1920-1976) was a game-changing mineral dealer. Originally a rancher from Oregon, Lidstrom began collecting Oregon plumes agates in 1939, by 1960 he had amassed an impressive amount of top-notch slab material and made his way to his first mineral show. As his business, Lidstrom’s, began to grow he transitioned to fine crystallized mineral specimens. He used both his self-taught knowledge and a keen eye for spectacular specimens to make himself a leading expert in the field. Lidstrom is commonly credited with changing the mineral dealing business, from ma-and-pop shops, to a reputable professional business. He thrived on mineral competition and enjoyed watching the business grow. Lidstrom would buy from rock-hounds, college kids and other professionals. During his tenure as a dealer, he garnered a reputation for honesty, spectacular sense of aesthetics, depth of knowledge and good humor. Lidstom died just days after the 1976 Tucson Gem and Mineral show wrapped up, having attended to see his friends one last time.

It is fitting that the Lidstrom award, established by his family in 1978 and continued by the Tucson Show Committee, would require competitive cases in its award. The award is given to the single best specimen in competition, as selected by the competitor. This last bit is an important caveat, because the award both honors a fabulous specimen, but also the competitor’s “eye” for selecting the best specimen they own. Many a Lidstrom has been lost due to a competitor selecting the wrong specimen. The selection is entirely subjective. It is awarded to the best piece in the eyes of the three quality judges, and to win Lidstrom a piece must be exceptional for its species as well as having great aesthetics. 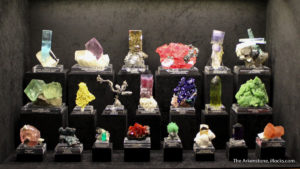 [box]To honor the memory of Paul Desautels, curator, collector and connoisseur of fine minerals, TGMS presents a trophy for the individual display of the finest crystallized mineral specimens entered in this competition.[/box]

Paul Ernest Desautels (1920-1991), an eminent curator, began his mineralogical endeavor at 14 in Philadelphia where he grew up. It was there collecting primarily as a micro-mounter that he would exchange specimens, knowledge and tales with other collectors such as Neal Yedlin, a micro-mounter for whom another award is given. Desautels would go on to receive both a B.S. and a M.S. in Chemistry from the University of Pennsylvania, and fight in World War II between his two degrees. After school he went on to become a chemistry teacher, though Desautels would occasionally teach courses in mineralogy, gemology and crystallography.

In 1957, Desautels began his renowned career as Curator of Gems and Minerals in the Department of Mineral Sciences of the U.S. National Museum of Natural History (Smithsonian Institution) in Washington, D.C., a position he would hold for 25 years. During his time at the Smithsonian, Desautels pursued acquisition with zeal, solidifying the Smithsonian as one of the greatest mineral collections in the world. The Carl Bosch collection, 25,000 fine mineral specimens acquired by the Smithsonian in 1970, was probably the greatest acquisition by the institution in the 20th century. He was also an incredibly influential figure in the minerals community, writing voluminous correspondence, a column on museums in the Mineralogical Record, a series of popular books on mineral and gem collecting, delivering hundreds of public lectures, and his relationships with a tremendous number of curators, collectors and dealers in the world.

It was through this influence that Desautels brought connoisseurship of minerals to the forefront of collecting, and helped usher in a new age in collecting. He also worked as an acquisition consultant for Texas oil millionaire Perkins Sams, whose collection was eventually acquired by the Houston Museum of Natural Science. Over his lifetime Desautels amassed many honors including:reception of the American Federation of Mineralogical Society’s Scholarship Award in 1967, induction in the Micromounter’s Hall of Fame in 1981, reception of the Carnegie Mineralogical Award in 1991, and reception of the Smithsonian Director’s Medal for outstanding service to the National Museum of Natural History. He was a Fellow of the Mineralogical Society of America, and founded the Baltimore Mineral Society. And so, when the McDole Trophy was retired, Desautels’ name was placed on the trophy representing the single best case in each year’s mineral competition. Desautels died on July 5, 1991.

BEST OF SPECIES OR THEME COMPETITION

Richard Bideaux was born on March 28, 1935 in Tucson, Arizona. As fate would have it, Bideaux became interested in minerals and began collecting in the local area with his father George. Later on he and his collecting partner Richard “Dick” Jones collected many notable Arizona specimens including wulfenite from both the Defiance and Glove mines. He stayed in Tucson for college attending the University of Arizona, and graduating in 1959 with a Bachelors degree in Geological Engineering. He was then drafted into the Army, and found his way to a base in New Jersey. While on the east coast, when he wasn’t training in computer programming, Bideaux visited mineral museums and befriended mineral collectors and dealers.

Upon departure from the service, Bideaux worked for the Jet Propulsion Laboratory in Pasadena, California. And once again the affable Bideaux became acquainted with many West Coast mineral collectors and dealers when he wasn’t working on the Lunar Survey. Bideaux then went back east to Harvard, where in 1968 he graduated with a master’s degree in mineralogical science. He then returned to his hometown and founded Computing Associates, Inc, a company working on computer applications in geology and mine engineering. In 1978 the University of Arizona conferred upon him the professional degree of Geological Engineer for his achievements in computer science.

Meanwhile he also brought together Arthur Montgomery and John White, who founded the Mineralogical Record in 1970. Bideaux’s column “The Collector” appeared in early Mineralogical Records as well as his incredible article on Tiger, Arizona. Along with Sid Williams and mineralogy professor John Anthony, Richard wrote Mineralogy of Arizona  in 1977. Two years later, following the death of his father, Richard took over Bideaux Minerals, and it was through this outlet that fantastic minerals specimens found their way into private collections and museums around the world. In 1980, Bideaux along with John Anthony, Ken Bladh, and Monte Nichols took on the six-volume Handbook of Mineralogy, one of the most important books of mineralogical reference. He was a founder and first president of Friends of Mineralogy, a life fellow of the Mineralogical Society of America and a member of the Arizona Geological Society. Bideaux was a key member in building the collections of the University of Arizona Mineralogical Museum as well. And on top of all of that he was a major component of the Tucson Gem and Mineral Show for 50 years helping to turn it into the international phenom it is today.

Richard had a mineral, Bideauxite, named after him by Sid Williams in 1970 as well. But above all, Bideaux was a collector. He collected throughout his life, a large part of which was self-collecting, and although he sold the majority of his collection in 1985 his love for collecting a minerals remained till the end of his days in 2004. Bideaux didn’t just collect minerals, however, he also garnered a label collection of over 3,500 examples which were donated to the Mineralogical Record Library and forms the backbone of the Mineralogical Record Label Archive. Richard Bideaux inspired many mineral collectors, not only to collect and appreciate the minerals, but also to take a genuine scientific interest in better understanding the specimens that we all love to collect.

[box]To honor the memory of Neal Yedlin, noted micromounter and mineral collector, TGMS presents a trophy for the individual display of micromounts achieving the highest score in the Masters Micromount Division.[/box]

Want to learn more about competing in the Tucson Show? Get in touch to ask us about curating your collection.

To learn about one of our favorite young collectors and her experience competing in a variety of the TGMS mineral competition categories, visit “Growing Up Rocks – Lauren Megaw’s Mineral Story.”

Lauren also wrote a note about showmanship and how to prepare a display for the annual Tucson Gem and Mineral Show mineral competition. Don’t miss reading her story!