We're honored to have been entrusted with the deaccession of a selection of Jack Halpern's famed collection of fine minerals, many of which are coming to market this 2020 Tucson Show. Friend and mineral collector Lauren Megaw shared some thoughts, history, and personal interactions with Jack here, by way of introduction.

Definition of “Gentleman” in the Oxford dictionary: 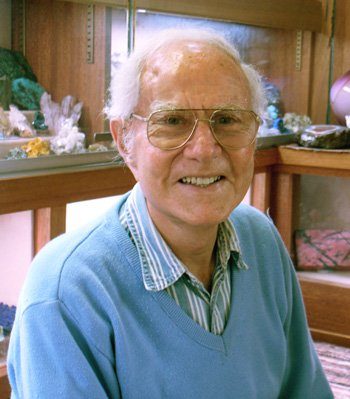 Jack Halpern in front of minerals, at age 90. Photo from the Mineralogical Record Label Archive page.

Jack is the type of person who likes to revel in the joys of life, and it's absolutely contagious. When you recognize Jack strolling down the aisles of a mineral show, you smile. It’s an automatic response, and it's probably because you associate the wiry frame and hallmark bolo-tie with a man who is genuinely interested in the world. He believes that appreciating beauty is one of the greatest joys in life, and says so frequently as he pushed 100 years old this year.

Jack Halpern was born in Brooklyn to a couple of Jewish European immigrants who ran a stationary shop. Which is fitting considering Jack spent his later years selling paper goods, though on a larger scale. As part of the Greatest Generation, the upheaval of his youth transformed and shaped Halpern’s life. After joining the Navy during the onset of World War II, he was shipped off to Treasure Island in San Francisco Bay to learn how to use radar. Halpern entered the Navy as a NYU college student and left 13 years later as a Lt. Commander.

Rob told me a story about a shocking dinner he once had with Jack, back in the 1990's, when they were talking about his career and Jack brought those years up. It turns out that Jack, because he had no specific expertise on the Navy ship at the time, was designated to the newfangled "RADAR detail" to be trained by the scientists who developed the technique. Jack did not just USE radar in the US Navy...he was literally on one of the first teams trained to use it, and he then trained others throughout his career there. He retired with honor after a successful career. Yes, he was one of the first people to use radar. Crazy!

On his first leave in San Francisco fate took him to the opera, and her name was Leslie Baer. They fell in love, married in 1943 and had a pair of daughters, Jean and Leslie. They also shared a love of collecting, Jack with his minerals and flowers and Leslie with her antique knives and spoon holders. Sadly, Leslie passed away in 1995, though Jack still speaks of her fondly.

Like so many collectors, Halpern’s first significant interaction with minerals was a life-changing event. He often even goes so far as to say he was “reborn” in 1962 when he first toured the California Academy of Sciences mineral collection. Something about the form, geometry and color captivated him. According to legend of the story, which he told many times, he thought they were too beautiful to be real; however, after being persuaded of their authenticity he was hooked! (Though there were always a couple of giant synthetic alum crystals in the cases, because they were fun looking and he collects for beauty foremost, he says)

Only as I wrote this did i get the rest of that story from Rob: that Jack apparently expressed his dismay to his wife at the beauty of these "carvings" rather loudly and accidentally in the presence of Curator Jean Demuth, who was on the gallery floor at the time and overheard him. She immediately corrected him, and seeing he was hooked directed him to go to his first Gem and Mineral Show in San Francisco in the early 1960s. He already was a rising star in collecting Orchids and flowers, and had the "collecting bug" which transferred to minerals. It was his wife who parlayed his former Navy salary and his later salary as a salesman of stationary forms, into brilliant investments in the stock market, and provided enough income for them to indulge their hobbies in retirement. Jack always admitted he had no financial sophistication, and credited her highly. 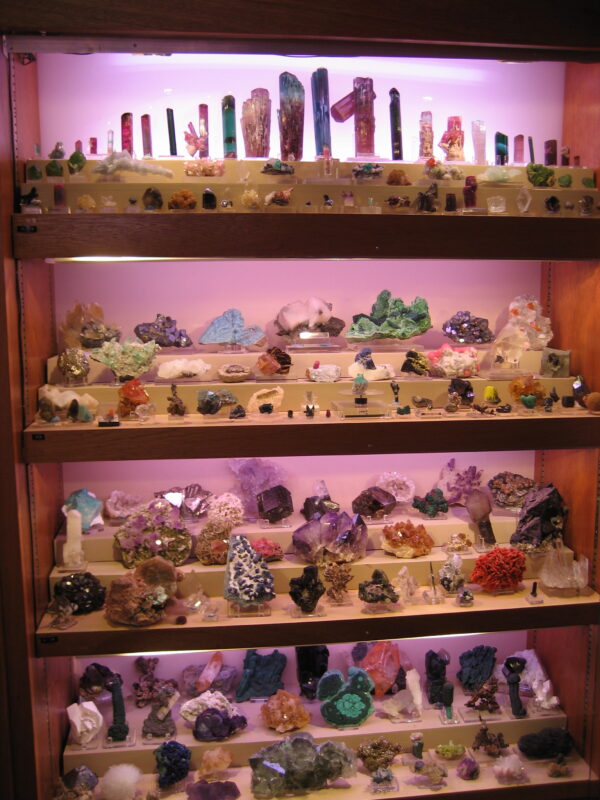 Halpern believes in the power of relationships. Relationships with fellow collectors and dealers, both. After all, a good dealer is worth their weight in gold. In the early years, Halpern bought nearly exclusively from Walt Lidstrom - which made his wins in 99’ with his twinned Cubanite (only recently deaccessed) and again in 2007 with his Zoisite var. Tanzanite even more special. While I wasn’t born yet, the stories abound of the magnificence of Jack’s collection prior to the Loma Prieta earthquake. Jack’s house was a short distance from Candlestick Park where the quake was felt strongly and after peeking into his basement, he didn’t go back down for months. However, the damage was minimal and mostly insured. This did not turn him away from collecting, as it was a part of him, and he redoubled his collecting in fact. He filled all the wall-to-wall shelves in his basement, this time anchoring every one of thousands of specimens with both mineral putty and plastic bases when needed - and renewing his insurance.

By 2003, Jack’s home and garden teemed with over 400 orchids and roses, and the basement contained dozens of display cases filled with nearly 3,200 specimens! Yet each and every one of them were there because their aesthetics Sparked Joy[1] for the vivacious gentleman. Jack was interviewed by newspapers in the Bay Area, and started running tours through his home for both kids and the elderly/retired community. Many believe that his was the most-seen private collection in the country, for this reason. Rob told me that on many visits in the 1990s, he'd have to wait upstairs until after school field trip hours for Jack to finish escorting a group of 20-30 schoolkids through the collection, and Jack often urged the elderly in their retirement homes to make bus trips to his basement (which was conveniently accessible by a sloping driveway, even for wheelchairs). 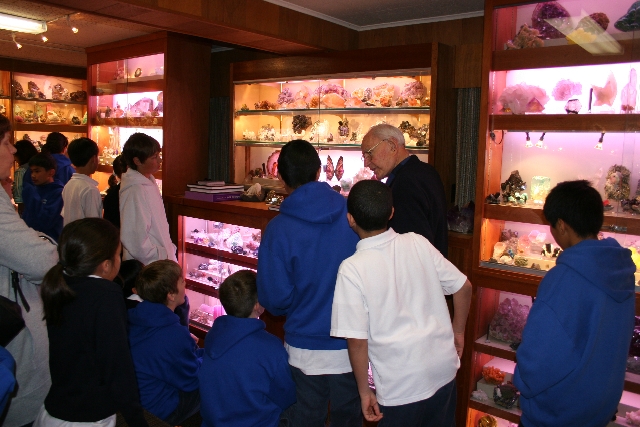 "...I admire their beauty. And I admit: I'm addicted to them."
- Jack Halpern during a 2003 interview with the SFGate about his mineral exhibition at Pacific Orchid Exposition at Fort Mason.

While looks and form were a must for Halpern, strategic and disciplined acquisition was required to put together a singularly exquisite collection. He did this by seeing as many examples as he could by going to shows and museums, visiting friends’ collections, and reading his favorite mineral magazines. He wanted to buy one of everything, and size and price did not matter. He was just as happy with a $100 specimen as with a $10,000 specimen. Essentially, Halpern was building a visual database and if his collection is anything to go by, he did a marvelous job!

This shockingly-blue krohnkite specimen (accented by natrocalcite) is one of the fantastic specimens (Ex. Jack Halpern) that we’re showing at our La Fuente tent location this year. Visit us before we close on Feb 15! . Chuquicamata, Antofagasta, Chile

In Halpern’s 2005 for the Mineralogical Record, “Criteria for Selecting Crystallized Minerals for a Display Collection”, he laid out a fantastically articulated breakdown of the identification and acquisition of visually delightful specimens. Honestly, it is probably one of the most important reads for new and upcoming fine mineral collectors. Picking specimens a multivariable problem that Jack, giving you the benefit of his years of collecting, makes approachable and understandable. He’ll even make you feel better about buying something expensive - so long as it's an excellent piece! Perhaps that is a lesson to learn from a man who ended up having 2 species of orchids named after him: mediocre will always be mediocre, but quality has the chance to become something important. You finish the article feeling empowered to go forth and assemble the collection of your dreams!

Jack believed that collections were also for sharing with others - whether that was his mineral friends or a group of children who visited his home. Maybe one of them would also have a moment of rebirth! He likes to say that through each visit, each interaction, each memory, our fondness for the minerals grow. Perhaps this is the reason some collectors get so emotionally attached to their specimens. They are an extension of us, our friendships, and our experiences. And perhaps if your heart is as big as Jack’s, you need the extra room.

Emerald Specimen - Pre-trim (markings for where to trim) 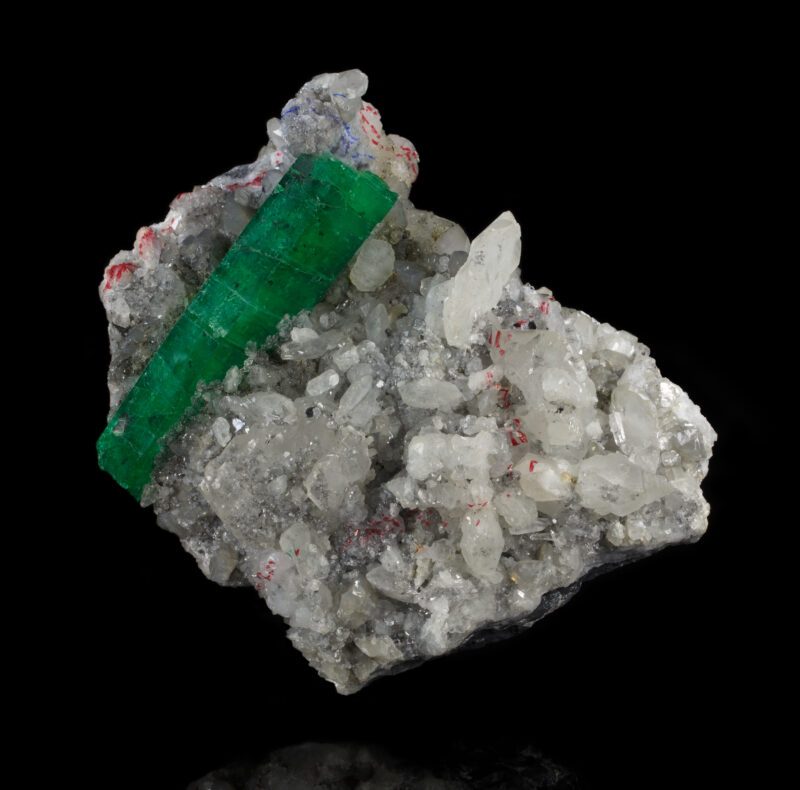 Emerald specimen before trimming from the Jack Halpern Collection. © BVA for The Arkenstone 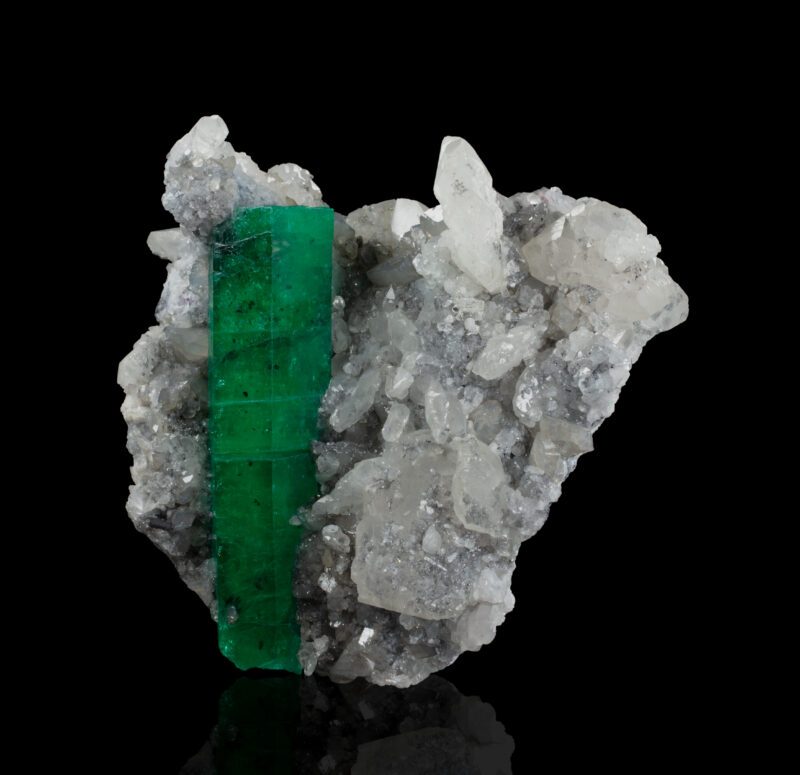 Emerald after trimming, from Jack Halpern's Collection. © BVA for The Arkenstone

I remember in all my interactions with him that Jack was an absolute, old-school gentleman. He wrote to his friends, dealers, and dealer-friends, long letters in beautiful cursive where he expounded on his enjoyment of time spent with friends and minerals. He wrote an entire letter to Rob saying how much he appreciated his chocolate Birthday cake! At the Arkenstone, I saw a stack of letter after beautiful letter about visits, and about their mineral dealings and trades, and there is something so personal about an old fashioned letter. Though perhaps his most touching letter, was about how he missed a particular Rhodochrosite he’d just exchanged to Rob about ten years ago. It wasn’t the lament of someone having sold an object, but rather of a parent letting their child go off into the world. That’s the kind of person Halpern is : the kind who seeks beauty in the world and makes friends with rocks.

Growing up, I knew Jack was a force of aesthetic collecting and respected him but did not know him well. Though mostly I knew him as a kind older gentleman. Then one year during the Tucson Gem and Mineral Show when I was a young teen, Jack struck up a conversation with me about the qualities of a truly great collection. He believed that truly great collections were those selected for the sole purpose of being visually delightful to the collector’s eye. In the truly great collections, Halpern feels there is a sense of that particular person. Then he turned to me and said, “I saw your case, and I must tell you, I could tell it was your case.” That comment matters so much to me, and I keep in mind Halpern’s idea of the mark of a great collection.

[1] Yes, this is a Marie Kondo reference