Pyrite vs. Gold: A Tale of Two Origins

At a glance, pyrite and gold are nearly indistinguishable from one another. Pyrite, otherwise known as “fool’s gold” has a similar luster and a goldish color that shines like the real deal. In some instances, they can be mined in the same locations. This makes it even more difficult to spot gold from a pile of pyrite (or vice versa). While the two minerals may share a similar appearance, their origins are much different. 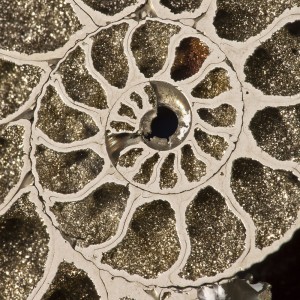 Long ago, pyrite filled in the fossil remains of an ancient creature similar to a large snail. The result is this fantastic work of natural art – a pyrite mineral specimen in a truly unique form.

Pyrite is a unique metallic mineral made of one iron and two sulfur atoms. The reaction used to form pyrite is highly complex as it involves the decomposition of organic matter in dissolved sulfate within sedimentary rock.

In some instances, pyrite has been found to cover or completely replace the remains of prehistoric creatures like ammonites and trilobites.[1] Many of these specimens are found within layers of sedimentary rock that were once covered by the ocean.

The ancient waters were low in dissolved oxygen, allowing for large numbers of sulfate to grow and reduce bacteria the necessary bisulfide.[2] This byproduct is highly reactive with iron, the most abundant of all metals, to create compound iron sulfide or pyrite that we see today.

Iron sulfide is a special type of compound called polymorphs whose crystal structure creates a multitude of minerals. For example, pyrite and marcasite are both made of iron sulfide, but each have a distinct crystal structure that makes them a unique mineral. Pyrite has a cubic structure with a metallic luster and gold color. Marcasite has an orthorhombic crystal structure and is easily damaged when mishandled.

Despite having a complex formation process, pyrite crystals are found in abundance throughout the world. The most famous mining localities for massive pyrite specimens are in Peru and Southern Europe. 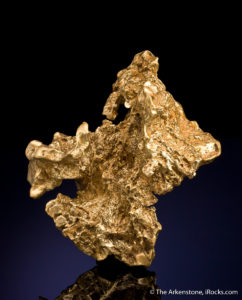 At over 50 pounds, the Ausrox gold nugget has been on exhibit in the Perot Museum, Houston Museum of Natural Science, and the Melbourne Museum.

Gold’s Shine Comes from The Heavens

Despite sharing a similar appearance, gold and pyrite couldn’t be more different. Gold is highly rare and valued for its properties. Unlike other metals, gold doesn’t tarnish and is easy to work with. The mineral is malleable enough to create wire or flatten into thin sheets for detailed shapes.

Another key difference between the two is that gold is an element. The crystals cannot be formed like pyrite, only bound together produce gold nuclei. Some theories suggest that the source of much of Earth’s gold comes from the explosion of distant supernovas.[3] The end of a star’s life is volatile and many elements with high atomic numbers are produced. When the star explodes, these materials are flung into space and some of the product landed on Earth.

Other theories suggest that some of the gold was produced through natural geological forces in the Earth’s core.[4] When molten rock is carried to Earth’s surface, other elements with smaller atomic numbers around bound with free roaming neutrons to produce gold ore. These ores can be found within the veins of other ores like copper and iron.

Although pyrite and gold look similar, the way they’re formed couldn’t be more different. Pyrite is highly plentiful and found in virtually all parts of the world. On the other hand, gold is incredibly rare and some scientists are pointing towards space as their place of origin.

Looking to add pyrite and gold to your mineral collection? Follow the Arkenstone on their many mineral shows throughout the year! Information on the shows we’ll be attending can be found on our Mineral Shows page. We’d love to meet with you and talk about the specimens in our collections!

[1] “What is pyrite?”. Discovering Fossils. http://www.discoveringfossils.co.uk/pyrite_formation_fossils.htm

[3] Joseph S. “All the Gold in the Universe Could Come from the Collisions of Neutron Stars”. Smithsonian Magazine. http://www.smithsonianmag.com/science-nature/all-the-gold-in-the-universe-could-come-from-the-collisions-of-neutron-stars-13474145/