Fluorescent Minerals: Give it a Glow 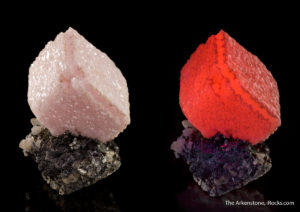 This calcite crystal (left) is shown on the right in fluorescence under UV lighting. From the Robert Lavinsky Collection of Fine Chinese Minerals.

Fluorescence is a phenomenon that causes a mineral to glow under exposure to UV (or, ultraviolet) light – a form of electromagnetic radiation undetectable to the human eye. Whether exposed to UV light from the sun or an artificial source (such as an ultraviolet lamp), fluorescent minerals undergo an atomic reaction which causes a pronounced visual effect in the absence of white light.

How exactly does this work? Well, the electrons surrounding an element's atoms maintain a specific orbit. This orbit (referred to by scientists as the valence level) is generally stable – but when a photon of UV light strikes the electron of a fluorescent mineral, it reacts. The added energy causes the electron's valence level to rise temporarily, increasing its speed of orbit. When the electron's valence falls back to normal, the absorbed energy is released in the form of a new photon. The new photon emits light at a longer wavelength than the stored energy, resulting in the phenomenon we perceive as fluorescence. 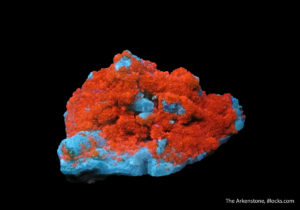 This piece is stunning under regular lighting (click to view!) but is a whole different type of amazing under UV light. Smithsonite on Willemite from Namibia

Ultraviolet light can be classified as either longwave or shortwave. It is interesting to note that some fluorescent minerals appear to glow the same color in both wavelengths, though others may react to only one or the other (or even fluoresce as different colors, depending on the exposure). When the type of fluorescence is not specified, shortwave is implied.

The phenomenon was described and named in the mid-1800s, by researcher George Gabriel Stokes. While studying specimens of uranium glass and fluorspar (fluorite), he noticed that the specimens transformed “invisible light beyond the violet end of the spectrum” into a strange, blue glow. The phenomenon was then named after the fluorite specimen in which it was first observed. 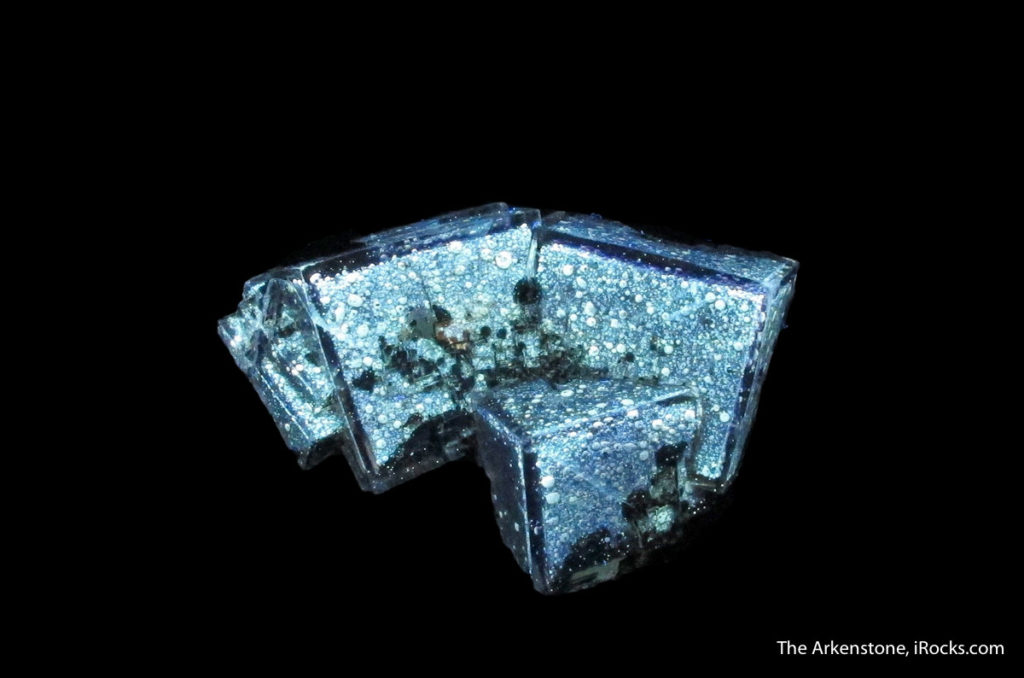 From the Ross Lillie collection, this fluorite has an otherworldly appearance. Click the image to see it under regular lighting!

There are a few minerals that will fluoresce when pure. These are called "self-activated" minerals, and include scheelite, powellite, and several uranium minerals. Others suspected of being self-activated include benitoite, cerussite, anglesite and perhaps many other lead minerals.

Fluorescence is sometimes confused with phosphorescence, a different phenomenon which also involves atomic mineral activity. When a phosphorescent mineral's electrons are struck by UV light, they remain in an agitated state for a much longer period of time – long enough that they will continue to emit a visible glow for a period of time which may extend several minutes. 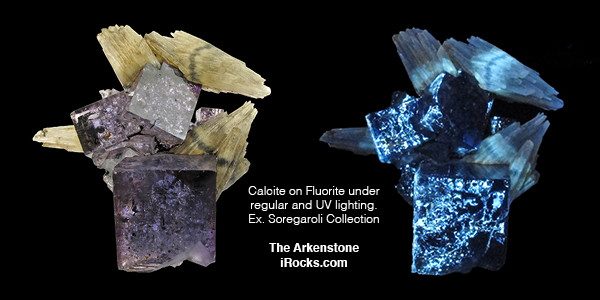 About 15% of identified rock and mineral specimens are fluorescent mineral species – though not all fluorescent specimens will actually glow under UV light. In fact, most pure minerals will not fluoresce. In order for the phenomenon to occur, the mineral must also contain trace impurities known as activators. In small amounts, activators contribute to the fluorescent effect – though too much of a good thing can have the opposite effect. Common activators are usually metals such as lead, boron, chromium, and manganese – though some organic materials may have a similar effect. The presence of iron or copper will dampen or reduce the effects of fluorescent minerals.

The most common fluorescent minerals include calcite, fluorite, and sodalite – though there are many others. Many gemstones (such as diamond, ruby, emerald, amber, and opal) will also fluoresce when exposed to UV light.

Minerals of the same species which originate in different locales may fluoresce in different colors, due to a variation in trace impurities – while others may not react at all. Because of this variation, fluorescence is not a very reliable method for identification, though it may still be used an an indicator, in combination with other methods.

For collectors of fluorescent minerals, the defunct mines at both Franklin and Ogdensburg, New Jersey, are notable locales. The two sites are home to more than 260 minerals. At least 56 of those exhibit fluorescent properties – and many rare specimens are found only at these locations. Ogdensburg's Sterling Hill Mine reopened in 1999 as the Sterling Hill Mining Museum, home to the Thomas S. Warren Museum of Fluorescence, a permanent exhibit dedicated to the exploration of this amazing mineral trait.

For more interesting articles on rock and mineral collecting, take a peek at The Wisdom Pocket Blog – or click here to view the stunning collection of fluorescent minerals for sale at iRocks.