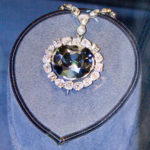 The beauty of gemstones has inspired countless stories of great battles, tragedies, and supernatural events. While some gemstones can claim these stories as merely legends, there are a few whose history is riddled with unfortunate events. With Halloween just around the corner, we’ll be exploring the peculiar histories of famously cursed gemstones.

Starting this series is the Hope Diamond, one of the most beloved—yet cursed—gemstones. At first glance, the Hope Diamond will capture anyone’s attention as it is the world’s largest deep blue diamond.

Most diamonds are of the clear variety, but the Hope Diamond shines a brilliant deep blue. This is due to the boron impurities interacting with light within the crystal structure. Diamonds with boron are extremely rare, and a diamond the size of the Hope Diamond is even rarer.

In display at the Smithsonian National Museum of Natural History, the diamond weighs an impressive 45.52 carats and is believed to be originally owned by King Louis XIV of France.[1] If that wasn’t impressive enough, early records show that the diamond originally weighed approximately 115 carats when it was mined from the Kollur Mine in India.[2]

The Curse of the Hope Diamond

A Diamond for the Sun King

The Hope Diamond was bought by King Louis XIV of France in 1668.[4] Known as “the French Blue”, the flat cut of the diamond was made to reflect as much light as possible—like a glass window. For diamonds of this size, the cut is unusual. Some scholars believe this cut was chosen to simulate the sun, as King Louis XIV often referred to himself as the “Sun King”.[5]

King Louis XIV of France would later die of gangrene, and all but one of his legitimate children died in early childhood. King Louis XVI and Marie Antoinette, who later inherited the Hope Diamond, were beheaded. The Hope Diamond would stay with French nobility until 1792 when it was stolen during the French Revolution.

The Hope Diamond wouldn’t be seen again until it resurfaced in London, England in 1812 by London jeweler John Francillon.[6] Records suggest that the diamond was acquired by King George IV of the United Kingdom. However, the diamond entered private ownership in 1830 when it was sold to pay off King George IV’s debts after his death.

The diamond was purchased by famous collector Henry Philip Hope, whom the Hope Diamond was named after, in 1839.[7] Henry would then die that year, and the stone was inherited by Lord Francis Hope. Francis Hope would make a series of poor investments and go bankrupt. To pay his debts, he was then forced to sell the diamond.

After changing hands multiple times, the Hope Diamond would find its way in the hands of Washington socialite Evalyn Malsh McLean in 1912.[8] Shortly after obtaining the Hope Diamond, Evalyn’s son was killed in a car accident and her daughter committed suicide. This led to Evalyn having a mental breakdown, and she was later committed into a hospital.

It is believed that nearly 10 people associated with the Hope Diamond either died a horrific death or were injured. The most recent incident happened to James Todd – the mailman who brought the Hope Diamond to the Smithsonian. Todd was hurt in two car accidents soon after the delivery, and he later had his house burned down.

Since 1958, the Hope Diamond has been at display at the Smithsonian National Museum of Natural History. To date, there has been no incident of a visitor suffering a tragedy.

Love diamonds? Shop for your own!

Searching for a rare stone? Then explore our expansive collection of rare rocks and minerals! We’ve recently updated our galleries with many impressive specimens from around the world. You can find our latest collections here.

[4] Joseph S. “The Hope Diamond Was Once a Symbol for Louis XIV, the Sun King”. Smithsonian. http://www.smithsonianmag.com/science-nature/hope-diamond-was-once-symbol-louis-xiv-sun-king-180949482/?no-ist

[6] “The Hope Diamond”. The Smithsonian. http://www.si.edu/encyclopedia_si/nmnh/hope.htm