Opening of the David Friend Hall!

Announcement: Celebrate the Opening of the David Friend Hall at the Peabody Museum!

The Yale Peabody Museum of Natural History will open its doors to the David Friend Hall, an extraordinary showcase of gemstones and premier minerals from the world’s top collections in late October 2016. Coinciding with the Peabody Museum’s 150th anniversary, the event will feature more than 150 of the world’s finest specimens, integrating free-standing visual displays with custom lighting to enhance the otherworldly features of each specimen. 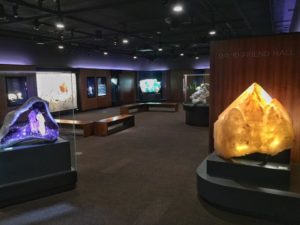 The Peabody Museum opened to the public in 1876 with a mission to advance the understanding of earth’s history through geological, biological, and anthropological research by communicating the results of Yale University’s research through exhibition.[1]

The museum has hosted many world-famous exhibitions throughout its history, including a complete Brontosaurus in 1931.[2] In 1947, the museum introduced its breathtaking 110-foot fresco secco mural titled, The Age of Reptiles by Rudolph F. Zallinger, which earned a Pulitzer Award for Painting in 1949.[3]

As the museum’s collection grew with additions including ancient Egyptian artifacts and massive dioramas on the plant and vertebrate ecology of Connecticut, it found itself needing to expand its facilities. In recognition of the importance of conserving the collections and studies of scholars, the new museum developed new buildings. Joining the tradition of expanding the Peabody Museum’s wealth of knowledge its most recent addition – the David Friend Hall.

The Start of a New Era: The David Friend Hall

This year, the Peabody Museum looks to impress the world once more with the grand opening of the David Friend Hall, hosting over 150 of the world’s finest mineral and gem specimens. The Hall’s namesake, David Friend, started his collection as a child when he discovered a pocket of mica and quartz crystals in a construction site near his home in New Rochelle, New York.[4] His spark into the sciences would then bloom into a successful career in engineering. He received his B.S. in Engineering from Yale University in 1969.

In 2014, Friend would later join the Peabody Leadership Council to help the museum pursue its mission to advance knowledge and understanding of Earth’s history, life and cultures.[5] Through Friend’s diligent work, the David Friend Hall, an ambitious 2,300-square-foot gallery, will open to showcase beautiful displays and educational public programs. Many of the pieces come from David Friend’s personal collection.

As part of the opening ceremonies, a lecture series was held with world-renowned mineral experts, including:

Ambassador Barbara Barrett - “Value Beyond Treasure: The important role museums have in advancing the next generation of STEM careers and discoveries.”

Barbara Dutrow, Louisiana State University - “The Many Faces of Tourmaline”

Jeffrey Post, Smithsonian Institution - “Minerals and Museums – What next?”

Bryan Swoboda of BlueCap Productions was on hand to tape these lectures and the historic opening event. 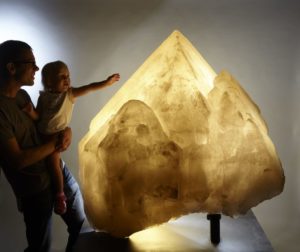 This 2,000-pound quartz crystal from Namibia will greet visitors to David Friend Hall. It will not be displayed behind glass. (Photo by Robert Lorenz, courtesy of Yale Peabody Museum.)

When visitors enter the David Friend Hall, they’re greeted by a glowing 2,000Ib quartz crystal from the Republic of Namibia, South Africa. The specimen dates back 500 million years, long before dinosaurs roamed the earth. Visitors are allowed to touch the amber-colored crystal and get a feel for its remarkably ancient history.

The hall will also host many of David Friend’s most prized pieces. Near the glowing quartz is a 3-foot-tall geode for Uruguay, lined with deep purple amethyst crystals and a massive Calcite crystal that joins a floor filled with crystals to its ceiling. Further in from the geode is an astounding 30-million-year old concretion of sandstone from Fontainebleau, France. This is the first time the concretion has ever been on public display.

Adding to the grandeur of the hall is a massive collection of many of the finest gemstones from private collections around the word. Included in the collection is the 77.12-carats “Yellow Rose” diamond and 75.41-carat “Blue Dragon” sapphire, courtesy of Christie’s New York collection.[6]

According to C.R. Beesley, a renowned gemstone specialist and chair of the Peabody Museum Mineral Board, “This phenomenal presentation will include over 800-carats of unique gemstones, many of which have never been seen on public display. With their remarkable size, impressive clarity, and classic depth-of-color, these gems can unequivocally be classified as world class.”[7]

As stated in a recent press release by the Peabody Museum, some of the gemstone that will be on display include:[8]

Sharing a Passion for Minerals - ELI

Treasures of the Peabody: 150 Years of Exploration and Discover - Wall Street Journal