The Copper Queen Mine was first discovered in 1877, and ever since, the history of this mine rivals the drama of an old western.  Silver and copper deposits were reported in the early 1870s, and in 1877 , rich outcrops were found for prospectors to dig into.

To set the stage, the Copper Queen Mine is situated, in what was then, hostile Apache territory in Arizona, and the U.S. Calvary patrolled the area. One day, they were searching for water in a canyon in the Mule Mountains of Southeastern Arizona, when they noticed outcrops that were tinted red with iron. These outcrops were said to contain cerussite, a lead mineral that was often found with silver; a good sign for prospectors. Sgt. George Dunn grubstaked (outfitted with provisions in exchange for part ownership) the area to George Warren to start the mining operation with a handmade map of the area.  Warren proceeded to get drunk in the Bruneko Saloon, told everyone within earshot about the discovery, using his name for the area, and then proceeded to lose his stake in the operation in a horse race. Warren was soon declared insane by his partner, and promptly committed to a state asylum in Phoenix in 1881. Shortly thereafter, his partner squandered his small fortune. When a group of miners heard about Warren’s plight, they managed to buy his freedom with a sack of sugar, and Warren emerged from Phoenix penniless. Even so, he almost immediately found himself jailed after wandering into Mexico. He finally returned to Bisbee in time for Christmas in 1892, but unfortunately caught pneumonia and died. Warren’s strange life came to a quick end, but he was responsible for getting the word out about the ores that people were looking for, and when the did, they named the mining district in his honor.

The tale of the Copper Queen picks up in 1880 when Benjamin and Lewis Williams and Judge De Witt Bisbee leased and bought multiple mining claims, including the Copper Queen. Bisbee was crucial to the area’s survival; he invested large amounts of capital to build a smelter in the town to save money instead of shipping ore to Wales, Arizona.  The town was named after him in 1880 when it transformed from a collection of tents and hastily constructed buildings to a real mining town. The Copper Queen Mining Company was formed, and the rich ores they discovered rewarded the investors. The discovery site was quarried until a massive pit formed, and a shaft and tunnels were then constructed to follow rich copper veins. By the time all was said and done, the mine had hundreds of kilometers of tunnels and stopes that were developed until nearly all of Bisbee mine became connected underground. Despite of considerable exploration, in mid-1884 it seemed only a few months of ore remained in the Copper Queen mine. The Phelps Dodge & Company had opened the Atlanta mine adjacent to the Copper Queen in hopes of encountering similar geology, but the initial results were not as good.  In one of the last mining efforts in the Copper Queen hit an ore body 60 meters in the main shaft. The same ore body was just discovered in the adjacent Atlanta mine at the same time. The Copper Queen Consolidated Mining Company formed from the two companies to give the mine a second chance. They held control over the area of Bisbee for 15 years until Phelps Dodge developed adjacent areas Copper Queen Consolidated had overlooked, and eventually took over the Copper Queen. 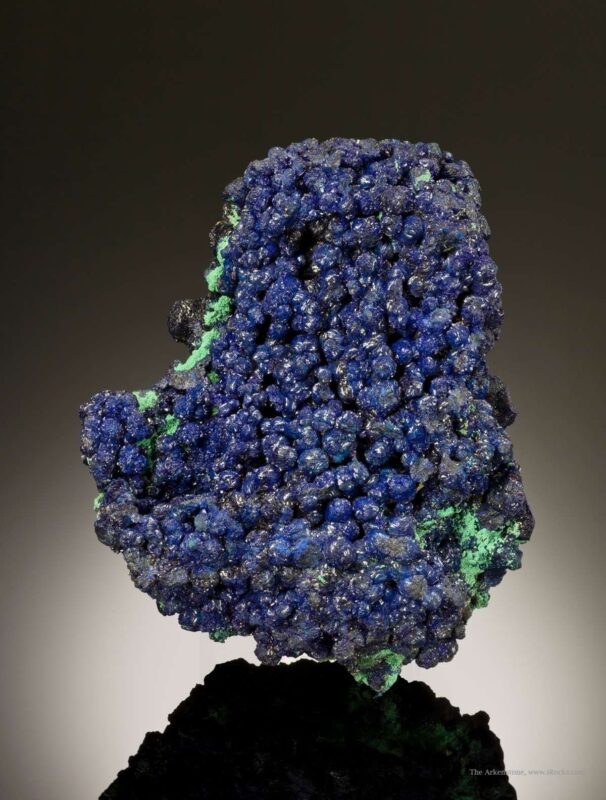 This is a large, very sparkly display specimen of azurite from the most classic era at the Copper Queen Mine, around the turn of the 1900s.

The Queen was always productive; lode after lode was discovered. In the hopes of continuing the fruitful production, The Phelps Dodge Corporation eventually took over the mining operation and had total control of the area by 1931. Ben Williams became the General Manager of the Copper Queen from 1882 to 1889 and had a stunning personal collection that was recently brought to market.  The equally impressive collection of S.W. Clawson, the Mine Foreman of the Copper Queen Consolidated Mining Company in the late 1890s and early 1900s resides in the LA County Museum of Natural History. Even the miners had personal collections, albeit with questionable provenance. The miners believed it was a birthright to sneak minerals out of the mine and take them home. They even had a saying that “a specimen was only stolen when it was stolen the second time.” No one really tried to stop the miners unless they abused this tradition by taking unnecessary risk or if the miners were taking too much time collecting on their own. The Bisbee area was one of the greatest copper camps on Earth, producing more than $6 billion in metals.  Today, great tailings and dumps remain to showcase the history of mining in Arizona.

The Copper Queen was among the most prolific mines in the Warren District.  The rocks of the Bisbee area consist of Precambrian quartz sericite schist basement overlain by 1,600 to 2,00 meters of Paleozoic, predominantly calcareous sediment. During the Jurassic Period the rocks were intruded by numerous stocks, dikes, and sills, then underwent several episodes of mineralization. The origin of the limestone is from a multistage intrusion along the Dividend Fault about 180 million years ago. These intrusions deposited around 450 million tonnes of pyrite!  Following the limestone intrusions, there was an iron/copper intrusion following along the same dikes. This intrusion led to significant deposition of copper in the Sacramento Complex that later became the ores that would later be mined. A third intrusion was a lead/zinc intrusion that replaced limestone deposits and were deposited adjacent to the pyrite and copper deposits. A fourth and final, small-scale intrusion brought a large amount of precious metals that would later prove to be economically significant. Just prior to the Cretaceous there was broad regional uplift that led to erosion of the Paleozoic sediment forming deep canyons. During the Cretaceous the rejuvenated Dividend fault dropped the southern block about 600 meters relative to the northern side. Later, in the Pliocene the region-wide normal faulting formed the topography of today.

The mineralization of the mine is high-grade copper carbonates with minor lead zinc and carbonates in irregular replacement ore bodies. The pre-existing networks of dikes, sills, faulting, and brecciation controlled the ore deposition. More than 320 species have come from the Bisbee area. Among the species produced are botryoidal azurites, soft tufts of malachites with azurite overgrowths, gypsum, aragonite stalactites, and some of the world’s finest blue-green spangolite in small vugs in cuprite that were lined with velvet malachite. Rare cuprite crystal groups in octohedral cubes up to 3 centimeters in red and in the stunning acicular chalcotrichite variety. Calcites in myriad colors with unrivaled inclusions of malachite or cuprite are also among the best specimens to come from the Copper Queen. The Copper Queen is famous for the malachites and azurites that have varying hues of blue and green, stunning ingrown/overgrown nature, and beautiful shapes.  Some of the most pristine specimens have concentric rings alternating with blue azurite, blue-green malachite, and brown limonite. There are stunning examples of native copper in dendritic and branching clusters often in parallel orientations, and examples with twinning. 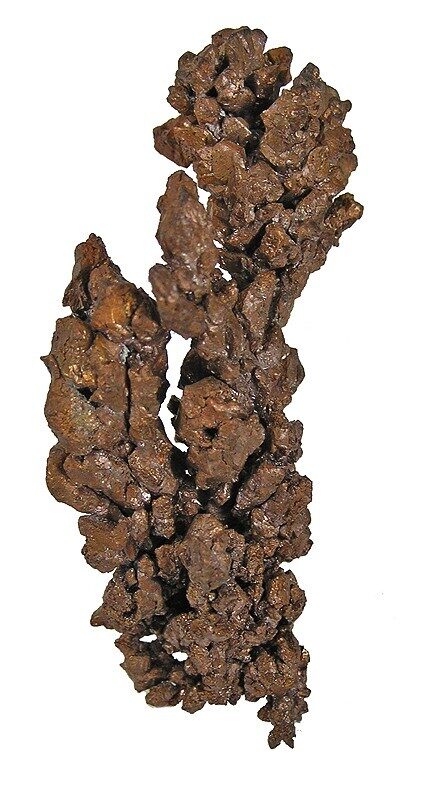 An old Copper Queen mine copper with branching form completely crystallized from top to bottom with sharp spinel twins.

The western action never seemed to stop in Bisbee.  In 1884 John Heath and his gang of robbers and murderers targeted the town. The townspeople tracked him down and hanged him from a telegraph pole.  The town had peaceful times, too. The cave was large enough to host events for the town: members of the Masonic order lived there and had a ceremony inside the Copper Queen, and Bisbee High School students held a prom in the Queen. When World War I came, unions sought to organize the mine and threatened to strike. County Sheriff Harry Wheeler marched 1200 strikers onto a train and had them shipped to New Mexico fearing the strikers would dynamite the shafts. The sheriff was brought to trial as a kidnapper, but the judge ruled in his favor saying the extradition was necessary to save the community.  President Woodrow Wilson even admonished the strikers, adding to the incredible story of the Copper Queen. 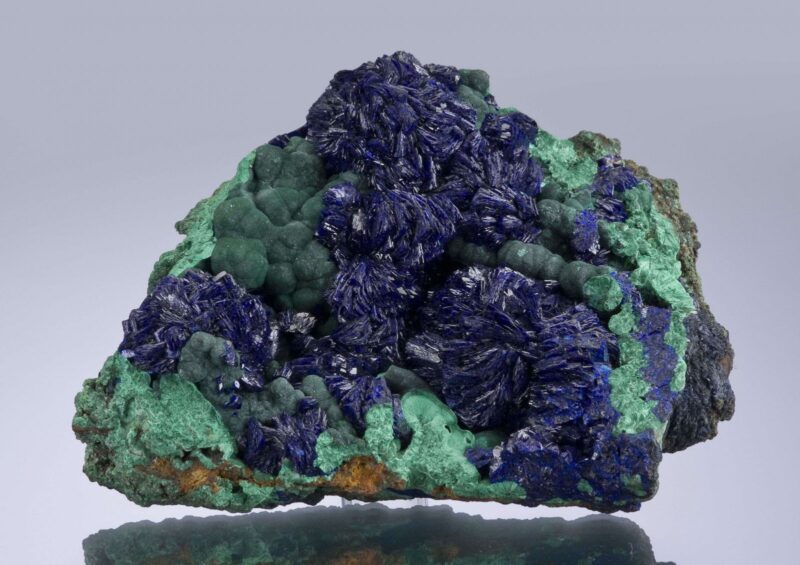