What's In a Name? Origin Stories of Stones

Fine minerals, rocks, and gemstones have been valued for their beauty since the dawn of time – and humans have been telling the stories of their origins since the beginning of recorded history. In fact, many of the common names for fine minerals recognized by collectors and enthusiasts today originate from folklore and legends describing the mythical origins of our favorite stones.

For those interested in rockhounding and collecting, these legends can provide interesting cultural background which expands our insight into the historical value of certain fine minerals, stones, and gems. We’ve provided some of our favorites for your amusement, below! 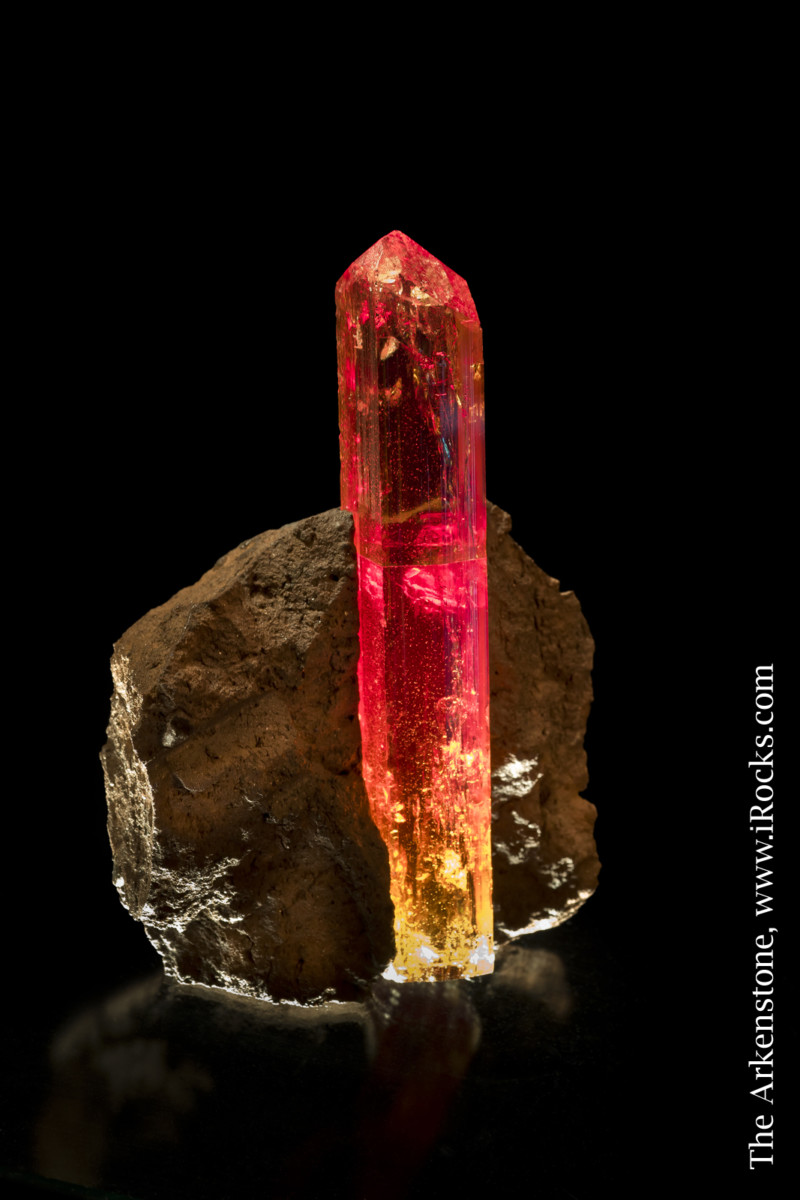 Topaz gets its name from a Sanskrit word which means ‘fire’, and Indian folklore attributes its bands to the light of the sun’s outstretched arms. The Romans had a similar theory, and they also associated this stone with Jupiter, god of the sun.The Ancient Greeks have a similar legend surrounding pyrite, whose name literally means “stone which strikes fire”. They believe that fire was a hellish element, whose fiery force and sulphuric smell were released when struck. The Incas, however, polished large slabs of the stone for use as divining mirrors.This topaz specimen is a special variety called Imperial Topaz, found in the Ouro Preto area of Brazil. Joe Budd Photo. 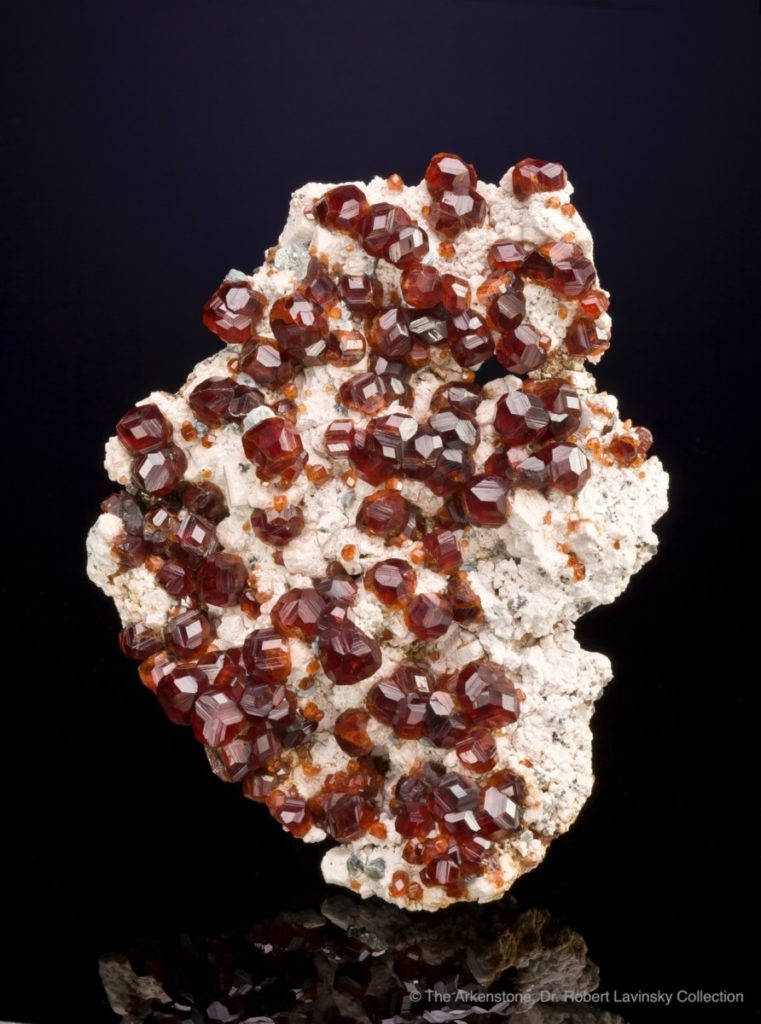 Garnet gained its name from the Greek word for seed. It is said that the color and appearance of small garnets closely resemble the pips of the pomegranate given to Persephone by Hades, in his attempts to keep her in the underworld. As such, the garnet was historically held as a symbol of unrequited love or rejected affection.These spessartine garnets from China are scattered across a white matrix in a stunning contrast of colors. Dr. Lavinsky collection, Joe Budd Photo. 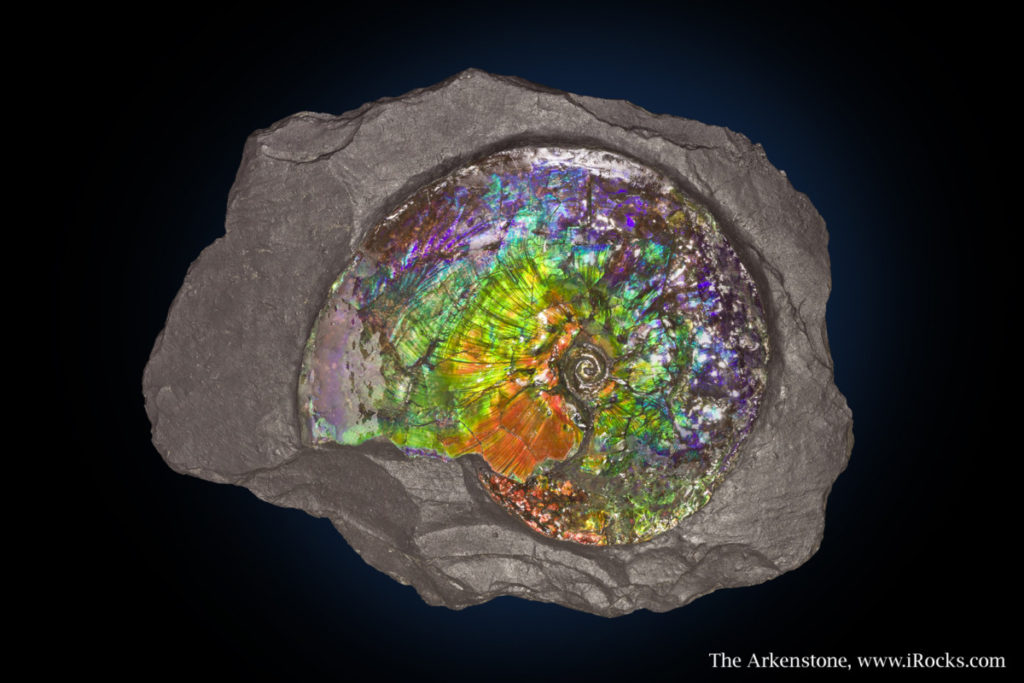 Though not actually a mineral, ammonites (the hard, fossilized shells of extinct mollusks) were known to Native American tribes as Buffalo Stones – named for their resemblance to the horns of the sacred North American bison. They were treasured for both their beautiful appearance and form, and were carried by the Navajo in their medicine bags as a token of good health and protection while hunting.Ammonites are found in different places throughout the world, often replaced by other minerals over time. Ammolite, as it is known in the gem trade, is an iridescent material that forms and has been found in Canada. World-class complete examples of ammonite fossils are hard to find, but many of the fragments have been turned into spectacular opalescent jewelry. Pyritized opals are also a beautiful example of minerals replacing fossil structures.The ammonite pictured is a rare example of a the species that has not been repaired. Many ammonites are composites or repaired. Joe Budd Photo 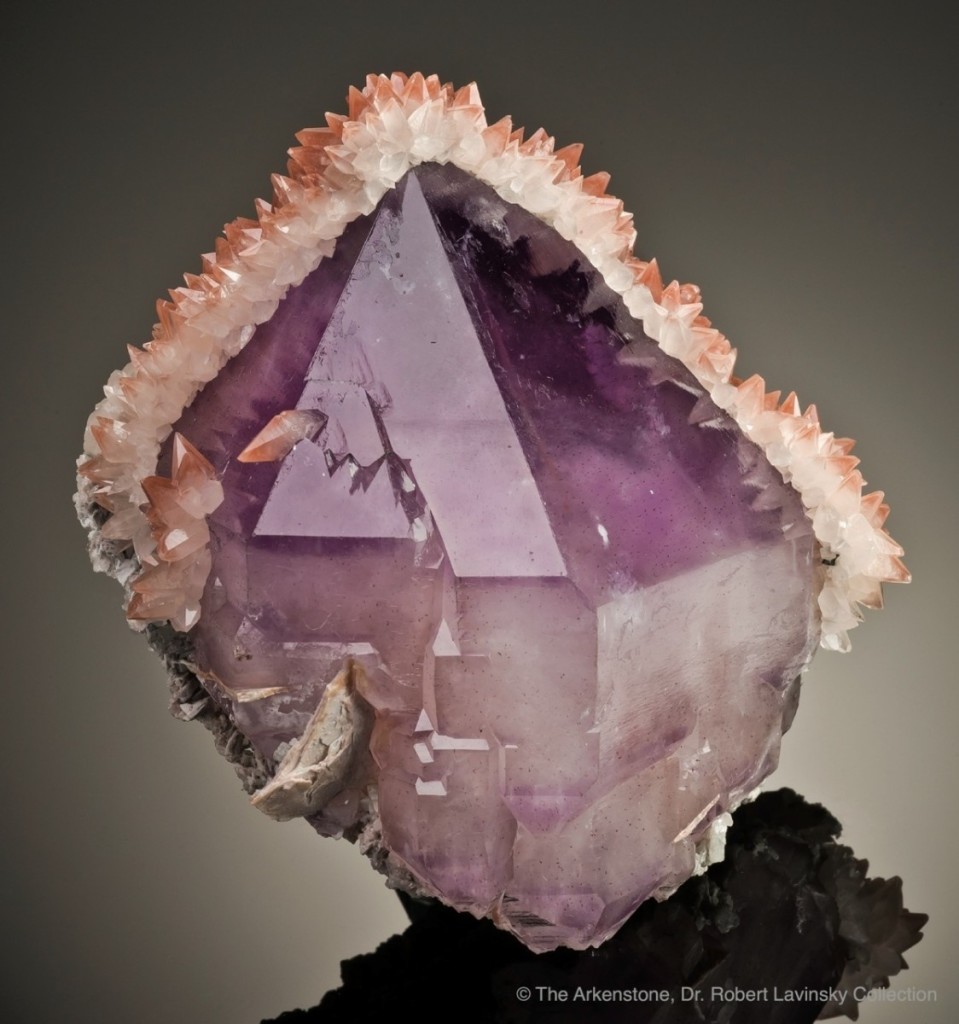 Greek mythology tells of a beautiful virgin named Amethysta who was spotted by the god Dionysus, god of wine and intoxication, on her way to worship the goddess Diana at temple. Dionysus detained her, and enraged with her attempts to refuse him, unleashed his tigers to devour her. Amethysta called out to Diana to save her chastity, and Diana turned her into a statue of quartz. Dionysus, when confronted with the results of his actions, cried tears of remorse which turned to wine, staining the stone a deep purple – thus creating the first amethyst.This amethyst crystal (with calcite accents) is part of Dr. Lavinsky’s collection of Chinese minerals. Joe Budd Photo. 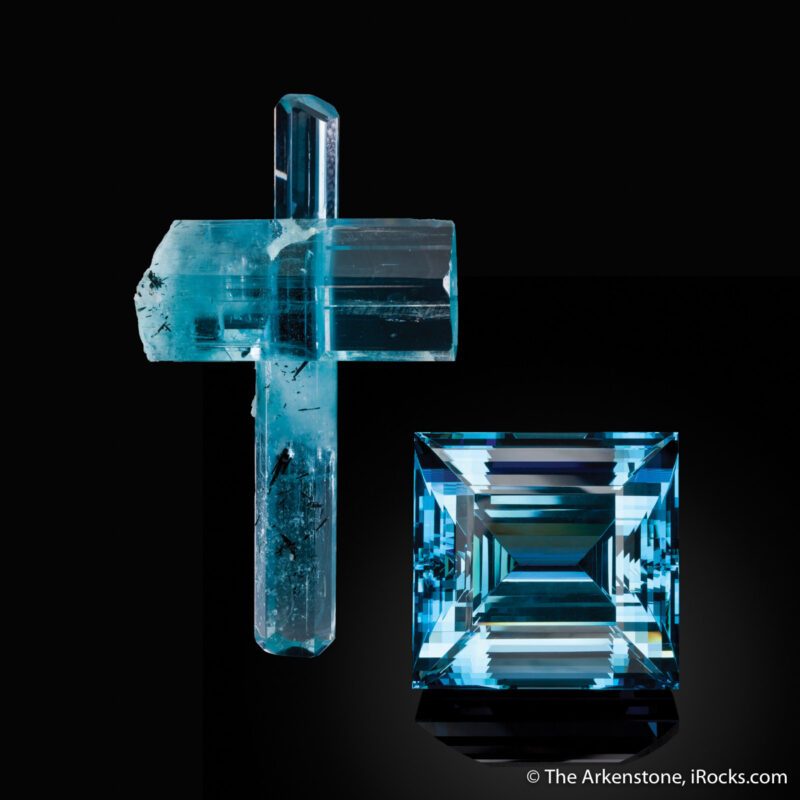 Aquamarine, a beautiful blue stone which belongs to the beryl family, gets it name from a very literal Latin translation of its color – aqua (which means water) and mar (which means sea) – though legend has it that its value was established not just through its beauty, but by association with its supposed origin. It was said to be the sparkling substance which made up the tails of mermaids. The Helix Aquamarine shown here is one of the world’s best uncut crystals in existence and weighs in at 7 kilograms. It is famous for the natural corkscrew formation spiraling down the crystal. Joe Budd Photo. (Video interview and more details with Dr. Lavinsky and Dr. Peter Lyckberg available here.) 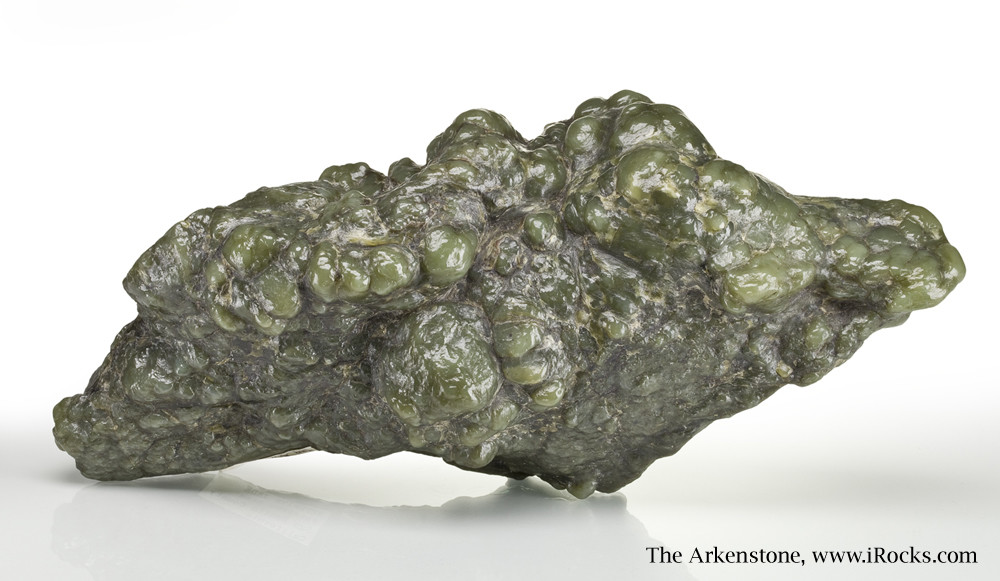 The Maori have a story which explains the origins of pounamu – their traditional name for nephrite. In their story, a supernatural being named Poutini discovers a beautiful woman bathing in the Bay of Plenty, and kidnaps her to have as his own. Her husband discovers that she is missing, and begins to track the god’s journey along the coast. Fueled by love, he gains ground on the supernatural being who holds his wife captive, until Poutini, realizing that he is close to capture, turns the woman into a stone of his own spiritual essence – pounamu. He then slips away, into the water, leaving the husband to discover this precious stone in his wife’s place. The West Coast region in which nephrite is most commonly discovered is still known as Te Tai o Poutini – The Tides of Poutini.

Though many of history’s common names for fine minerals and stones have since been replaced by their scientific classifications, it is still fun to explore the stories of their traditional names and origins. If you’re interested in learning more about rockhounding, collecting, and lore – check out The Wisdom Pocket for more articles of interest! Or, take a moment to browse our current collection of fine minerals and stones.