All About Pseudomorph Minerals

Pseudomorph mineral specimens are minerals or mineral compounds with atypical formation, resulting from a process of substitution or replacement. In description, pseudomorph specimens are generally noted as (replacement mineral) after (original mineral) - and the word pseudomorph literally means “false form”.

The specific conditions and process through which pseudomorph specimens form can vary greatly. Some pseudomorphs occur when one mineral covers or obscures another, and the first dissolves – while others are formed through a gradual, molecule by molecule process of replacement. No matter the process, the result is a mineral formation with properties which mimic or exhibit traits of another compound. These formations can be complex, diverse, and deeply interesting to collectors.

If your collection needs new pseudomorphs, check out the special pseudomorph mineral gallery on iRocks!

Substitution Pseudomorphs. Also referred to as “infiltration pseudomorphs” these specimens are formed when one mineral or material is replaced by another. The original formation's shape is preserved, but the original mineral undergoes complete chemical substitution by a subsequent mineral. The result is a specimen which maintains the shape and form of the original mineral, but with the color, hardness, density, and other properties of the second mineral.

This stibiconite after stibnite, part of Dr. Rob Lavinsky's private collection of Chinese minerals, is a stellar example of a substitution pseudomorph. Joe Budd Photo 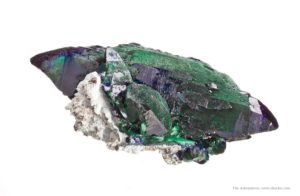 Alteration Pseudomorphs. The process of alteration is similar to that above, except that pseudomorph specimens which undergo alteration have experienced only partial replacement or substitution. This typically occurs in situations where the original mineral undergoes a chemical reaction to another mineral of similar composition – resulting in a transformation of chemical composition, which retains the original crystalline form. These changes often occur on “exposed” surfaces, resulting in a pseudomorph which contains a core of unaltered original material.

This malachite on  azurite shows the original azurite and the altering malachite crystals. Love the color combo? Shop more here. 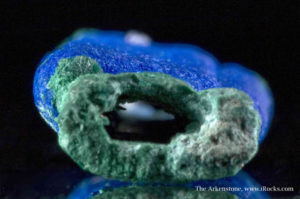 Perimorphs. Also referred to as “incrustation pseudomorphs”, perimorphs are formed when one mineral coats another, forming a crust of material which encases the original formation. This new crust remains intact, while the original mineral dissolves, resulting in a mold-like formation, with surfaces which exhibit the shape of both materials. This dissolution most often occurs through exposure to naturally occurring acidic solutions – though, in some cases, it can be purposefully induced.

We have an unusual specimen to show this strange formation. The piece shown here is hollow where a selenite crystal once existed. The azurite formed over the selenite, and at some point the selenite dissolved away and some of the azurite morphed to malachite. 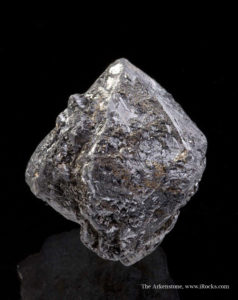 Paramorphs. Also called allomorphs, paramorphs are pseudomorph specimens which have experienced change only on the molecular level. Paramorphs maintain their original, unaltered form and chemical composition, but with a different molecular structure. Usually, this means replacement of a mineral by one of its dimorphs – a mineral with the same chemical structure, but a different molecule structure. (An example of this would be the pseudomorph Brookite after Rutile – as both have the chemical composition TiO2.)

This specimen is a spectacular example of a paramorph; an exceptionally rare twinned brookite crystal has been replaced by rutile. From Magnet Cove, Arkansas. Joe Budd Photo. 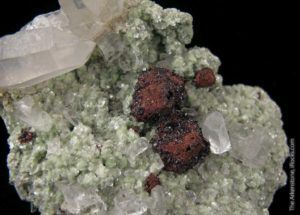 Epimorph. An epimorph is a mineral whose shape has been formed by its environment – usually, as a coating over an original mineral. The original may or may not have dissolved – but if it has, these pseudomorph specimens are sometimes referred to as “casts”. A geode is an example of an epimorph.

Found in the Mundo Nuevo mine in Peru, this combination specimen is a hubnerite epimorph of scheelite with quartz and muscovite. The piece was in Art Soregaroli's Collection for many years.

Pseudomorph specimens can occur under many conditions, and in varied locales – but some are more minerals are more prone to pseudomorph formation than others. Common pseudomorphs include: Copper or Malachite after Azurite, Malachite after Cuprite, Calcite after Aragonite, Limonite or Goethite after Pyrite, and Beta-Quartz after Alpha-Quartz.

Interested in learning more about pseudomorph specimens? Browse the Arkenstone's collection, here – to read descriptions of some of the finest pseudomorphs currently on the market!