Spotlight on Azurite: The Blue-Hued Beauty

Spotlight on Azurite: The Blue-Hued Beauty

Azurite [Cu3(CO3) 2(OH)2] is a rare copper carbonate mineral formed by either contact between carbon-dioxide-rich water and copper-bearing minerals, or through a reaction involving cupric salts and limestone. Azurite is generally found in massive form (though it occasionally occurs as prismatic crystals), and it is often associated with malachite, chrysocolla, or turquoise, in areas with significant deposits of copper. 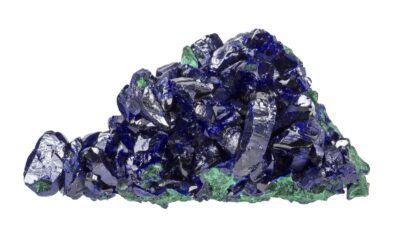 Strikingly blue Azurite Crystals with a bit of Malachite. From the Milpillas Mine in Sonora, Mexico.

Azurite is best known for its brilliant, distinctive blue color – which closely resembles that of lapis lazuli. Though its stunning azure blue hue makes gem-quality specimens extremely popular amongst collectors, azurite is not commonly used for adornment. With a Mohs hardness of 3.5 to 4, it is fairly soft, and its tendency to fade from blue to green with exposure to heat and light make it less than ideal for jewelry making.

This softness has, on the other hand, largely contributed to azurite's most well-known historical use – as a brilliant pigment, prized by painters.

Though its original discovered use was in Egypt, as a pigment and dye for textiles, azurite was also commonly used in the east, and its blue tones can still be seen in the cave paintings at Tun Huang in Western China, as well as in wall paintings in Central China which date back to the Ming and Sung Dynasties. 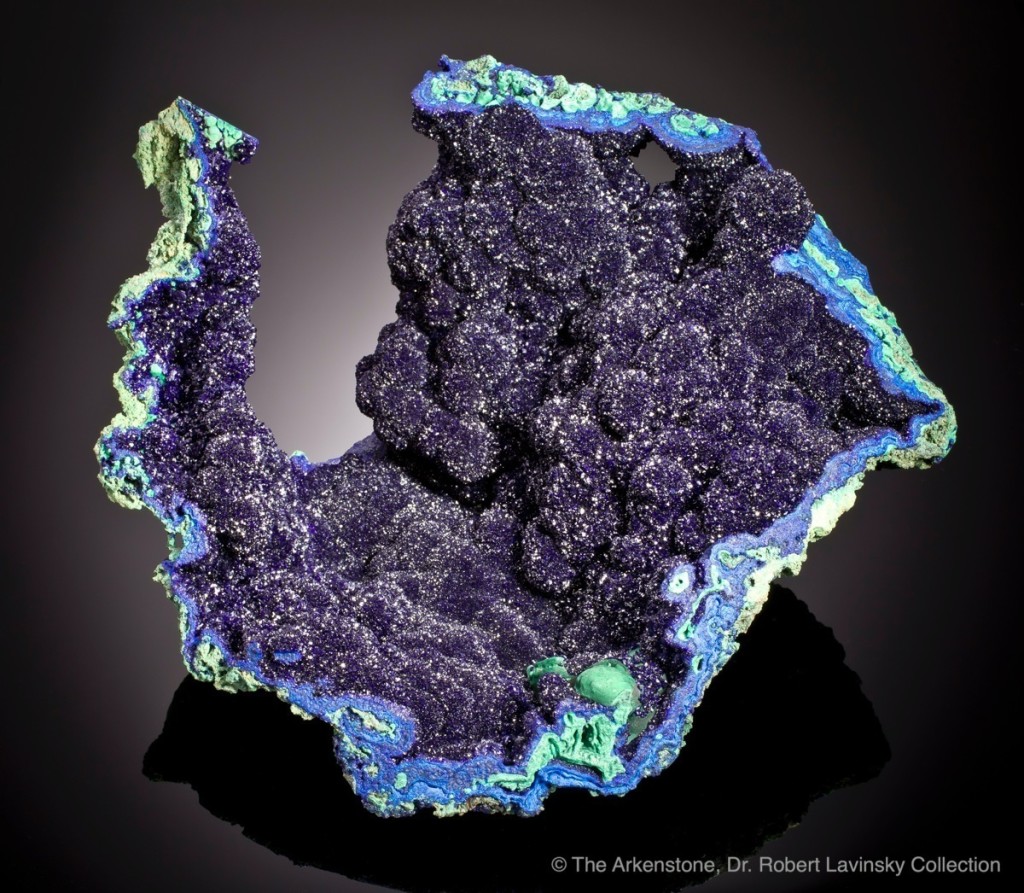 During the Middle Ages and Renaissance period, azurite was prized among European painters. It was used first in tempura and fresco painting, and later in oil. To make azurite pigment, masses of the mineral were collected and ground into powder, which was then washed, and run through a sieve. The grains of ground azurite were separated by size – the heavier, coarse grounds created a dark blue pigment, while the finer grounds were used to create lighter shades. 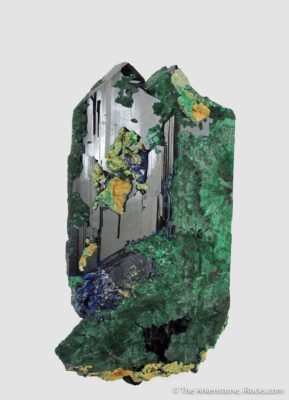 A Tsumeb Mine Azurite caught exactly halfway in the pseudomorphing process! This is the same process that causes the Azurite pigments to fade to green .

No matter the grain, several coats of azurite pigment were required to create a solid blue color – however, the layering of coat after coat of fine azurite fragments eventually formed a crystalline crust with deep blue hue, and a subtle sparkle. The effect was a rich, beautiful, and brilliant blue, with incredible depth – hence it's popularity.

As mentioned above, Azurite, over long periods of time, can alter to greener hues as a natural change based on the copper in the mineral. This change is referred to as a pseudomorph, and the resulting green color is a related copper mineral by the name of Malachite. This change can be seen in mineral specimens, but it can also be seen in the old paintings that used azurite pigments. One of the most notable works of art affected by this Azurite to Malachite change is Raphael's Madonna and Child Enthroned with Saints. The Virgin was often depicted in a blue mantle but time has turned her clothing dark green. (See the paining here)

First noted as a valuable pigment by Pliny the Elder in the first century A.D., azurite pigment was favored by many masters, including Duccio di Buoninsegna, Johannes Vermeer, Hans Holbein The Younger, and Raphael. Its use continued until the 18th century, when it was replaced by the discovery of Prussian Blue, which was more resistant to the greening and fading which tended to occur with azurite's exposure to the elements.

Azurite is a widespread mineral, and significant deposits have been discovered in France, Greece, Germany, Australia, and Mexico, among other locales. The most prized azurites are crystalline specimens, usually originating in Tsumeb, Namibia, or Morocco. Beautiful crystalline azurite specimens have also been found in the U.S., at copper-rich sites located in both Arizona and Utah. 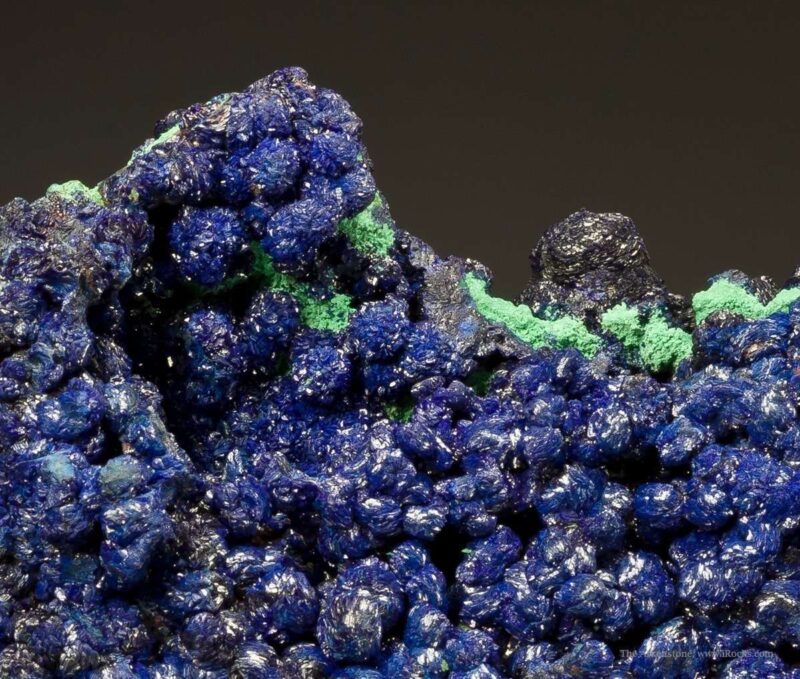 Classic Azurite Specimen from the Famous Bisbee mine in Arizona. Joe Budd Photo.

Azurite's historical connection to artistic endeavors lends additional depth and interest to this stunning blue mineral. Though rarely used as a pigment today, its brilliant color still stands as one of nature's finest, making it a valuable and highly esteemed specimen, which adds distinction to any collection.

To learn more about collecting fine rocks and minerals click here to view our current collection of azurite specimens.