The Benitoite Gem Mine filled one of the largest voids in the mineral world in spectacular fashion. J.F.C. Hessel predicted the ditrigonal dipyramidal class of crystallization in 1830, and when minerals were found in San Benito County in 1907 with this crystal habit, his hypothesis was confirmed. Only a handful of ditrigonal dipyramid minerals have been recognized to this day. This new mineral, named Benitoite, formed in triangular-shaped crystals with an intense sapphire blue-color. 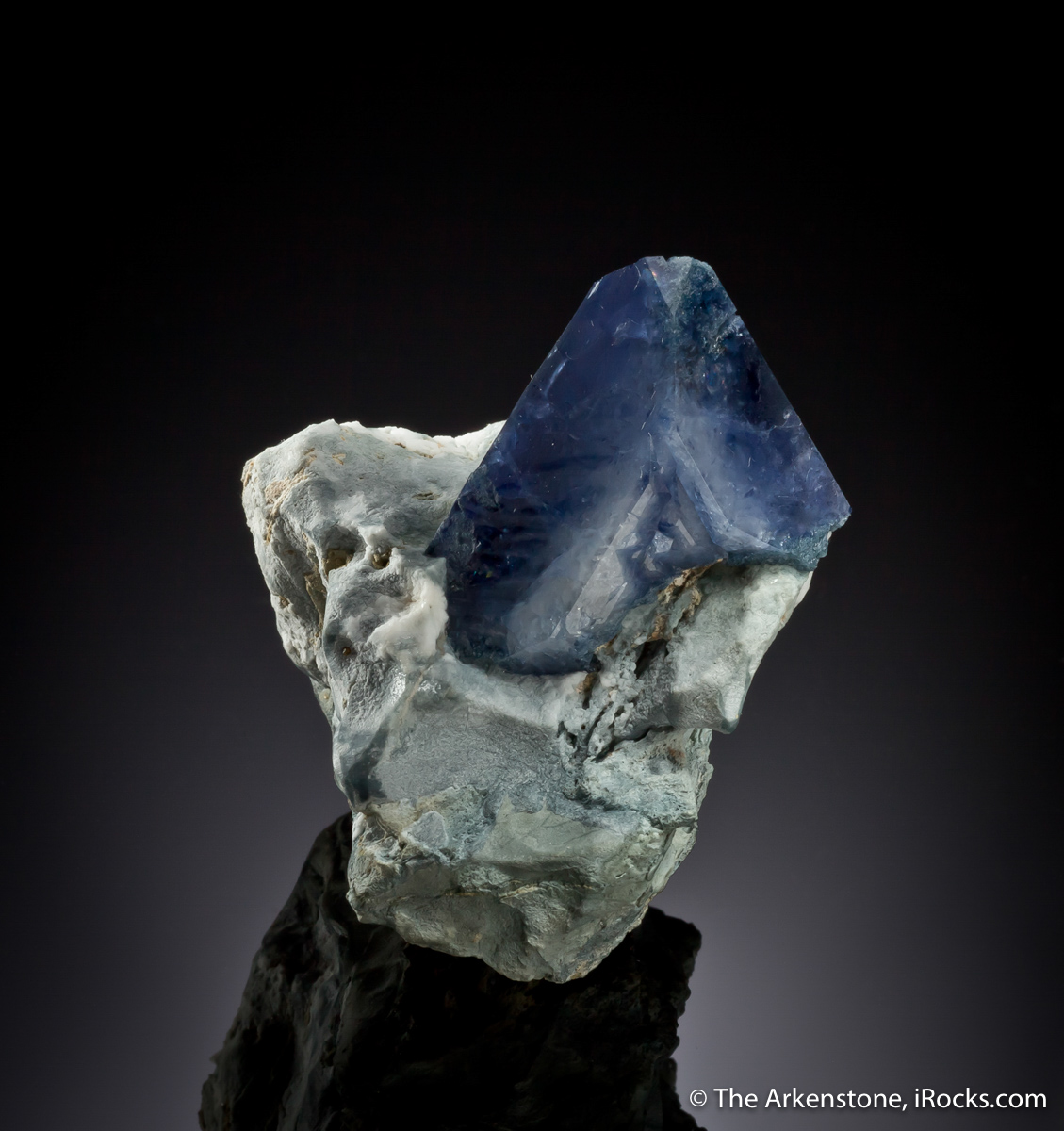 In 1907 oilman R.W. Dallas grubstaked (outfitted with provisions) Jim Couch to explore California’s San Joaquin Valley. Couch brought L.B. Hawkins with him because of his extensive knowledge of minerals. The two men left Coalinga on horseback and rode through the valley for three days, without luck, in search of copper and any other minerals. On the fourth day, while waiting for sun to warm them up from the morning chill, they noticed a tiny tributary of the San Benito River dancing with light similar to reflections from broken glass. Couch went over, and saw “thousands of blue gems” scattered in the river and throughout the hillside that appeared to have weathered out of a snow-white material now known to be natrolite. Natrolite is a sodium-bearing mineral that often exhibits needle-like overgrowths with orthorhombic symmetry. Usually it has the form of a square prism with right angles and a low pyramid. Natrolite will exhibit perfect cleavage parallel to the faces of the prism, a vitreous luster, with occasional silky luster in the needles.

The ‘blue diamonds’ were sent back to R.W. Dallas, who took them to San Francisco to find out what they were. A lapidary in San Francisco described the stones as “too soft to be a sapphire,” and decided they must be a form of spinel, the only other stone that has the blue color. Next, Dallas took the minerals to George Eacret, manager of Shreve and Company, a jewelry store in San Francisco. Eacret found that the stones were doubly refractive, and thus could not be spinel. Eacret then showed the samples to Dr. George Louderback, a geologist at the University of California at Berkeley. Louderback determined that these minerals were a new species, quickly published a preliminary report, allowing him more time to do research until he could publish the final report. Louderback rode out to the site and named the crystals after the river. He also had samples of natrolite with shiny black prismatic crystals that he believed was a new species as well. At first, he named it carlosite, but it was later found to be that they were neptunite, previously found at Narsarsuk, Greenland. Even still, the neptunite that comes from Benitoite Gem Mine are recognized as some of the finest known. The men also found small amounts of copper minerals, djurlite, digenite, and chrysocolla along the seams of natrolite.

The Dallas Mining Company was formed to mine the deposit of this new, yet-to-be-accurately-identified mineral. Thankfully, they kept very detailed records of the operation from 1907 through 1913. Tunneling began in August 1907, only a month after Louderback made his visit to the site, which was only two weeks after he published his preliminary report. A 50-meter tunnel penetrated the hillside and two inclines were dug, each about 16 meters. Several short side-tunnels were also constructed into the primary blue schist zone. Benitoite crystals were found in thin veins of natrolite, and were then chiseled out with hand tools and a punch press, usually used for cutting and shaping metal. The crude process destroyed many crystals, and untold quantities of crystals were lost through the use of high explosives. In later years, it was learned that the natrolite could be dissolved in acid, leaving the gem and crystals totally undamaged. This new exotic mineral is first documented in Shreve and Company catalogs in 1908 as gemstones and set in jewelry. Daily production lasted until 1910, with occasional mining continuing until 1913 when Dallas Mining Company declared bankruptcy and auction off its equipment. The next twenty years of the Benitoite Gem Mine are virtually unknown as the diary of the Dallas Mining Company came to a close. 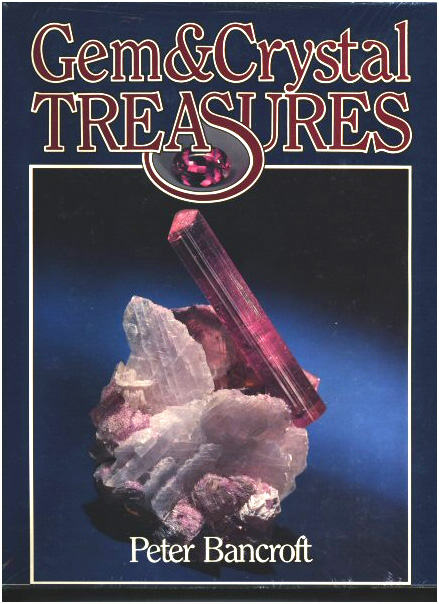 Edward Swoboda and Peter Bancroft (author of Gem & Crystal Treasures) became mineral collectors at a young age. As boys they had read about the Benitoite Gem Mine, and in 1938 they set out to go explore the mine for their own crystals. They were dropped off in Coalinga, and set out on foot, and made the 22-mile (36km) hike to the mine. There was a cabin leftover from the operation that was still standing, and upon inspection was determined to still be weather tight, and have a working wood stove. On their first night there they were awoken to rustling and rattling, to discover four rattlesnakes, three falling to .22 caliber rifles. Swoboda and Bancroft found the mine walls still crossed with natrolite veins, but they were devoid of gems. They did find, however, a decomposed section of the mine that was rich in weathered-out benitoite gems that allowed them to begin collecting. They sorted the crystals by grade according to the estimated flawless weight each would produce. They did this for two weeks when their food ran out, then headed out with their packs loaded to about 45 kilograms. When they returned, they loosened the matrix from the gems with hydrochloric acid, and measure several fine gems with flawless deep blues that weighed in between 4.25 and 4.45 carats. Swoboda and Bancroft made a total of six trips to the mine. In 1947 a forest fire swept through the area, destroying the cabin.

The forest fire did not mean the end of the Benitoite Gem Mine, however, Julius Gisler and his son also worked the tunnels in the mid-1940s. They found spectacular benitoite crystals up to 2.5 cm in length that are now housed in museums. R.W. Dallas managed to retain control of the mine, and in 1952 Clarence Cole leased the mine. He brought in a small amount of heavy equipment and began hauling material offsite to Oakland to work through it. Cole hauled an estimated 9 tons of material that proved to contain very little valuable material. Cole found a handful of stones weighing over 3 carats, and even claim that his cutter stole a 5.18-carat stone. Cole had control of the mine through 1967, but the last five years were inactive, and his total time with the mine proved to be unsuccessful.

In 1967 Elvis Gray and William Forrest, leased the mine from Dallas’s daughter and systematically worked the area. The process was very rudimentary at first, and was a weekend operation throughout. Gray and Forrest started with hand tools, working over the surface, and then eventually moving up to drilling and blasting. They mined every weekend, leaving Fresno at 5:00am and working until 5:00pm on Sunday so they were back work on Monday. In 1970 they discovered an enormous block of veined blue schist that produced some of the finest neptunite crystals ever found. They had superb doubly terminated crystals exceeding 5cm in length on pure white natrolite matrices. Another block was found that had freestanding benitoite and neptunite crystals in association with albite crystals that were not associated with the natrolite vein. Within the block of blue schist they found outstanding tiny crystals of orange joaquinite.

Later on, crystals of a new mineral, snow-white jonesite, were discovered in the acid baths used to recover benitoite crystals. Three other rare crystals were found at the Benitoite Gem Mine, biotite, fresnoite, and banalsite. The operation was proving to be unsuccessful, and in 1972 they focused solely on tailing. Water was pumped up the hill, and the tailings were separated with everything greater than 2.5 centimeters being washed so they could be hand sorted for minerals. The entire process was difficult because the soil was basically clay, but the workers became proficient and were able to spot knobs of natrolite that coated benitoite and neptunite. The smaller material was sorted in a gravity jig where higher density benitoite could be sorted out. The natrolite coating was actually able to protect the more valuable minerals when the tailings were blasted and transported, and then all that was needed to remove it was hydrochloric acid. In 1984 Gray and Forrest bought the mine from the Dallas family, and found a new vein down the hill from the tailings pile. Many fine specimens were recovered from this vein, but the majority of the production from this time was from the tailings. Numerous stones larger than 4 carats were found, including a 15.42-carat flawless faceted stone now in the Mike Scott collection that is the largest clean stone ever found. Gray and Forrest operated the mine as a fun adventure despite being contacted by several companies interested in acquiring the property. 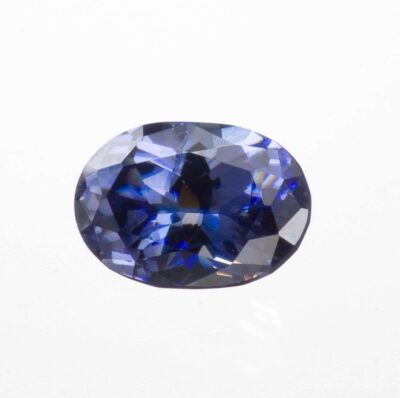 Lustrous cut Benitoite gemstone from the Dallas Gem Mine.

In the late 1990s, new technology was available and Azco Mining, Inc. tested the property but did not purchase the mine. Bryan Lees’ Benitoite Mining Inc. (BMI) did come through and purchase the mine in November of 2000. BMI used Gray and Forrest’s old equipment, feeding 2,000 cubic meters through the sorters. In 2002 they enlarged the operating plant, installing a specimen-sorting belt, so the gravity jig operator was no longer responsible for watching specimens and making sure the flow of material was proceeding smoothly. They also went through the tailings pile, and were able to recover an astonishing amount of small gem rough. BMI embarked on a strip-mining operation of the area but was left disappointed as the blocks they cut out proved to be barren on benitoite. They processed approximately 25,000 cubic meters of material before closing down for good in 2005.

The Benitoite Gem mine is also rooted in jewelry lore. In 1972 William McDonald, a Fresno jeweler, design an elaborate necklace fashioned in platinum, gold, and diamonds, with 66 stones of benitoite. Elvis Gray spent four years cutting 60 stones for the necklace, including the feature stone; set as a pendant, it was a flawless deep blue benitoite of 6.53 carats. The necklace was sold and shipped Zurich, where a Swiss security official stole it. The necklace was recovered, but the massive pendant has never been found.

The Benitoite Gem Mine is still one of the most unique mines to this day. Benitoite occurrences around the world are basically non-existent, aside from minor occurrences in Japan and Arkansas. Five miles to the northwest of the mine is the Mina Numero Uno, which has produced pink benitoite, and that is it for localities. The California Federation of Mineralogical Societies pushed for benitoite to be named the California State Gemstone in 1984, recognizing the significance of the mineral.

"In 2005 the mine was sold to Dave & John Luke Schreiner. That year a single piece of rough was found that was 34 carats which was cut by Ben Kho which produced 4 stones, the largest being a 8.06 carat flawless oval. It was opened for the first time in its history as a public fee collecting site until the closure by the BLM of the surrounding 75,000 of the Clear Creek Management Area. In 2008 following the closure, the owners built a fee dig at their property outside Coalinga where material is hauled down by dump trucks for fee diggers to try and find their own treasure. Still to this day, facet grade crystals and specimen material is still being found in the old Mine Dumps." 08-23-2019

Written by Lauren Megaw for The Arkenstone, iRocks.com