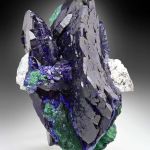 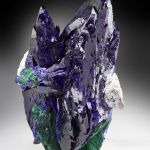 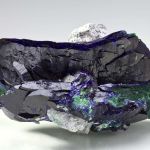 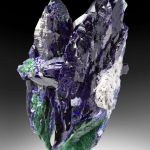 Milpillas, to me, is the wonder-locality of the first part of this century. It is now producing, briefly, azurite of such a quality as to rival and surpass Tsumeb. Nothing like these has been seen in decades, and even then, Milpillas has a style and intense blue color in its large crystals that makes it stand out. With the mine scheduled to burn through the oxide zone in which these occur within the next year, I also believe that a great Milpillas azurite is a good investment now. The world just doesn't make azurites like this, often, from anywhere. This bonanza will not last... cannot, according to the geology there. And so, I have hoarded a few great specimens while waiting to see how the mine winds down. This piece, with its gently curving crystals to 4 inches, has among the largest fine crystals found to date (to my knowledge, and I have followed the finds carefully). It probably came out in about 2009. The contrast with the malachite underneath adds color to the bottom horizon. The crystals are not quite, but nearly pristine. They are dramatic, and the piece can be seen from meters away. Moreover, it looks good either horizontally or vertically. Price on Request. Joe Budd photos 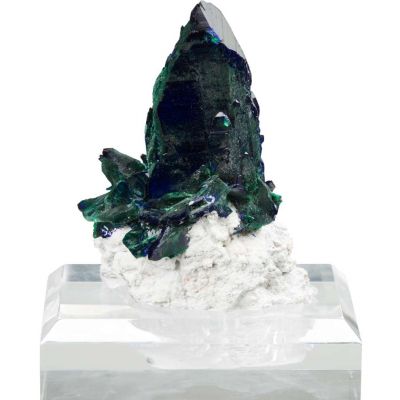