Anatase was named in 1801 and is one of five naturally occurring forms of titanium dioxide. It is found all over the world, on all continents, (even Antarctica!), but Norway hadn’t been known as a producer of showy, display specimens. That all changed in the 1970s when quartz crystals sprinkled with large (5-10mm) anatase crystals from “Hardangervidda, Norway” hit the European market, and specimens soon started reaching North American markets as well. This was the first major “alpine-type” deposit found in Norway and was of great interest to geologists as well as mineral collectors. The story about the discovery and the manner in which the locality was exploited raised a number of interesting points about Norwegian law concerning mineral collecting during that time. Today, the deposit is essentially exhausted and the locality is a national park. 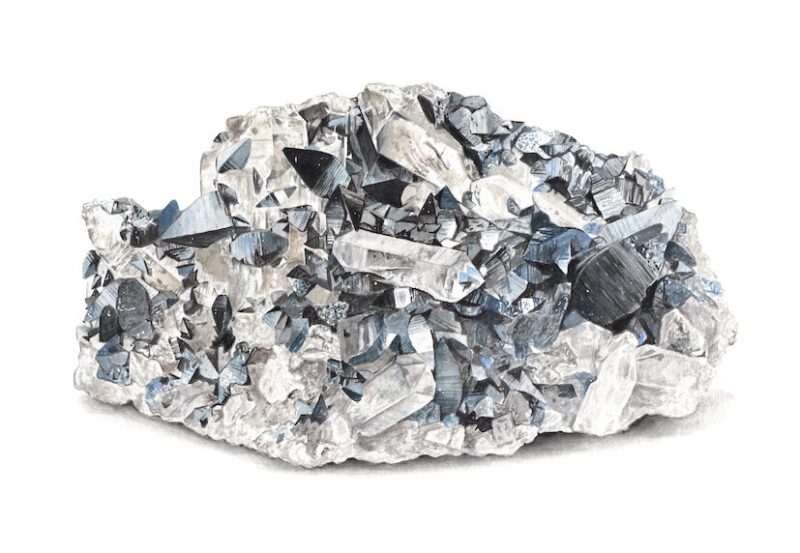 Hardangervidda is a mountain plateau in central southern Norway, covering parts of the counties of Buskerud, Hordaland and Telemark. It is the largest plateau of its kind in Europe, with a cold year-round alpine climate, and one of Norway’s largest glaciers, Hardangerjøkulen, is situated here. Much of the plateau is protected as part of Hardangervidda National Park. Much of the Hardangervidda‘s geology is extremely ancient. The rolling hills of the Hardangervidda are the remnants of mountains that were worn down by the action of glaciers during the Ice Ages. The bedrock is mainly of Precambrian and Cambro-Silurian origin. 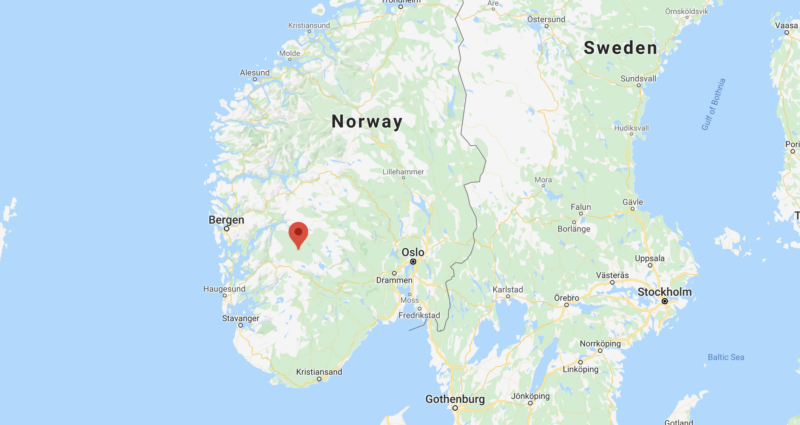 Hardangervidda, in the southern part of Norway

Hardangervidda, especially the western part, also called Hardangervidda West in recent mineralogical literature, which belongs to the Hordaland County, is famous for producing great specimens of anatase and quartz. The localities that have produced most specimens are Matskorhæ (now protected) and Dyrfonni. Clusters of transparent quartz crystals dusted with blue-black bipyramidal, sharp 5-10 mm large anatase crystals were typical specimens found at this site, especially in the 1970s. The locality is today considered exploited. It is located near Mt. Matskorhæ, east of the Ringedalsvatnet Lake, outside the border of the Hardangervidda National Park. It is also located within the Ullensvang Statsalmenning (statsalmenning = a government forest and mountain common land with certain laws and rules for the use of the land). The area covered by the Ullensvang statsalmenning is divided by both Ullensvang and Odda municipalities, and Matskorhæ is located within the Odda municipality. It was nicknamed “Grisebingen” (the pig pen) by Norwegian collectors, due to the dirty working conditions at the locality. The deposit is located 1300 meters high in elevation on the western side of Hardangervidda and is inaccessible for 10-11 months of the year due to deep snow.

Before development, the surface expression of the deposit was a large cavity (~1 cubic meter) filled with quartz crystals, up to 10 cm long, with scattered anatase crystals above a large talus slope littered with quartz crystals. The cavity had been exposed 6000-8000 years ago during the last retreat of the glaciers. An old reindeer-hunting lookout was found on a cliff above the deposit so this site was likely known from antiquity; reindeer are still found here to this day! Quartz crystals from here may well have been used as tools by Stone Age hunters.

Anatase – Hardangervidda West, Odda, Ullensvang, Vestland, Norway ?DM for pricing or email info@iRocks.com This sharp, well-crystallized anatase crystal is from one of the most prized localities for the species, the Hardangervidda finds. At 2.3cm, this thumbnail specimen has just a hint of quartz, a common association from here. The termination is super sharp on this 6.75g crystal!

In modern times, the locality was first visited by collectors in 1966, when the Tyssefallene A/S power company began building dams in the area and several workers learned about the hole from local residents and started removing minerals to decorate their homes with. Norwegian concession laws require that any mineral finds on a concession property must be reported to state authorities, such as the Geological Survey or the Museum. A person falsely presenting themselves as a professional geologist from a Norwegian university visited the dam site and asked if any minerals had been found, was led by the company to the locality, due to Norwegian concession laws. This “professional geologist” and his associates began mining operations in 1969 under the false pretense of “scientific investigation” of the Hardangervidda deposit. From 1969 to 1974, the construction workers and the “geologist” and associates extracted large quantities of material. There was a market for single quartz crystals and small clusters with anatase so, unfortunately, little or no attempt was made to remove large, complete clusters. The majority of work done over this 5 year period was done with an L-shaped steel bar, with which crystals were broken from the matrix and dragged out of the hole. 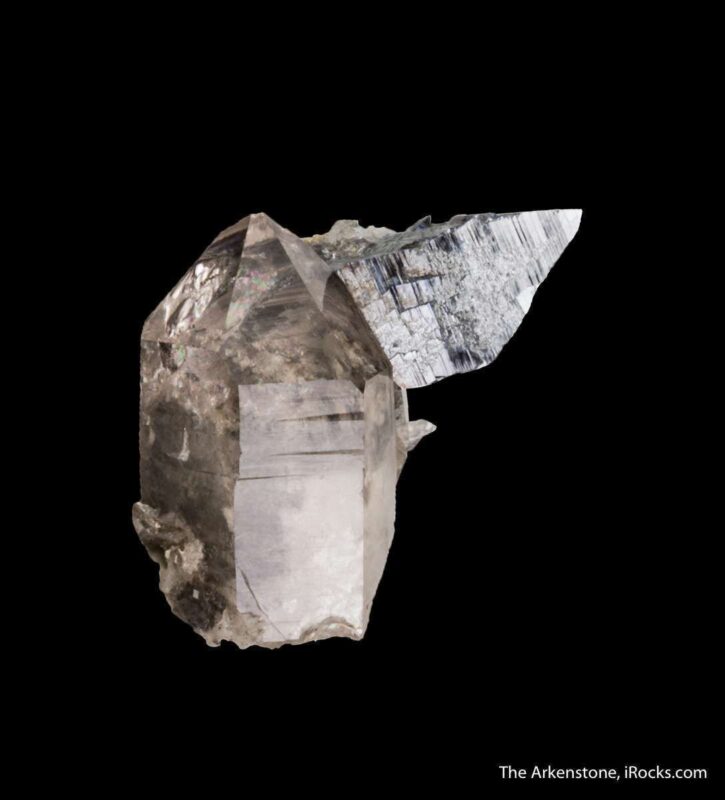 In 1974, a group of amateur mineralogists visited the deposit and succeeded in taking out several remarkable clusters. They reported the deposit to the Mineralogisk-Geologisk Museum, donated their finds, and suggested the deposit be put under special protection to stop the vandalism being done by the commercial operators. The Museum contacted the power company, the State Forestry Authority, and the police to protect the area. In the end, the power company property line was posted, the company warden and local sheriff were empowered to turn away unauthorized people, and the cable lift, which had provided easy access to the deposit, was dismantled since construction on the dam had been completed earlier. There were expeditions by the Museum and amateur mineralogists in 1975 and 1976, which were focused on mapping, sampling, and exploratory digging. They concluded that very little significant material could be removed from the deposit without extensive extraction work but the deposit and dump are geologically interesting and would remain under legal protection.

The deposit occurs in the phyllites of the Holmasjø Formation. The phyllites are part of a sheet that was thrust over the Precambrian granite basement during the Caledonian orogenic event. On top of the phyllites lies another thrust sheet of Precambrian granites and gneisses. Foliation is dipped at a low angle and is cut with subhorizantal thrust zones parallel to the major thrust faults. Some minor faults are filled with finely crushed rock but others are brecciated with large blocks of phyllite. The breccia zones are filled with milky quartz lenses and full of druzy cavities. After the thrusting, the phyllites were weakly folded and created NE-trending en échelon gash veins, which were filled with druzy quartz. In those veins, the quartz was typically rutilated and anatase was often found where open space had formed. The original deposit occurred at the end of one such vein that was filling a minor thrust plane. Minor fault movement provided access to large open areas where mineralized solutions were able to deposit quartz and TiO2 minerals. The movement continued after crystallization of quartz and anatase; many anatase covered quartz were broken off and regrown so doubly terminated “floaters” are common.

The weak breccia zone where anatase was concentrated was easily excavated with hand tools. The tunnel follows the edge of the quartz lens and the greatest concentration of anatase was found in a zone where the gash veins were visible in the roof and floor of the tunnel; the abundance and quality of the anatase quickly and sharply dropped off in all directions from that zone. The quartz crystals come off the phyllite matrix easily but great care was needed to extract large groups. That is why many of the anatase on quartz crystals you see today are single points or smaller clusters. Very few large clusters were unearthed intact from Hardangervidda.

We’d like to extend a special thanks to friend Alex Venzke for authoring this article.