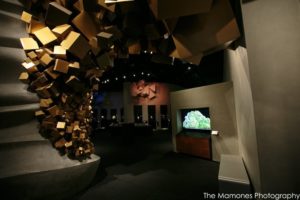 Entry to the Lyda Hill Gems and Minerals Hall, showing a large crowd on one of the donor preview nights, as people saw beautiful minerals on display. Oversized models of crystal structures hang from the ceiling to convey the symmetry of nature as seen in minerals.

The United States are home to an impressive array of natural history museums – each with their own unique collection of rock and mineral specimens. Many specialize or focus on one particular field or area of mineralogy or geology – but we’ve selected a few with exhibits which display beautiful and interesting collections, with broad focus and exemplary quality.

Take a moment to read more about these famous rock and mineral museums – and you might find yourself planning an exploratory adventure, to view their amazing collections in person!

The Mineralogical & Geological Museum at Harvard University (MGMH) focuses on the development and preservation of world-class collections of rock and mineral specimens. Their outstanding array of gems, minerals, rocks, ores, and meteorites are made available for research, education, and public display.

MGMH’s collection of rock and mineral specimens is a rich resource of information and materials, boasting more than 100,000 samples from a wide range of localities, worldwide – and representing more than 2,250 different species. More than 3,000 of these specimens are available for viewing in the public gallery. For more information on visiting the museum, click here.

The Los Angeles Natural History Museum’s Gem and Mineral Hall is comprised of two large galleries, which showcase one of the finest exhibits in the world. The museum’s complete collection includes more than 150,000 rock and mineral specimens – of which only a fraction are on display in the Gem and Mineral Hall. Still, the exhibit displays an extensive collection of California specimens, as well as an impressive array of gorgeous gems from around the world.

The museum also hosts a “touching gallery” which encourages visitors to explore and interact with special displays of rock and mineral specimens, including an interesting selection of gems and meteorites. One of these, a slab of beautiful gem-quality jadeite which weighs several hundred pounds, is one of the most valuable stones in the exhibit. For information on planning your visit, click here.

The American Museum of Natural History’s Morgan Memorial Hall of Gems features a rotating display of of uncut and polished precious and ornamental stones – as well as rare and valuable organic materials such as coral and amber. The items included in the exhibit are drawn from the museum’s extensive collection of more than 100,000 rock and mineral specimens. Named after famed financier JP Morgan (after whom Morganite was named by George Kunz), the mineral hall has been open since the mid-1800s.

The hall is organized by mineral group, and features an array of diamonds, rubies, sapphires, beryls, opal, and many other rare, valuable, and unusual gems, synthetic gemstones, and precious metals. There is even a display which features decorative items, finished jewelry, and other precious items collected over more than three millennia. This exhibit is also home to the Star of India – a flawless sapphire which weighs in at over 550 carats – as well as a man-made recreation of an impressive crystal-filled pegmatite which was discovered in the San Diego mountains. For more information on visitation, click here.

The National Museum of Natural History (NMNH) is just one part of the Smithsonian Institution, the world’s preeminent museum and research complex. Opened in 1910, the museum was constructed with the sole purpose of housing the Smithsonian’s natural collections and research facilities, and was one of the first buildings to be completed. The NMNH collection consists of approximately 350,000 rock and mineral specimens, including approximately 10,000 gems – making it one of the largest collections in the world. 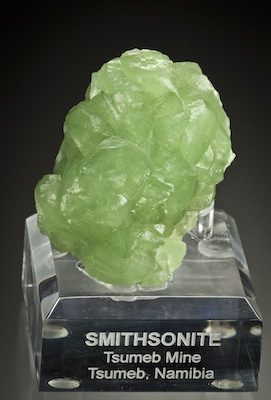 Named after James Smithson, a noted mineralogist in the late 1700s, the Smithsonian Institution is one of the crown jewels of the world’s mineral museums… no pun intended. Eventually, Smithsonite would be named after him in the 1800s.

One notable specimen in the collection is the spectacular Hope Diamond, a deep-blue gem of startling clarity which weighs in at more than 45 carats – and has been rumored to carry a curse. To plan your visit, click here.

The Yale Peabody Museum actually houses the oldest meteorite collection in the United States – established in 1807, when pieces from the Weston, Connecticut fall were gathered for study and display. Today’s collection showcases over 400 meteorite specimens, with a special focus on American meteorites of the 19th century. The opening of the new David Friend Hall of Gems and Minerals is also planned for 2016, and will coincide with Peabody’s 150th anniversary. For helpful info on planning your visit, click here. 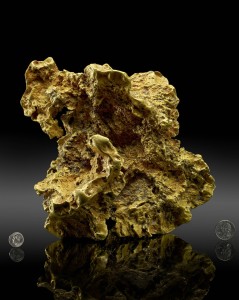 The “Golden Age” of mineral collecting. Ausrox Gold Nugget, the third largest nugget in private hands at over 23kg, 51 lbs. Photo courtesy of the Houston Museum of Natural Science.

The Houston Museum of Natural Science allows visitors to explore more than 450 of the world’s rarest and most beautiful crystallized mineral specimens. HMNS’s permanent collection, which is on display in the Cullen Hall of Gems and Minerals, showcases a dazzling array of treasures, in standalone viewing cases illuminated by a cutting-edge fiber optic system, designed to provide optimum conditions for 360-degree examination. (Click here for detailed information regarding visitation.)

The Cullen Hall is also home to the newly discovered Ausrox Gold Nugget – one of the world’s largest gold specimens. Discovered in 2010 by three Australian miners, who were prospecting with the help of a handheld metal detector, the Ausrox weighs in at over 748 troy ounces!

With this purpose in mind, the Lyda Hill Gems and Minerals Hall was designed for interaction – maintaining a heavy emphasis on educational exhibits which encourage exploration and experimentation. To learn more about planning your family excursion to the Perot Museum, click here.

The Dallas Mineral Collecting Symposium has also enjoyed a strong relationship with the Perot Museum, and many “mineral legends” visiting for the symposium make stops to visit the Perot and note their own special reviews of their time.

Interested in locating more museums which showcase rock and mineral specimens? The Society of Mineral Museum Professionals has compiled a list of locations throughout the world. Click the link to view more.