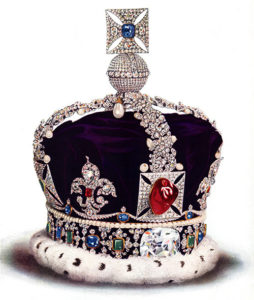 The ruby is a unique precious stone that has adorned a massive following throughout human history. Its deep red colors have made it the favorite of royalty across world cultures from India to England. Many cultures have also created dramatic legends around favorite, famous rubies. The Black Prince’s Ruby was a famous ruby with a tragic past, but a surprising discovery changed its image forever.

The Black Prince’s Ruby Is Not a Ruby

The Black Prince’s Ruby has had a long history as a royal gemstone whose incredible size and blood-red color made it the crowning jewel to the Imperial State Crown of the United Kingdom. Weighing in at 170 carats and at about 2 inches long, the Black Prince’s Ruby was long thought to be one of the largest rubies in the world. However, a ruby gemstone of this size would prove too good to be true.

The majority of rough ruby crystals grow in the shape of an elongated carrot and have their pleochroism flowing towards its pointed ends.[1] Pleochroism describes a gradient effect where different colors follow an opposite direction from the crystal. This makes cut ruby gemstones larger than a carat incredibly rare, because the naturally elongated shape of the ruby makes it vulnerable to a low weight retention rate.[2]

While the Black Prince’s Ruby is an impressive specimen in its own right, it is not a ruby. In the 16th century, jewelers found the Black Prince’s Ruby to be a spinel, a mineral that is well known today as “the great imposter” for its deceitful likeness to a ruby.[3] Although they share the same color with the ruby, the spinel has a completely different chemical composition and crystal structure.

The Curse of the Sultan

The legends behind the Black Prince’s Ruby starts with an act of deceit. Prior to being the crowning jewel in the Imperial State Crown of the United Kingdom, the Black Prince’s Ruby made its first known appearance in the 14th century as the gemstone of Abu Said, the last Sultan of Granada.[4] In 1362, Granada was losing territory to King Pedro the Cruel of the Christian Kingdom of Castile through a series of battles. To find peace, the Sultan arranged a peace meeting with King Pedro in Castile.[5]

On arrival to the Castilian lands, King Pedro killed Sultan Abu and all of his accompanying servants. King Pedro had no intention of settling for peace, and some accounts describe the king as the one who killed the Sultan himself. The ruby was then confiscated from the body of the Sultan. This is the first step in a long history of misfortune surrounding the ruby throughout the majority of the Middle Ages.

Cursed Through the Middle Ages

Soon after killing Sultan Abu, King Pedro found himself warring with his brother, Henry of Trastamara for the throne of Castile. To aid in battle, King Pedro enlisted the help of Edward the Black Prince of England. After a series of battles, Henry of Trastamara was kept at bay, successfully preserving the throne of King Pedro. For his service, the ruby was given to Edward the Black Prince.

Upon receiving the ruby, Edward the Black Prince returned to England. However, King Pedro’s victory wouldn’t last long as he’d engage in more battles with his brother, resulting in his bankruptcy and death just 3 years later.[6] Edward the Black Prince would also die from a slow disease before he could inherit the English throne, leaving the ruby to his son, Richard II.[7]

Richard II would eventually become King, but he was murdered at the age of 21 by Henry IV Bolinbroke, starting the line of Lancastrian Kings.[8] Shortly after taking the throne, King Henry IV Bolinbroke would die from a slow illness, leaving his son Henry V to inherit the throne and the Black Prince’s Ruby.

This series of kings dying from mysterious illnesses or misfortune in battle would continue through several lineages until the ruby made its way into the hands of the Tudors.

Passed from the Tudors to the Stuarts

The Black Prince’s Ruby was inherited by the Tudors in the 16th century, entering a relatively calm period for the gemstone. Queen Elizabeth I gifted the ruby to Queen Mary of Scots who would pass it down to King James I when the Stuarts took the English throne in 1603. However, the years that followed the exchange saw another wave of misfortune as King James’s son, Charles I, was executed during the Civil War and the Crown Jewels were sold off.

When the Black Prince’s Ruby was being appraised, a jeweler discovered that the stone was not a ruby but a spinel. When the monarchy was restored by Charles II in 1660, the jewel sold to the crown for 15 pounds and was refashioned as the crowning jewel of the Imperial State Crown.[9] The throne was then inherited by Charles’s brother, James II, who was exiled just 3 years after his coronation.

Today, the Black Prince’s Ruby is now on display in the Tower of London with the rest of the crowning jewels. There have been a few notable incidents since, such as when King James II lost the throne. All in all, the long history of misfortune following the stone has made the Black Prince’s Ruby one of the most infamous jewels in English history.

Looking for rare rubies? Then explore our expansive collection of rare rocks and minerals! We’ve recently updated our galleries with many impressive specimens from around the world. You can find our latest collections here.