To the untrained eye, a coin has two-sides and shimmers in the right light. To an avid collector, a coin is worth more than its printed monetary value and face. Each coin has a unique craftsmanship that details the tools and symbols of their time. The weight and materials used capture a moment in history and the journeys it took to create it.

The excitement that comes from studying the beauty and history of a rare coin is the same felt by rockhounds when they add a rare mineral to their collection. Rare coins and minerals have more in common than one would think, from how a sample is appraised to their collection trends. Both inspire dedicated communities to their craft.

More Than a Shine

Like a rare mineral, the rare and more sought after the coin the greater its potential value. Where a coin and mineral differ is in their creation. Minerals are created naturally within the earth over a span of thousands to millions of years. Coins are minted by people using minerals, which places greater emphasis on the coin’s locality and year of circulation.

When judging a coin, the value is derived from its historical significance and strike. Some important factors include: 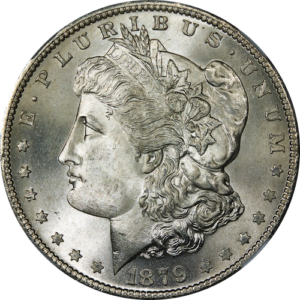 For example, a highly popular coin amongst coin collectors is the 1891 Morgan Dollar. The coin was minted between 1878 through 1904 as the first standardized silver dollar, ending the free coining of silver. Coins minted in 1891 were some of the last to be minted under the Sherman Silver Purchase Act of 1890, as silver was soon redistributed to mint dimes, quarters, and half dollars.[1]

1891 Morgan Dollars of the same mintmark, year, and overall condition may appear to have similar values. However, coins with clearer mintmarks, specifically the Carson City “CC” mint, are worth more than those with shallower strikes.[2] This is because the 1891 Morgan Dollars were produced by four minters with different rarities.

Variations of the factors used to judge coins are also used in judging the quality of rare minerals. Some of the physiological features of a mineral that are taken into consideration are: 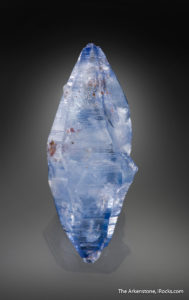 Natural sapphires like this one are judged on criteria like crystal shape, color, and the rarity of the location. Joe Budd Photo.

In addition to physiological features, there are also major differences between species of minerals in terms of their chemical makeup. Rare minerals like sapphires and opals are chemically unique from one another. Sapphires are a variety of corundum and, depending on its concentration of impurities, can take on multiple colors. Opals are amorphous as they don’t take on a purely crystal structure and can shine multiple colors at once in what is called the “play-of-color”.

Like a coin, the locality or where the mineral was formed plays a major role in its value. Minerals are created through natural processes within the earth over a span of thousands to millions of years. With earth hosting a variety of climates, specimens from certain parts of the world will slight variations in their qualities.

For instance, 90% of the world’s opals are mined in Australia.[3] Another producer of opals is Ethiopia. Although both countries produce the same silica-based opal, Ethiopian opals are found to contain half the amount of water of Australian opals. [4]

To the avid coin collector and mineral enthusiast, there are few things better than learning more about the samples in their collection. In many ways, collecting coins and rare minerals share the same enthusiasm for history, beauty, and the hunt for their next piece.

Explore our expansive collection of rare rocks and minerals! We’ve recently updated our galleries with many impressive specimens from around the world. You can find our latest collections here.

[3] “The History of Opal”. Opals Dow Under. http://www.opalsdownunder.com.au/learn-about-opals/intermediate/history-opal