A new adorable first for us – and I’m hoping these two lovebirds don’t mind if I share their story.

Annalee and Nick first discovered The Arkenstone around a year ago. Annalee, an account exec for a luxury magazine in Dallas, had visited the showroom several times to meet with us for advertising purposes, and eventually she brought her boyfriend, a petroleum engineer, to marvel at our sparkly minerals. 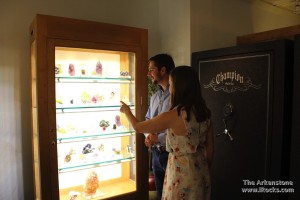 The first time he came in, he was hooked… And boy is she stubborn – Annalee refused to walk out of the showroom without a crystal to remember their visit and start their own mineral collection! Nick gave in and Annalee walked out with an adorable little azurite thumbnail. Since then, the two have started a habit of gifting minerals for significant occasions; anniversaries, birthdays… and over time their collecting taste has matured.

When Nick came to us asking if we would let him propose to Annalee in the gallery, it seemed like a perfect fit. Annalee was under the impression they were shopping for a present for Nick to give his mom for a Mother’s Day present, so with a hidden GoPro in place taking video and an employee acting as paparazzi under the guise of getting photos of shoppers in the gallery, the two began wandering around the cases. It wasn’t until they reached the last set of cases that Nick asked Annalee if she saw a rock she liked, where a beautiful diamond ring was placed on a quartz crystal. Once she realized what was happening, he pulled out the ring, got down on one knee, and the rest is, well, history waiting to be written.