This is a special tanzanite crystal, even among others we have seen, for its unique quality and style from an early 2000s pocket that is now legendary. We think this pocket came in 2003-4 and the style remains distinct to this day for color, clarity and gemminess within, and the sleep, modern, architecture of the crystals themselves without undue distracting striations, rounding, or defects. The gemminess and clarity is special, and in fact this is prime cutting rough material. They are now only found in top collections such as the MIM Museum. Tanzanite is one of those gemstones termed a "generational stone" because the supply and the mine is limited by access and location, and will eventually run out (probably in our lifetimes). They are already digging below 1 kilometer in depth. That being said, there were a huge number of crystals mined over the last 30 years, and surely more will come - and yet, within that production, some pockets and styles stand out above others. Also, as the government now controls production and optimizes production for gem rough, and controls sale of rough crystals to maximize the local share of the value and revenue for the gem trade (and taxes on such trade) within Tanzania, it is harder and harder to get new crystals saved from cutters and exported even if they are found. This crystal is a perfectly sized miniature from this legendary pocket, and in person simply is better (more gemmy, more appealing in shape and sharpness and symmetry) than most others of similar size. It is almost impossible to find an example of this find, let alone a good one. Two dealers (the former partnership of Trinchillo and Budil) brought out the pocket, back in the day - they are photographed everywhere now (usually under the name of Daniel Trinchillo, who sold them to his customers). This miniature, however, has not been seen since as it went to their close friend and collecting buddy, and has been in his collection and off the market for nearly 15 years. It is a rare treasure, when something of this caliber turns up for sale. Price on Request. 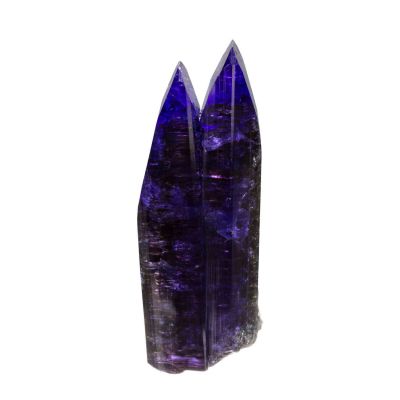