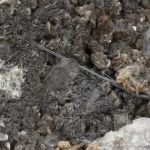 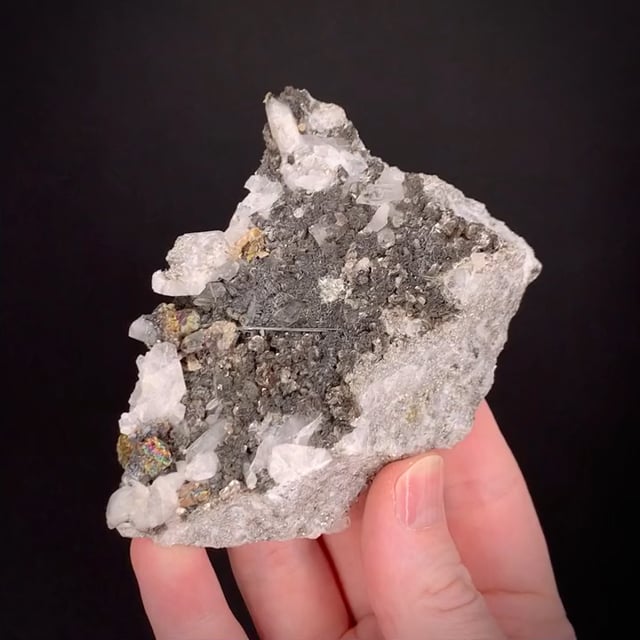 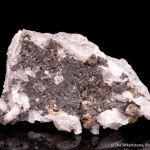 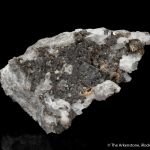 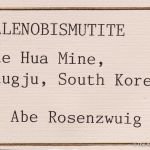 Galenobismutite is a rare lead-bismuth sulfide and this is a large crystal on matrix for the species from an impossible-to-obtain Korean location prior to the War. The Taehwa Mine in Korea is located in a tungsten deposit noted for producing fantastic Scheelite specimens but most us wouldn't be aware that the mine had some sulfides in association (logical that they are there, but rarely saved or exported). The display side of this cabinet piece is festooned with 2.0 to 4.0 mm, hexagonal Muscovite crystals and there are a few euhedral Quartz crystals on one end and some remnant Quartz around the periphery. Just right of center on the piece is a long, acicular crystal of bright, metallic gray Galenobismutite that grew right across the silvery green Muscovite crystals, and is front and center on the specimen. This single Galenobismutite crystal is 2.3 cm long, which is quite large for this rare species. Galenobismutite is also one of those great minerals named after its composition, so not only is the name straightforward but you have an idea of its chemistry as well. A great specimen for the species and from an unexpected locality! Ex. Abe Rosenzweig collection. One would expect this to have been mined in the 1930s-1950s, which goes well with the date that Abe collected and his expertise in sourcing Asian specimens. (see: https://mineralogicalrecord.com/labels.asp?colid=1150)