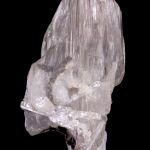 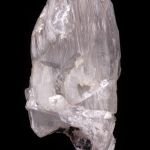 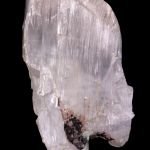 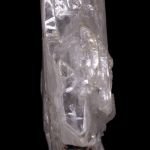 Leiteite is a very rare zinc arsenate mineral species named in 1977 from a single aberrant specimen found at Tsumeb, and then found sparsely in a few more pockets in the germanium levels of the final and deepest part of the mine. In all the previous years at Tsumeb, none had been found until the miners went down to a third oxidation zone and encountered a bizarrely germanium-rich area from which new species came in profusion; Ludlockite and Leiteite among the most well known. Most of the examples of these species are fibrous. This specimen, however, shows robust crystal faces, and real crystal form...and it's very large for the species! It also has a beautiful pale lavender tint to it and is extremely translucent to transparent and attractive, whereas most Leiteite is opaque, fibrous, and looks more like white asbestos than a mineral specimen. This piece also displays a delightful combination of both silky and pearly lusters in any orientation! This is a superb example of the species and an important specimen of good size for a Leiteite crystal. Most importantly, for the size it is quite museum-worthy displayable and not ugly.