Apophyllite in a quality and style not often seen before, for this combination in this size, with an 8 cm gem point standing straight up from contrasting matrix! A single remarkable pocket produced these sharp, standing gem crystals of exceedingly gemmy mint-green apophyllite perched on clouds of pink stilbite, right before Tucson of 2017. While we have seen similar in the past, in smaller size, I cannot recall seeing such a monster of this quality. I bought all I could, and sent them to the lab for cleaning and preparation. The few I did not get to fast enough, had already sold into major collections before even being cleaned and prepared, just as mine-run. Under a dozen were as remarkable as this piece for aesthetics, still fewer of this size, and all of these stand to me among the best examples we have yet seen of the species from this deposit. It is three-dimensional, and complete all around, repaired (as you would expect for this material) but with no damage and no sign of the repair as well. Although common in principle, Indian minerals at the xenith of their finds really stand out as among some of the best the world has, and the prices on the finest Indian minerals are still an order of magnitude less than common minerals species from elsewhere, in part due to overproduction and in part due to collector attitudes that "they will find more." They do, every year - but different styles. Not like this! Photo by Joe Budd. Comes with a custom lucite base. 360 Video available at https://goo.gl/BFPkYs 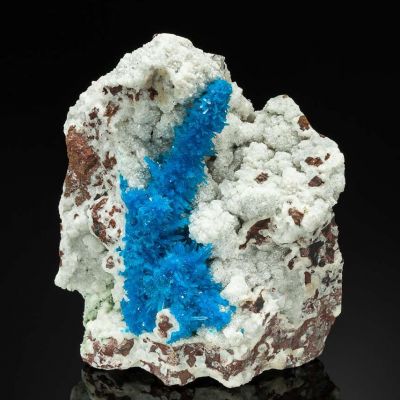