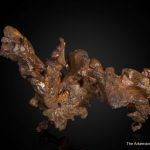 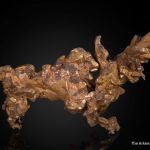 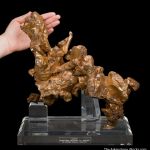 This important copper specimen is one of the single most significant coppers to come to market in my life and is from the mid-1800s heyday of mining in the Upper Peninsula. It has been preserved without damage or cleaning (which would ruin the ancient and natural patina) for over 100 years, probably closer to 150 years. For much of its life, it was in the basement of the Harvard Museum. Exchanged out to a private collector in the early 2000s because it was too big to display there, it certainly is a museum piece for other collections. Most such specimens were melted down at the time, as they were hard for miners to keep, and only the mine captains and managers had access to retrieve such large specimens as this at depth and bring them to the surface for museums or for sale (as a nice side business at the time). The Seaman Museum in the area hosts a large collection and has several large specimens of this magnitude. Almost nobody else, institutionally or private, has such a piece. It is comparable to the very best that have survived and are on display in Seaman, and it is a worthy centerpiece of any exhibition of major USA classics or important economic ore minerals. In person, it has a presence to it that is hard to convey. I have been to this mine and down into it on a tour - the experience is humbling. These came from pockets found after hours of climbing and moving down into the ground, and came up the same long way. At 26 pounds, this was a beast to lug out. It is remarkably pristine and intact and preserves old museum numbering on it. Comes with a custom lucite base. Price on Request. Joe Budd photos.