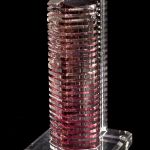 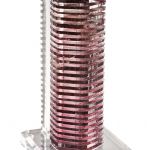 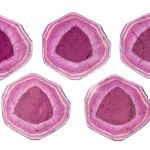 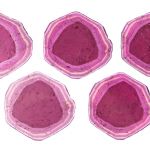 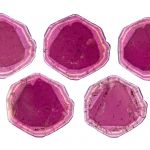 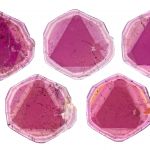 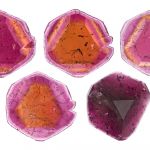 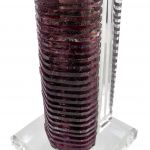 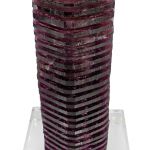 Liddicoatites from this locality represent the classic style for complexly patterned slices, showing the amazingly subtle gradations of color banding that occurs in these chemically-rich tourmalines as one moves up and down their length. This particular crystal is said to be the largest crystal of such quality that has been cut from the modern finds (since mining began again here in the 1990s), according to the man who mined it and in whose collection it resided for about a decade (Dr. Federico Pezzotta). It is expertly cut, with each piece polished superbly to a perfect polish and luster. The patterns and colors of the interior change even from slice to slice, in a graded pattern that could never be guessed at from outside! This piece was found in 2001 and long remained in the personal collection of Madagascan government's geological exploration consultant and collector, Dr. Federico Pezzotta, who is also curator of the Museum of Natural History of Milan. It was exhibited prominently in two side-by-side showcases of Madagascar Minerals at the 2012 Munich Show where the theme was "African Treasures." I exchanged the piece from Dr. Pezzotta's personal collection at that time, and it comes with his label. It is unique and beautiful, as well as highly educational about the nature of this rare tourmaline variety which is found at its best in Madagascar. It is from the pre-eminent collection of our time for minerals of Madagascar, and it displays dramatically in the custom crafted lucite stand made for it. I have never seen the like, and frankly the slices ALONE, if sold separately, add up to a huge value that might even be more than the cost of this specimen because of their quality. Liddicoatite was approved as a new species by the International Mineralogical Association in 1976. The name was, oddly, also recently changed to fluor-liddicoatite. It is one of the species in the tourmaline group and was named for Richard T. Liddicoat (1918-2002), a gemologist and former president of the Gemological Institute of America. Liddicoatite is one of the few sliced and polished species found in serious mineral collections. Fluor-liddicoatite occurs in pegmatites, primarily from Madagascar. It exhibits a very high luster and is found in various hues, from light brown, to pink, red, blue and colorless, sometimes all in one crystal. It forms a series with the most common gem tourmaline species, elbaite. This particular crystal has been sliced into 25 pieces with each one exhibiting color and internal pattern changes from the previous slice - dramatically so! The slices are gemmy and all are of the highest quality. Dr. Pezzotta told me this was the finest large whole-sliced piece he had obtained in his years in Madagascar. Joe Budd Photos. 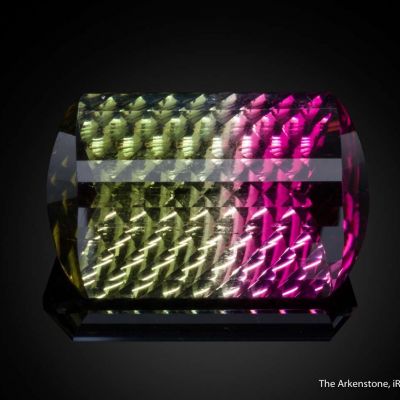