From outer space, looking back at the jewel of the blue Earth and forward at the harsh gray face of the Moon, one can only marvel at the stark contrasts between the two, and wonder about the origins of each. And clearly, only the study of the geology—the rocks and minerals and formations on both globes—can provide answers to these important questions. China, because of its large land mass and its geological and mineralogical diversity, offers a singular place to do such studies—which cannot be conducted without the collecting of specimens.

Apollo explorations of the Moon—the ultimate collecting trips—illustrate the value to science of collected specimens. We carried out the documentation and collection of minerals, regolith (soil) and rocks from six sites. Those explorations and collections partially represent about 5 percent of the lunar surface, or the equivalent of about 20 percent of the land area of China. Only small areas around each site, however, could be explored in detail, given the times available for each mission. However, remote sensing data from various missions in lunar orbit has permitted photo-geological and geochemical extrapolation from various aspects of the knowledge obtained directly from lunar samples. 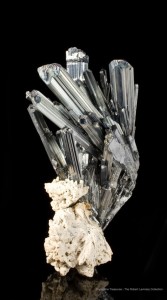 A metallic stibnite from Lushi, Hubei, China. From the Robert Lavinsky Collection of Chinese Minerals, photo by Joe Budd.[/caption]

From the very beginning of planning for the analysis of returned lunar samples, advisors to NASA, including planetologist Eugene M. Shoemaker and this writer, insisted that the results of these analyses be open to the international community. The work of international teams of research scientists, as well as individuals, over the last 43 years have converted the data from the Apollo sample collections into remarkably detailed hypotheses concerning the origin, evolution and resource potential of the Moon. These hypotheses have also illuminated questions related to the origin, evolution and future needs of the Earth, and they have greatly aided scientific inquiry into the nature of other terrestrial (rocky/metallic) planets in our solar system.

Three of the many examples of the scientific return from Apollo serve to illustrate the value of human lunar and planetary exploration. First, the Apollo collections permit the testing of the two major competing hypotheses for the origin of the Moon; one suggesting that the Moon evolved independently of the Earth and was captured by it, and the other suggesting that the Moon evolved from the debris blasted into Earth orbit by a giant asteroid or planetoid impact. Second, the apparent early evolution of the Moon’s crust and upper mantle through the fractional crystallization and differentiation of a magma ocean has stimulated hypotheses related to the evolution of very early magma oceans on all the terrestrial planets and large asteroids. Finally, the existence of a fine-grained, impact-derived regolith on the Moon has elevated the probability that clay mineral templates dominated the surfaces of the Earth and Mars during the formation of life’s precursor organic molecules.

Application of new analytical techniques by a diverse international community to the examination of Apollo lunar samples continues to enrich understanding of the Solar System. In addition to knowledge gained from the discovery of six new titanium-rich minerals found in samples of the lunar mare basalts collected by Neil Armstrong, our understanding of common planetary minerals and their roles in planetary evolution has been expanded by the continued examination of lunar silicates (e.g., plagioclase, pyroxenes, olivine, and zircon), oxides (e.g., ilmenite, spinels and chromite), phosphates (apatite and whitlockite), silica (quartz, cristobalite and tridymite), a sulfide (troilite), and native iron. Further, recent work has discovered that the orange and green pyroclastic glasses contain water in addition to the many other volatile elements previously identified.

Potentially the most important technological discovery made during analysis of lunar samples was the identification of helium-3 in samples of regolith. Helium-3, along with hydrogen, helium-4, carbon and nitrogen, reach the Moon as components of the solar wind. This light isotope of helium is an ideal fuel for nuclear fusion power, both for use both in terrestrial power plants and in interplanetary rockets.

Future lunar exploration has much more to tell science about the Moon and the terrestrial planets. The 95 percent of the lunar surface yet to be explored will surely contain many surprises, particularly in the large basins, the lunar far side, lunar interior and the lunar poles with their additional potential resources. Unique radio astronomy observations from the lunar far side can look out at the earliest history of our universe. Experience and simulation in lunar landings, lunar living and surface exploration will pave the way for the human exploration of Mars. The international community has much to look forward to with a return to the Moon.

As the reader of Crystalline Treasures: The Mineral Heritage of China will learn, understanding of the Earth, the Moon and the planets rests on the foundation of studies of the minerals of the Earth. Such studies will lead to further improvements in methods of extracting those minerals, and will inspire the creation of useful products to improve the lives of all humankind. China, with its huge surface area and extensive mineral deposits, offers a great opportunity to gain such understanding.

Dr. Harrison H. Schmitt, as an Apollo 17 Astronaut, was the 12th and last person to set foot on the Moon. He is a geologist and former United States Senator from New Mexico, and currently works as an aerospace and earth science consultant.
________________________

[hr]Crystalline Treasures is reproduced with permission from The Mineralogical Record. View special thanks and credits for the book.