Why China is blessed with so many beautiful and collectible minerals

Back to Perspective - Liu Guanghua and Dr. Robert Lavinsky

China’s domain of over 9 million square kilometers contains widely varying geographic features, from vast plateaus with high mountain chains in the western regions (including the Himalayas, Tianshan and Kunlun Mountains), to the basin and range systems in the southern and northeastern regions, to the plains of the north and east. In all of these different regions, geological processes within a complex history of tectonic evolution have created a great number of mineral deposits. You can see in the maps presented here how the movement of tectonic plates in geological time has created the belts in which most of the mineral deposits are now located, and from which our mineral specimens come. Moreover, the age of a specimen is known if the age of its deposit has been determined, so that for example we can say that our kermesite specimen was formed 200 million years ago, or our Yaogangxian fluorite approximately 150 million years ago. It is a humbling mental exercise to contemplate the great age of mineral specimens that we hold in our hands, and realize that many of these treasures formed hundreds of millions of years ago. 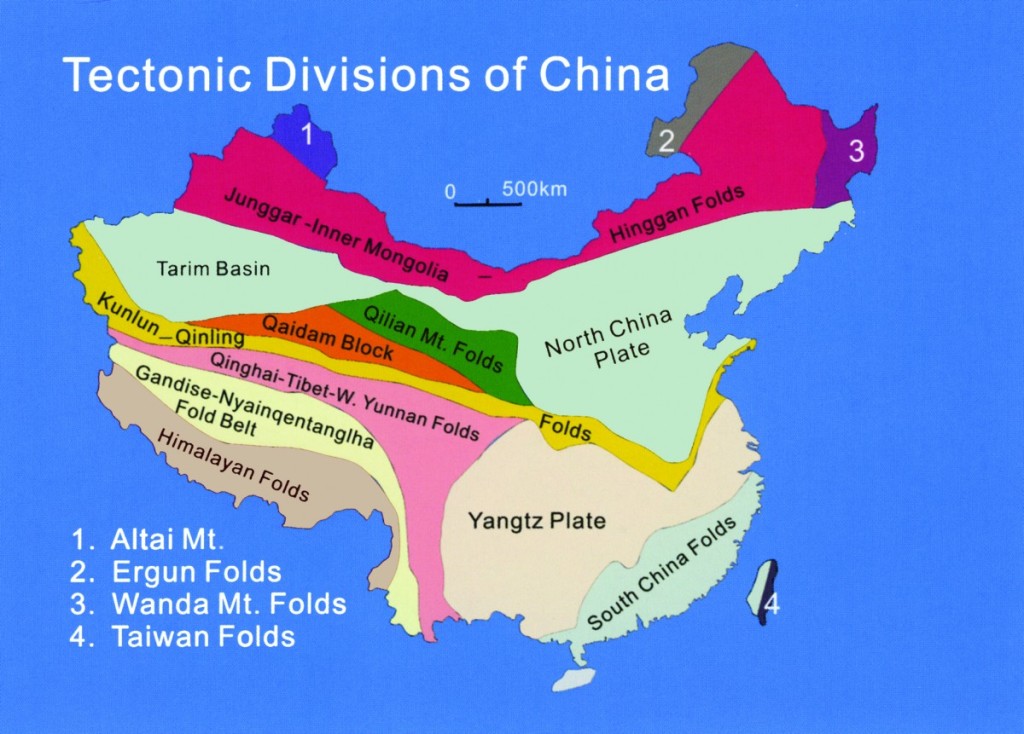 In terms of plate tectonics, the Chinese land mass is a product of a long-term and complex interaction between the Siberian, Tarim, North China, Yangtze, South China, Indian and Pacific plates. Fold zones formed along the converging margins of these plates, whereas basins and plains developed in the stable tectonic settings in the centers of the plates. Mineralization resulting from endogenic processes (i.e. processes occurring beneath the earth’s surface) took place in these mountainous fold zones. For example, pegmatite minerals mainly occur in mountain ranges, deposited from the hydrothermal fluids released by the mobilized magmas that accompany mountain-building.

During the Late Permian and Triassic periods (approximately 250 to 205 million years ago), an integrated new Asian sub-continent formed from the collision of many plates after the earlier super-continent of Gondwana had broken apart. Collision-associated volcanism and metamorphism (changes wrought by heat and pressure) caused extensive mineralization in this mountain zone and the marginal belts of nearby rocks. Again, this is seen clearly in the maps showing productive mineral deposits. For example, the beautiful “chrysanthemum stone” (radiating celestine crystals in rock) of northern Hunan Province, and the unusually large crystals of kermesite found in Shaanxi Province, were formed during this period.

From the Late Mesozoic to Early Tertiary (around 200 to 50 million years ago, while dinosaurs were walking the earth), the Indian continental plate drifted north and collided with the Eurasian continent. This “recent” example of large tectonic movement, continuing to the present day, created uplifting in western China and led to the formation of the Himalayan Range, including Mount Everest and the Tibetan plateau. Almost all collector-quality minerals, including gemstones, in these regions formed during this period. The Gaoligongshan Mountains of Yunnan Province belong to this tectonic zone and are therefore rich in pegmatite minerals and gemstones.

Lastly, the formation of the vast majority of collector minerals so far seen from China, in the metal-rich deposits of Guangdong, Guangxi and Jiangxi Provinces, came near the end of geological movements which commenced in the Late Jurassic and which continue today. These deposits include all the famous fluorite, tin (cassiterite), tungsten (scheelite) and iron mines of this region. These are, to a large degree, products of mineralization that took place when the westward movement and subduction of the Pacific plate took it below the East China margin, beginning in the Late Jurassic (approximately 140 to 150 million years ago); these events made East China a part of an active continental margin. As a result of the upward movement of mantle magma caused by the subduction of Pacific oceanic crust beneath eastern China, and the resulting folding and faulting of mountain ranges, as well as the abundance of groundwater supplied by the high rainfall in these areas, hydrothermal mineralization became very important, creating the kinds of beautiful mineral species that would be coveted, 150 million years later, both by industry and by mineral collectors. 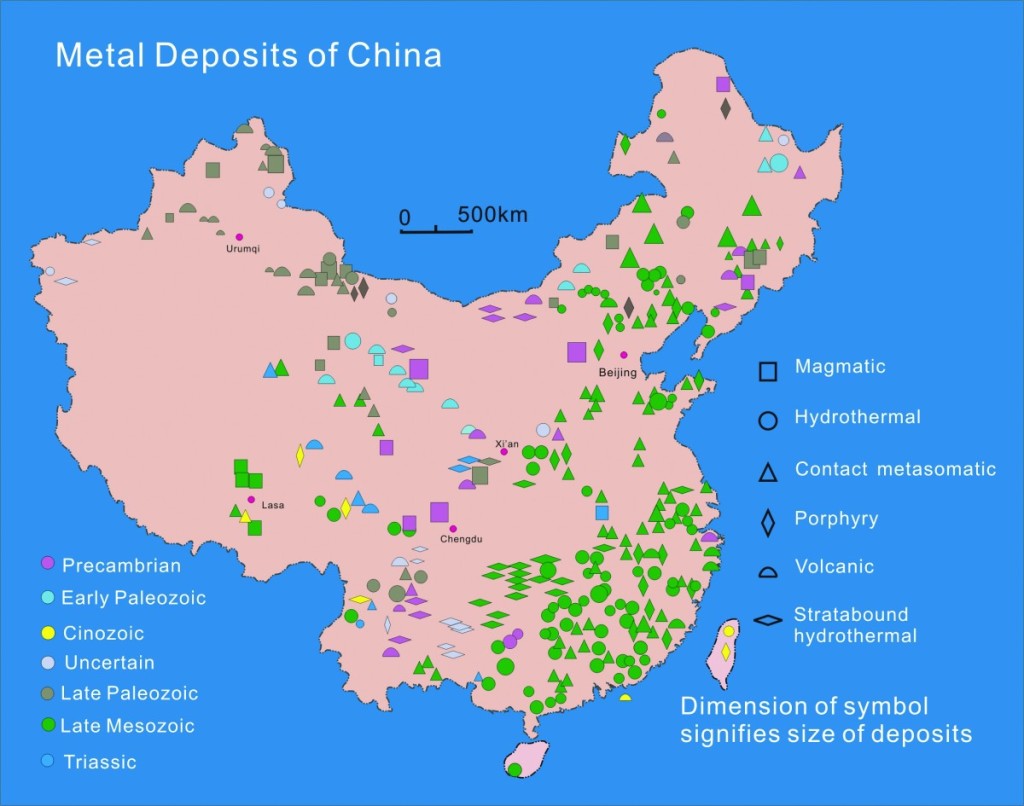 The long-term geological evolution, diverse tectonic patterns, multiple geological processes, and wide range of paleo-climates in China have all combined to produce favorable conditions for mineralization. This explains why 168 types of economic mineral deposits have been found in China. According to their formation and geological settings, we can divide these deposits into endogenic, exogenic and combined types.

Endogenic minerals were mainly formed by magmatic, volcanic and metamorphic processes taking place in the earth. These processes formed most minerals with high physical hardness and chemical stability, including nearly all gemstones. Minerals and orebodies formed by later granitic intrusions and pegmatitic injection are also widely distributed in the mountain zones.

Many economic mineral deposits are formed by chemical alteration of a rock by hot water and other fluids along the contacts between magmatic intrusions and their host rocks. In China this process generally occurred along the former continental margins, now roughly corresponding to the belts of deposits in the accompanying map. Typical deposits formed by this type of hydrothermal mineralization include the copper, molybdenum, lead-zinc, tin and other polymetallic orebodies which produced the specimens shown in the Photo Folio. Most of the collectible mineral species in the rich mines of southern China (including cinnabar, realgar, stibnite, fluorite, calcite, barite and many others) belong to this hydrothermal type of deposit.

Secondary or exogenic minerals are produced by later physical, chemical and biological processes that alter the original mineral deposits. These minerals originate primarily where moisture and groundwater have caused oxidation and hydration of earlier minerals and rocks at or near the surface. For example, in southern China, cave calcite, aragonite and other stalactitic minerals such as hemimorphite and malachite occur in regions where the climate is hot and wet. The beautiful green pyromorphite and golden mimetite, found recently in lead-zinc mines of Gongcheng and Guilin, also resulted from this type of mineralization.

Although a large variety of collectible minerals have been discovered in China, they have thus far come from only a very limited number of localities, mainly in the South and Southwest. However, mineral deposits and mining activities also exist in the vast Northwest and Northeast regions, where there is great potential for the discovery of more collector-quality minerals in the future. 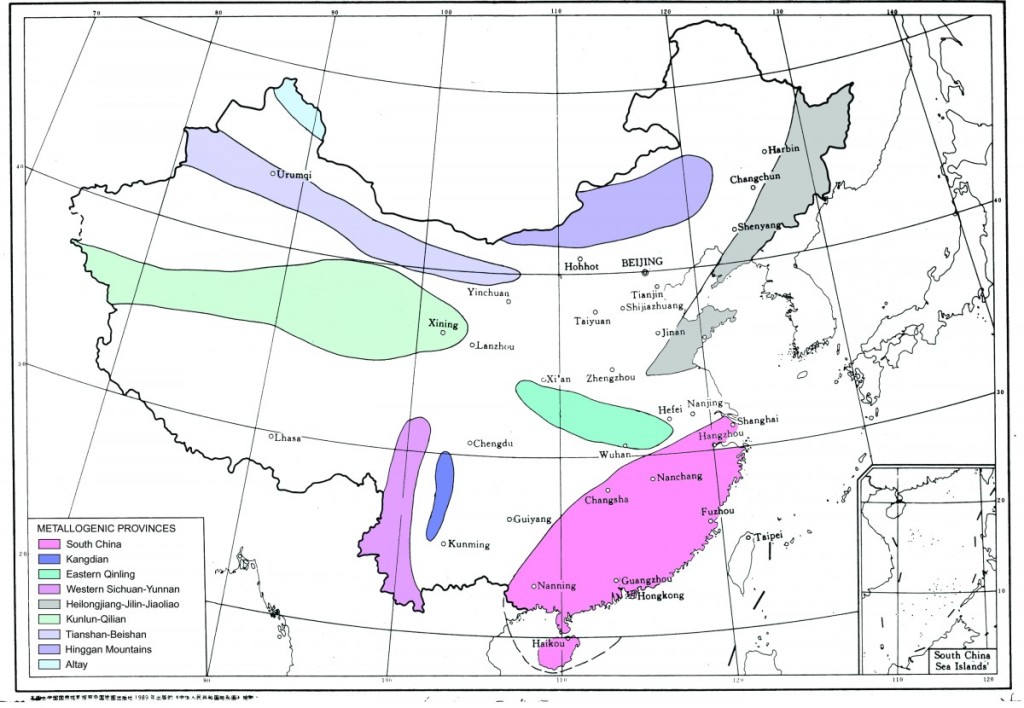 Metallogenic provinces in China, where most ore deposits occur. The movement of tectonic plates over time has created "belts" in which most of the modern mineral deposits of China are now found.