Back to Province Photo Folio 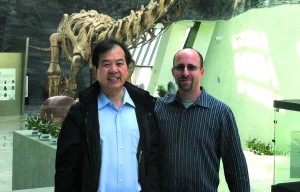 Guanghua Liu was born in Xikuangshan, Hunan Province, where one of the world’s greatest antimony mines is located. After graduating from high school in 1973, he was sent to the countryside (to work on a tea farm) like all youth during the Cultural Revolution in China. He graduated from the Geology Department of the Jiaozuo Mining College in 1978, and went on to earn his Master’s Degree in Coal Geology and Sedimentology from the China University of Geosciences in 1981. That same year he joined the faculty of that institution, first as a lecturer and subsequently as associate professor. In 1987 he went to Tübingen University in Germany as a visiting scholar, and received his PhD degree in Geology there in 1992. He joined the scientific staff of Tübingen University, and also worked as a consultant to several international companies involved in the Chinese coal industry. His wide interests are illustrated by over 90 academic papers and books on geology, coal and coal bed methane technology, and on mineral deposits in English, French and Chinese journals.

Dr. Liu’s residence is in Germany now, where he operates a consulting and trading company, AAA Minerals International. He returns to China often, serving as a guest professor at the Chinese University of Mining and Technology and the Chinese University of Geosciences in Beijing. After selling his coal and gas consulting business in 2010, he became a full-time independent consultant working on projects for natural history museums in China. In 2011 he completed the establishment of the “Guanghua International Mineral and Fossil Museum” at the Wuxi Science Museum and View Stone Park (where his extensive personal collection of minerals is on display), and he is currently working with the Shaanxi Nature Museum in Xi’an, Shaanxi Province, on exhibition galleries devoted to minerals and fossils.

Dr. Liu began collecting minerals in 1988, specializing in Chinese localities, and has been involved in the mineral business on a part-time basis since the mid-1990s. Currently he is spending much time working on the improvement of public education in mineralogy in China, and on developing connections between the Western countries and China for the exchange of mineral collecting ideas and information.

Dr. Robert Lavinsky, proprietor of The Arkenstone mineral dealership, was born in Columbus, Ohio, where he began collecting calcite at age 13. He enjoyed the support of many mentors in the Columbus Rock and Mineral Society, including Carlton Davis, field collectors John Medici and Henry Fisher, and dealers Neal and Chris Pfaff, among others. He eventually expanded his scope to collecting United Kingdom classics, Sweet Home mine rhodochrosite, worldwide classics, and (especially) the minerals of China. As a field-collector he dug for minerals in the dolostone quarries and roadcuts throughout Ohio, Indiana, Kentucky (Halls Gap millerite), Ontario (Bancroft), and various other localities.

Rob received his BA degree in Biochemistry and History from Rice University in Houston, Texas in 1995, and went on to earn his PhD in Molecular Genetics at the University of California San Diego in 2000. The first time he formally sold minerals as a dealer at a show was in 1986 (at the age of 14) at the Columbus Show. During the years from 1986 to 2000 he gradually bought and sold more specimens, becoming a part-time mineral dealer by degrees, and finally becoming a full-time dealer after graduation, in 2000.

Rob feels that his major contribution has been to help move the hobby of mineral collecting onto the internet—his business went online (www.iRocks.com) in 1996, and was among the first to do so. He has also actively sought ways to spur education and interest in old classics and rarities through the venue of the internet, and sells selected reference works via his website. To help encourage young collectors as Rob’s mentors did for him, he sponsors an award for the best exhibit by a junior-division competitor each year at the Tucson Gem and Mineral Show.

Although he has been in business full-time for just a few years, he has handled the sale of a remarkable number of important collections, including all or part of the collections of Dr. Edward David, Marshall Sussman, Gary Hansen, Dr. Eric Asselborn, Carlton Davis, Martin Zinn, Marilyn Dodge, Ed Ruggiero, Richard Hauck, Violet Dawson, Peter Bancroft, Miguel Romero, Lindsay Greenbank, and Herb Obodda, among many others.

The new mineral species lavinskyite was named in his honor in 2012.