5 Incredible Minerals Sold in an Auction

One of the best places to find high quality rare minerals is in an auction. Dealers bring their finest specimens forward for collectors to appraise and cast their bid to take home the prize. Now, with the internet connecting communities from around the world, online auctions like mineralauctions.com are making it easier than ever to bid for incredible rare minerals – bringing more diversity and excitement to the mineral world!

Mineral auctions are growing and sometimes we see news breaking sales of one of a kind minerals and purchases. To celebrate the spirit of mineral auctions and the sought-after minerals ever found, here’s a list of 5 incredible minerals sold in an auction:

The Rockefeller name is woven in the fabric of American history with the Standard Oil Co. Inc. of the 1900s and many other entrepreneurial achievements. Adding to the Rockefeller legacy is the most expensive emerald in an auction, at $305,00 per carat: The Rockefeller Emerald.[1] 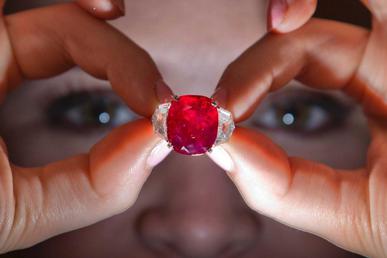 Sunrise Ruby – one of the most valuable gemstones sold at auction – weighs in at 25.59 ct. Cartier Photo.

Rubies are one of the rarest minerals in the world with valuable qualities that are increasingly hard to find in nature. As a red variety of corundum, rubies have an intense red color that come from their chromium impurity, separating them from their sapphire cousins. Large carats of rubies are exceptionally rare, so it should be to no surprise that a 25.59-carat ruby called, “The Sunrise Ruby” sold for a record of $30.33 million at Sotheby’s in Geneva.

Praised as “amongst the rarest of all gemstones” by David Bennet, head of Sotheby’s international jewelry division, The Sunrise Ruby is one of the few rubies in the world to have the rare grading of pigeon’s blood color at its size.[2]

Described as “flawless” by the gemstone world, the 12.03-carat Blue Moon of Josephine was auctioned for $48.5 million at Sotheby’s in Geneva.[3] The diamond was bought by Joseph Lau, a billion from Hong Kong, as a gift for his daughter. The Blue Moon of Josephine is an exceptionally rare blue diamond with a hue described as Fancy Vivid by the GIA. Fancy Vivid describes a gemstone whose medium to dark tones are strongly saturated and have only been found in 1% of all blue diamonds.[4] Photos here.

Earlier this year, the attendees of Sotheby’s in Hong Kong witnessed history as the world record for the most expensive gemstone ever sold at auction took place. The 59.6-carat Pink Star Diamond, a diamond recognized as the largest Internally Flawless Fancy Vivid Pink by the Gemological Institute of America (GIA), sold for $71.2 million.[7]

According to Sotheby’s, The Pink Star Diamond was mined by De Beers in Africa in 1991 and was 132.5-carats. The rough diamond was then “meticulously cut and polished over a period of two years.” View the results!

Want to stay up-to-date on the latest news and events about the mineral world? Register for the Arkenstone’s mailing list for information on the latest findings, news, and many mineral show announcements throughout the year!