The 2017 Dallas Mineral Collecting Symposium is a unique annual event that brings together mineral enthusiasts and experts from around the world to review the latest and greatest findings, collections, and forerunners in rare minerals. This year, the Dallas Symposium starts August 25th – 27th at the Eisemann Performing Arts Center and promises to bring forth the most exciting lineup of scholars, collectors and adventurers! Some of the lecturers presenting at the 2017 Dallas Symposium are: 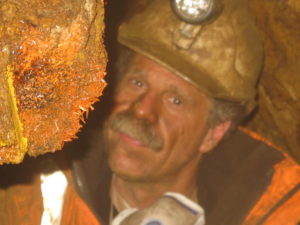 John Cornish in the Adelaide mine. Photo courtesy of J. Cornish.

An expert in all things crystalline and paleontological, John Cornish is respected for his contributions to field collecting. John is affiliated with several specimen mining properties in the western United States with many of his discoveries displayed in premier institutions and collections around the world. Currently, John is working on chronicling this 20+ year pursuit of mineral and fossil localities.

At the 2017 Dallas Symposium, John will share some of his adventures of successfully mining crocoite in Australia’s Adelaide Mine. His lecture will be accompanied be accompanied by a colorful and story-rich presentation, highlighting many of his historic findings and experiences in field collecting. (Check his blog series here that he allowed us to publish!)

Bruce Bridges – The Tsavorite Mine 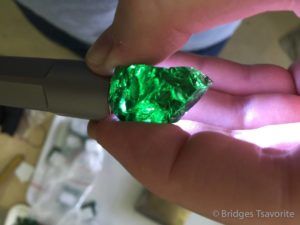 As a third-generation gemstone miner and dealer in Africa, Bruce Bridges is making his name known throughout the rare mineral world as the President of Bridges Tsavorite company. His father, Campbell Bridges, was the discoverer of Tsavorite and was the first to bring Tanzanite to the United States for Identification. Today, the family business maintains its fully integrated operation, from mining to sales of rare and valuable minerals.

Bruce Bridges will give a rare first-hand account of the history of Tsavorite and the life of his father. The Bridges family’s expertise in geology and business have allowed them to pursue some of the rarest stones of East Africa. In addition to these adventures, Bruce will discuss the development of the famous Scorpion Mine and the growth of the Tsavorite mining industry in Kenya. Read more about the Bridges family at Tsavorite.com 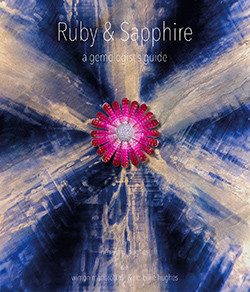 Ruby & Sapphire • A Gemologist’s Guide by Richard Hughes, a speaker at this year’s Dallas Symposium

One of the world’s leading experts on rubies and sapphires, Richard Hughes has spent a lengthy career authoring several books and over 160 articles on gems and gemology. Over the years, Richard has received many industry awards.

Some of his most notable awards include the 2004 Edward J. Gübelin Most Valuable Article Award from Gems & Gemology magazine, the Richard T. Liddicoat Journalism Award from the American Gem Society, and the 2010 Antonio C. Bonanno Award for Excellence in Gemology from the Accredited Gemologists Association. Richard’s latest book titled, Ruby & Sapphire: A Gemologist’s Guide (2017) is his most comprehensive volume of work on rubies and sapphires to-date.

Attendees of the 2017 Dallas Symposium will have the special treat of hearing Richard Hughes uncloak the mysteries surrounding fine corundum specimens. Richard’s lecture will discuss the links between the mineral, their deep connection to human history, and their impact on life itself. Learn more about Lotus Gemology here.

These are only three of the speakers who will be sharing their expertise at the Dallas Mineral Collecting Symposium. If you’re looking to learn about minerals, crystals, and gems, you don’t want to miss this year’s Dallas Mineral Collecting Symposium at the Eisemann Center, as experts, scholars, and adventurers from around the world come to share their latest and greatest findings! Registration for the symposium is open now and throughout the event. A Full Symposium Ticket includes all of the events listed above, including the open house cocktail party at The Arkenstone, Saturday’s lectures, lunch, benefit auction and banquet, and passes to the Perot Museum of Nature and Science.