Robert Lavinsky was born 13 December 1972. While still a youth, he was “found” by Carlton Davis collecting fossils by the side of the road in rural central Ohio (Carlton, a well-known collector, was a member of the Columbus Rock and Mineral Society). After exposure to the club, Lavinsky’s interest in minerals grew rapidly – a testament to the patience and time spent in those days by mentors in the community and in the local club circuit. John Medici, another club member, actually took him on his first field trip at age twelve to Lime City, Ohio (with his mom, for liability reasons). Rob became a part-time mineral dealer by age fourteen, selling self-collected Ohio minerals to support his emerging hobby and setting up at the Columbus and Cincinnati shows (where he met Terry and Marie Huizing and purchased his first subscription to Rocks & Minerals!). 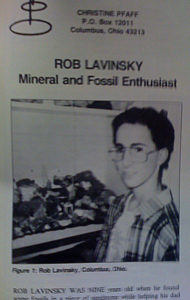 He also met Neal and Chris Pfaff, who were phenomenal field collectors and “the most fair mineral dealers ever,” and ended up working for them while he was in junior high school. At that time the Pfaffs specialized in offering tables at shows with specimens that were $10 each or 3 for $25. Selecting and sorting such specimens from their finds taught Lavinsky a lot about quality and value. Many days they sat sorting minerals and gluing thumbnail specimens to toothpicks, while watching Star Trek reruns on television. At shows in Ohio, he would run around looking for bargains to trade or buy and then sell his “finds” from card tables in the “junior dealers” area of those shows. His first $500 mineral specimen was from the Rocksmiths, who, in the mid-‘80s, let him save up a year’s worth of “swap dollars” to buy a special Indian apophyllite. At first Lavinsky tried collecting everything, but he quickly focused on calcites and even started exhibiting at local Ohio shows. A harsh judging at the Berea (Cleveland area) Show admittedly reduced him to tears and convinced him that his talents were not in labeling or organizing an exhibit case at that time!

The mineral hobby transitioned from summer collecting to a business after Lavinsky went to college (and to his first Tucson Show) in 1991. During his sophomore year at Rice University, he realized that in order to graduate while doing science research work in the evenings, he would need to support himself through his hobby instead of getting a “real job.”

As an undergraduate student at Rice University (a BS in biochemistry and a minor in ancient civilization), Lavinsky was conveniently across the street from the Houston Museum of Natural Science. In 1992, the Fabergé exhibit came to Houston from the Fersman Museum in Moscow, Russia. Dr. Dmitriy Belakovskiy was sent to accompany the exhibit with a one-way ticket from Moscow and very little money for living expenses. Joel Bartsch, museum curator at the time, introduced them, and between Lavinsky’s high school Russian classes and Belakovskiy’s rough English, they became friends. In a gesture of kindness, Bartsch gave Belakovskiy two folding card tables to sell minerals at the exit from the glamorous Fabergé exhibit—most of them at $1, $2, $5, and $10 each! Between classes, Lavinsky sold from the tables, wheeling and dealing with the specimens. As a college student with fast computer access (for that time), he started some of the first email swap/sell lists before the days of websites. This enabled him to sell to dealers and collectors he had known since his childhood in Ohio, from the show circuit. However, he made his first large deals with the Fersman Museum, and he was hooked as a dealer, in hindsight, even if it took a few years to sink in to him what was obvious to others. He spent a lot of time visiting collections and learning from collectors, who became his friends and customers, but the early deals with the Fersman really set him on a new road.

Before moving to San Diego for graduate school in 1995, Lavinsky created his own website – the largest and one of the first websites with a purposefully made broad catalogue listing prices and showing the values of contemporary collector specimens rather than more common things for the public. Rob was propelled by the volume he was selling on the Internet to become a “Main Show” dealer at Tucson.

Despite the lure of dropping out to become a mineral dealer, Lavinsky earned a PhD in Molecular Genetics (“Genetic Engineering”) in 2000. While writing his doctoral thesis and with a child on the way, he realized the life of a postdoc working in a science lab was suddenly not quite as attractive. He debated whether to go into biotech or work at home as a mineral dealer.  He chose the latter—and never looked back.

Since those early Tucson days, Lavinsky has been a dealer in the Tucson Gem and Mineral Show™ (TGMS) for twenty years; he has promoted the TGMS and its educational opportunities on his website and encouraged junior collectors with monetary awards for their exhibits. To build on the educational aspect of the hobby, Lavinsky (in close partnership with Gene Meieran) started an annual mineral symposium in Dallas that now attracts hundreds of collectors for a mineral immersion weekend; he also signed on to help with Thomas Nagin’s PBS television show, Mineral Explorers.
Another of Lavinsky’s projects was to be a sponsor of The World’s Most Precious Treasures, a reality television show following gem tanzanite from the mine to the market in Tucson; it was made by French National Television in association with the gem company Cartier of Paris. In addition, he organized and planned the Chinese Crystalline Treasures exhibition at the University of Arizona in 2013 in conjunction with partners at the university. The book on the exhibit (published by the Mineralogical Record but funded by Lavinsky) is really a short introduction and primer to collecting fine minerals in general; it was published in Chinese by the Hunan Provincial Government (the first officially authorized and translated U.S. mineral magazine issue of any kind in China). He has taken the educational mission in China very seriously. Another book that he financially backed for publication—this one for children—was A Quest for Shiny Purple Crystals: Johnny and Max’s Rock Hunting Adventure,” by Monica Rakovan.

Locally, Rob has worked with the Dallas Zoo for ten years and the Garland Public School District for six years, by introducing the Nature Exchange program, an initiative that brought minerals to many children in the area through a trading “shop” that involved them learning through acquisition. (Read our blog post about the Nature Exchange program!) He is an avid source and donor of rare species for research to many museums, most notably the Smithsonian and the University of Arizona’s RRUFF project for systematic mineralogy, where he is a board member.

Rob sees his contribution to the field as, despite his dealership, more in the distribution of information to show people why we love what we love. This educational push has led to endeavors that help to grow the field.

Lavinskyite, ideally K(LiCu)Cu6(Si4O11)2(OH)4, is an unusual double-chain copper silicate discovered in the Wessels mine, Kalahari manganese fields, Northern Cape Province, South Africa. It is named in honor of Robert Matthew Lavinsky, the founder and manager of The Arkenstone in Dallas, Texas. Lavinsky has donated important mineral specimens to the Smithsonian Institution, Harvard University, the California Institute of Technology, the University of Arizona, and other institutions. Lavinsky recognized that some of the specimens he was bringing back from South Africa might be new species and provided the samples on which the description of lavinskyite is based. Lavinskyite was found on multiple specimens from the central-eastern orebody of the Wessels mine; it was first thought to be effenbergerite. It is found in an assemblage of massive pectolite, richterite, and sugilite. This assemblage is likely the result of hydrothermal activity. Lavinskyite occurs as pale blue vitreous transparent crystals with a pale blue streak, has a Mohs hardness of about 5, and is associated with dark blue scottyite. Crystals to 0.5 mm are tabular on (010) with a perfect cleavage on {010} and no observed parting or twinning. 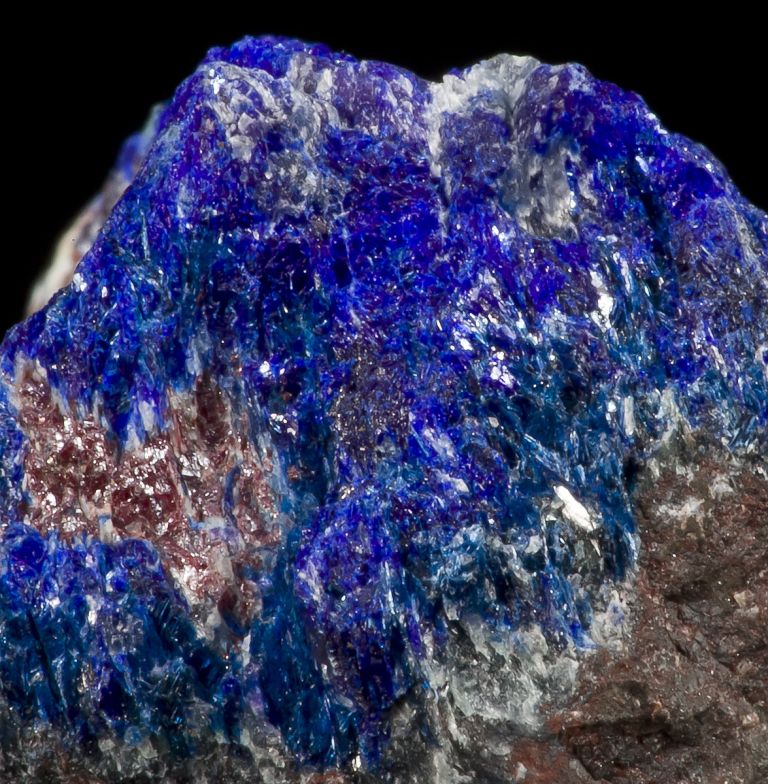 Structurally, it is isotypic with plancheite, having brucite-like layers sandwiched by amphibole-type double silicate chains running along the c-axis. Copper silicates with silicate double chains are fairly rare in nature; lavinskyite joins plancheite, shattuckite, and liebauite to make what is now realized to be the plancheite group (Yang et al. 2014). 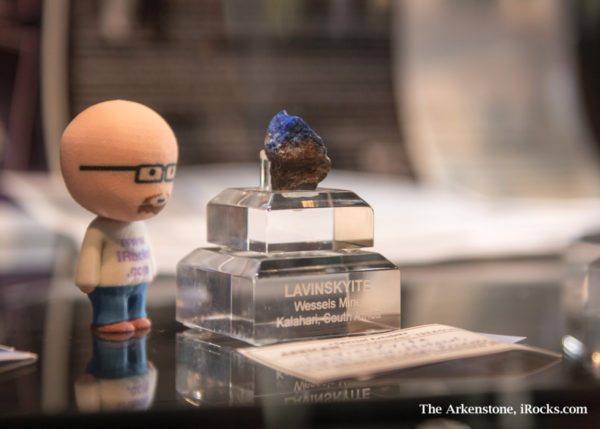 Lavinskyite was named after Rob Lavinsky, the founder and owner of The Arkenstone.

We thank Elaine Blacker for help in making this article happen through her edits and typing skills.

Gail and Jim Spann are collectors of fine minerals from worldwide localities and have immersed themselves in the hobby during the past eleven years.