Customers sometimes ask us to explain what people mean when they refer to pegmatite or pegmatite specimens, and we’re happy to talk about this topic close to our hearts.

To some of us, pegmatites are the most captivating of all igneous rocks. In the absolute sense, they are an exceptionally coarse-grained intrusive igneous rock that can range in composition from mafic to granitic to syenitic. For our purposes; however, we’ll stick with pegmatites that are roughly granitic in composition.

Beryls, tourmalines, spodumenes are some of the finest minerals extracted from the earth. These treasures form in pegmatites – holocrystalline, intrusive igneous rocks composed of interlocking crystals, which result from the progressive crystallization of magmatic fluids. Imagine a magma making its way towards the surface, cooling slowly, and crystallizing out minerals– first, high-temperature minerals that tend to contain heavier elements, and then progressively lower and lower temperature species. This process is called crystal fractionalization – and it creates a magmatic melt that becomes increasingly felsic (rich in silicon). The concentration of water, gases, and light elements (Be, Li, B) increases at each step in the temperature gradient. 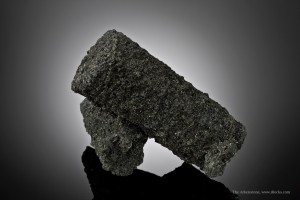 A schorl pseudomorph of aquamarine from Erongo, Namibia pegmatite. Schorl is a type of tourmaline found in pegmatite.

Many of the world’s largest crystals come from granite pegmatites such a spodumene crystal from the Etta pegmatite in Keystone, South Dakota, that was 47 feet long! They are host to spectacular gem crystals of the Beryl Group and their varieties (aquamarine, morganite, heliodor), the Tourmaline Group (elbaite, schorl, “liddicoatite”), and spodumene (kunzite, triphane, hiddenite) that represent some of the finest mineral specimens extracted from the Earth! Granite pegmatites can be complex in composition and contain a diverse suite of exotic minerals and tend to be enriched in what geologists call “incompatible elements” or “rare elements.” These include cesium, rubidium, lithium, beryllium, tantalum, niobium, tin, boron, and zirconium, along with a few others. They are unusual because they have either very large or very small atomic size, and low or high charge and don’t easily fit into the crystal structure of common rock forming minerals and, therefore, tend to form minerals and crystals on their own such as pollucite (Cs), spodumene (Li), beryl (Be), “tantalite–columbite” (Ta, Nb), minerals of the tourmaline group (Li, B), and cassiterite (Sn), to name a few.

Pegmatites are generally associated with a “parent” granite in some way and can form at relatively deep to very shallow crustal levels. The shape of pegmatite bodies range from from tabular to inverted teardrop-shaped and range in size from several tens of meters up to a kilometer or more in extent! Complex pegmatites are often zoned from the outside in, forming a wall zone with the contact of host rock then progress inward with intermediate zones and then a core that is generally quartz-rich. Cross-cutting metasomatic or replacement bodies formed at a later stage are sometimes enriched with albite (sodium feldspar) and rare-element-bearing minerals such as lepidolite, tantalite-(Fe), wodginite, simpsonite, ixiolite, and tapiolite-(Fe). 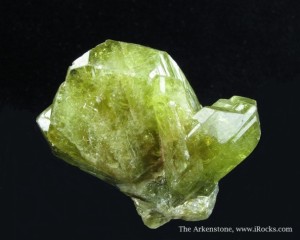 This chrysoberyl twin specimen for sale was found in the 1950s and comes from pegmatite in Brazil.

Miarolitic pegmatites emplaced at shallow levels under low pressure retain a vapor phase in the melt upon ascent through the Earth’s crust. Much to the satisfaction of the lucky gem or specimen miner, these ultimately form miarolitic cavities – large crystal-lined pockets, in which spectacular crystals of beryl, tourmaline, spodumene, topaz, and accessory minerals can occur. Check out the main iRocks website and its mineral galleries! These miarolitic pegmatites are a rich source of gemstones such as aquamarine, morganite, heliodor, rubellite, indicolite, “liddicoatite”, kunzite, topaz, brazilianite, spessartine, chrysoberyl, and fluorapatite.

Geographically, pegmatites are found on every continent and their age spans most of the geologic timescale with certain time periods having a higher distribution than others. Countries containing renown pegmatites include Brazil, Mozambique, Pakistan, Afghanistan, USA (California, Colorado, South Dakota, and the New England area), Madagascar, Burma, Canada, Italy, South Africa, Norway, Russia, and Germany.

Given the number of pegmatites you’ll discover on the internet, you might begin to view them as abundant – however, geologically these pegmatite minerals are incredibly rare. Because they result from the refinement of huge volumes of granitic magma, their formation is almost improbable. According to Dr. David London, beryl-rich rare-element pegmatites constitute 0.003 percent of the entire magma body. Tourmalines and spodumenes reflect similar concentration percentages for boron and lithium.

Gem quality crystals reflect only a small percentage of the beryls, tourmalines and spodumenes in each pocket. When taken under consideration, this makes the amazing aquamarines, morganites, elbaites, and kunzites (loved and valued by collectors, worldwide) exquisite – and exceedingly rare, geologically… So keep an eye on those pegmatites, and you may find yourself with a real prize!

For further information on Pegmatites, explore the following resources

Minerals of the Lavra do Enio pegmatite

The Italian Island of Elba