The Arkenstone, Natural Treasures of the World

Natural Treasures of the World:
The Origin of Precious Gems

Dr. Lavinsky, part adventurer, part scientist, and one of the preeminent dealers of precious mineral treasures in the world, will host a celebration of these extraordinary natural works of art as a rapidly ascending new asset class.

The extraordinary minerals and crystals that Dr. Lavinsky trades in are tens or hundreds of millions of years old. They are kept in their natural form and are even more valuable for their natural beauty without being cut into gemstones. Tanzanite, aquamarine, emerald, ruby, fluorites, sapphire, tourmaline, garnet, and quartz—all gloriously familiar gemstone names. But, rarely are they seen in their natural form as they came out of the earth, except in major museums such as London's Museum of Nature and Science, or our own Smithsonian and Dallas’ Perot Museum (which has many of his specimens on loan or display).

Dr. Lavinsky has almost singlehandedly reinvented and impacted fine mineral collecting as it emerges internationally from an old-fashioned ‘hobby’ into the larger world of fine art assets and collectibles. His acumen has placed the beauty of nature’s art and precious minerals from deep inside the earth into the hands of collectors around the world, collectors who have never before had the experience except as mere visitors to major international museums.

Long held as the private and unique treasures of royalty such as Archdukes of the Hapsburgs, and major industrialists such as Andrew Carnegie and J.P. Morgan, these treasures are rapidly being added to major fine art collections around the world. 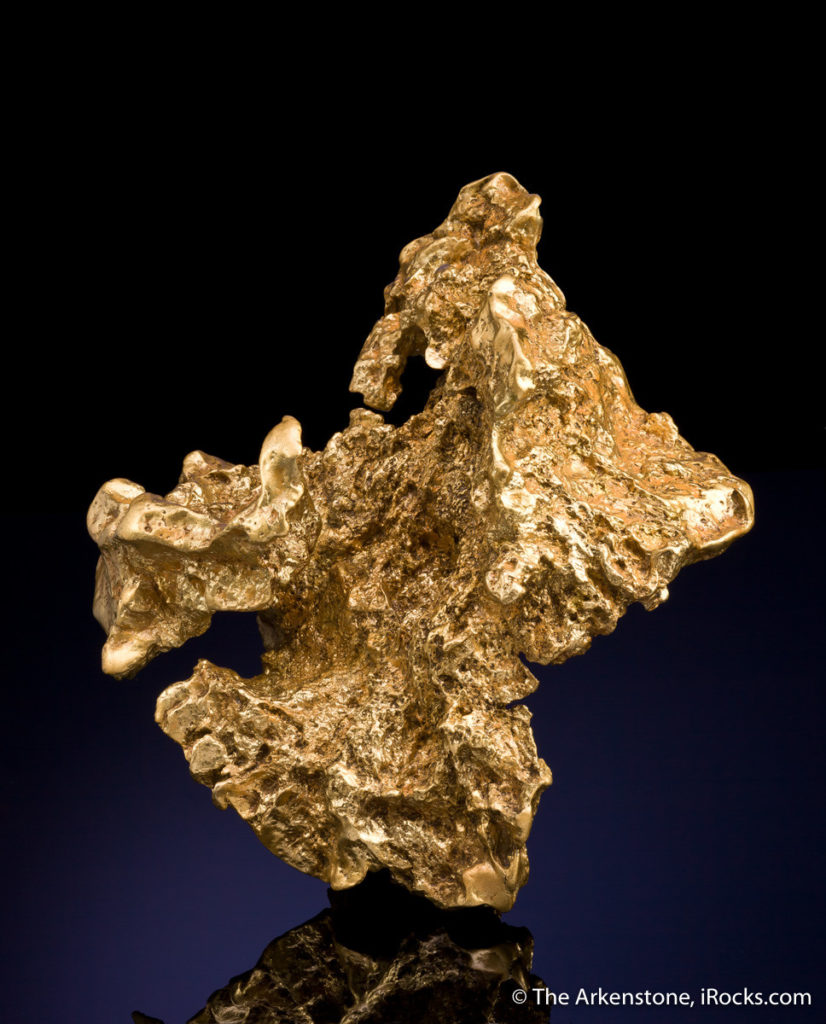 At over 50 pounds, the Ausrox gold nugget has been on exhibit in the Perot Museum, Houston Museum of Natural Science, and the Melbourne Museum.

Dr. Lavinsky has traveled across the globe in search of the finest mines, the finest unique specimens, and the most important hidden international collections. He has filmed, in partnership with Cartier of Paris, a project showing natural tanzanite gems coming from the mine and formed into an exquisite piece of jewelry, as well as, crystals for museums, all while trading another precious mineral for an extraordinary Bentley of the same color. He has assembled runners on the ground as his eyes and ears in remote countries and mines in Brazil, India, Australia, Madagascar, Pakistan, Russia, Mexico, and China (where he curates the very best Chinese minerals). He is a partner in one of the world’s most "sparkling" quartz mines, in Arkansas.

On several occasions, with just a photo, he has exchanged millions of dollars for minerals and crystals that have just emerged from a remote mine. He once even dropped everything and hopped on the next plane to Australia to compete with the Melbourne Casino and the Australian Government for the right to purchase the largest single gold nugget in private hands, coming away with it after a handshake and kangaroo steak. It now resides in the Houston Museum of Nature and Science on loan from a private collection.

Dr. Lavinsky established the first high-level online presence for the mineral collecting world in the mid-1990s, catapulting his business into the first truly worldwide dealership in the trade. His website helped drive the growth of the trade in fine minerals as it educated people around the world. This has eventually led to the creation of a large art gallery display and private museum of crystals (20,000 sq. feet) in Dallas and a smaller gallery in Shanghai, China. Today, as with any collectible art, people collect minerals for many reasons, including their favorite countries of origin (as does Rob with his China collection), historical locations, chemistry and science, color and size - or simply to have the overwhelming pure beauty of these natural treasures in their homes.

Rob began his personal collection of Chinese minerals nearly twenty years ago even before the market realized how under appreciated Chinese mineral specimens were at the time; and now has the world’s largest overall Chinese mineral collection. He also published his book “Crystalline Treasures: The Mineral Heritage of China,” in 2013 with the help of the Chinese government who has since asked him to help educate them on minerals through his book and talks given in China.  They have translated his book into Chinese and have distributed it to communities in rural China and through the Ministry of Land and Resources.  With a new understanding of crystal collecting and the economic value it can bring to miners, their mission is to educate and empower rural mining communities to more sustainably harvest mineral deposits for longer-term gain, that helps local communities. 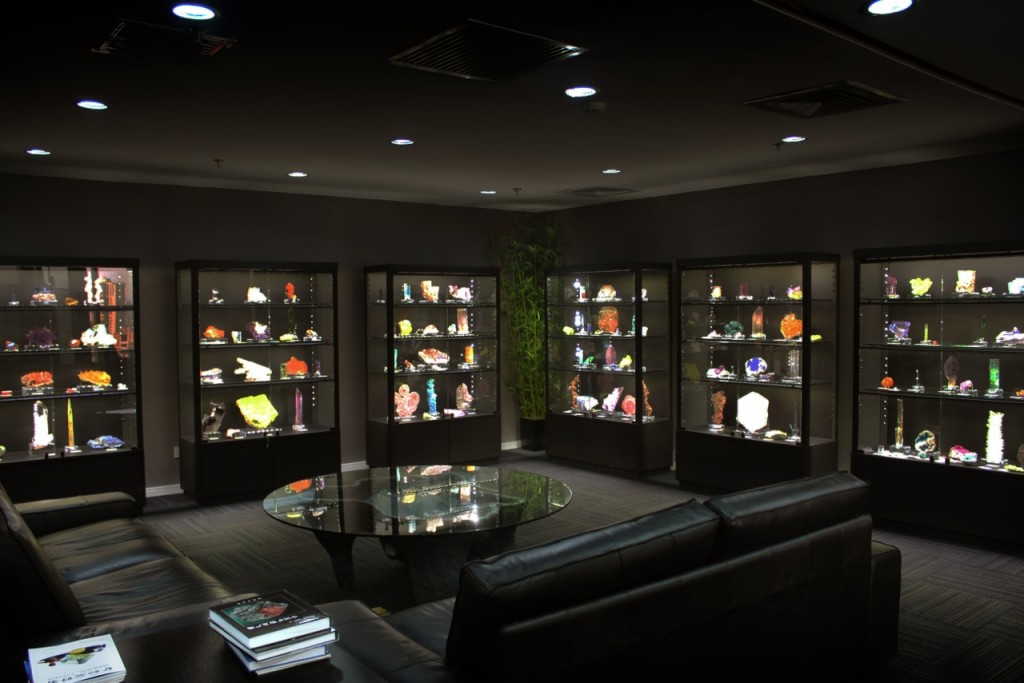 The Arkenstone Gallery of Fine Minerals in Shanghai

Minerals have an extraordinary and inherent energetic quality, drawing the viewer into their raw, natural beauty while creating a connection to the earth through the prism of eons of time. These crystals are nature’s true art form, revealing a brand-new world of awe, wonder and appreciation, as well as now, of serious investment. Fine minerals as an asset class are rapidly increasing in value as proven by the growth of the private market and the interest of more art collectors coming into play, especially from China. Auction houses are now paying attention to the field: Sotheby's, Christie's, and Heritage Auctions in Dallas. The investment value lies in the rarity and the beauty of these timeless natural treasures, that makes them each a unique work of art.

Dr. Lavinsky: “There is admittedly a huge inertia barrier to entering a new field as young as ours, and without trends of documented prices in the auction market. At the same time, though, that makes it MORE of a challenge and a hunt, and offers the thrill of acquiring “sleepers” and values on pieces collectors cannot get on comparable levels of items in the real Art World out there. Rob has sponsored much education and outreach such as a show on PBS (Mineral Explorers, airing nationally), and helped to create an international web of collectors.

“To me, our field offers the chance to own something significant, especially at the current price points, compared to almost any other field of art one might collect, which offers the collector the same visceral thrills of handling a 3-dimensional, unique and timeless object. However, people must first see and be inspired by the beauty, provenance, and legacy of the treasures. Investment comes next. I have staked my own life and livelihood on that certainty. Our Van Goghs cost a fraction of what other fields of Art can value their treasures at, and we have the added bonus of having new Van Goghs we can chase after that come out of the ground each year!”