The Adelaide Emails, John Cornish in Australia - 4 of 5

If you missed the first few e-mails in the series, start from the beginning at Part 1.

8:33 pm. Today was a great day and it went by way too fast! I’m a short-timer now, only a few days left before I go home, heading back to America. Feeling the pinch, I’m very much trying to maximize my efforts here. Sadly, the days just seem to fly by, fast, like I’m a kid counting the last days of Summer…

For Bruce and I, our day started pretty much as usual. We met at the mine, got the fire going, and discussed our stratagem for the day…

Yesterday had been a brutal physical day for me. I’d spent the majority of my time underground driving the hammer, raising the ceiling and cutting deeper into, above and behind, the “refrigerator” rock I’ve mentioned previously. My goal, other than to remove mass, was to punch into the pocket up high, above the rock, so as to figure from a different more advantageous position, the best solution to pursue to collect safely the incredible crocoite crystal groups generously covering the surfaces of several areas surrounding.

In performing this task, right at the end of the day, at the highest area of our raise, I hit a super spongy area where the hammer just dove into mucky-clayey-rock-and-crocoite-goo. Some of this I’d peeled and scraped away, but everything just seemed, just felt “right”. I knew the pocket lay just beyond.

But, it was late, everything would have to wait until the morrow…

Well, the morrow is now today and it’s time to get to it!

I went underground first and shot some pictures and then after, Bruce went in to get his shots. That done, we next set to extracting a killer, precariously hanging large plate of stunning, perfect crystals from the bottom area of the refrigerator. We’d recovered a killer specimen the day before from this area, it was over a foot across in both directions, bright-orange and perfect.

As we’re going after it today, this new specimen would be even bigger!

Bruce had the lead. Utilizing open space I’d made with the electric hammer, he used a saw to back-cut and define the large specimen. When satisfied, and after a little adjustment here and there, he was where he wanted to be and satisfied, he backed away and it was my turn to step in. I’ll be catching this time. We’d left the muck pile high so I could position myself directly beneath the pocket, resting on an over-turned flat’s back-side. There, I’d brace my left arm a’top my left leg. By snuggling in tight, I was hoping to, attempting to, uphold and support the plate solidly. When positioned to best advantage, I called Bruce back in.

Bruce, while avoiding my fingers and head, positioned himself solidly and with some force, jammed the bar in deep, lodging it within the cut we’d made using the hand saw. It took several stabs to find the sweet spot, but once there, we made magic happen as he pried down on the bar, levering the plate away from itself and into my waiting hands.

This happened perfectly, slowly, one minute nothing and then next I heard the tiny grinding and then louder popping sounds as the rock cracked and snapped and then whooom, my hands were full and I’m holding a ton of treasure for all I’m worth! 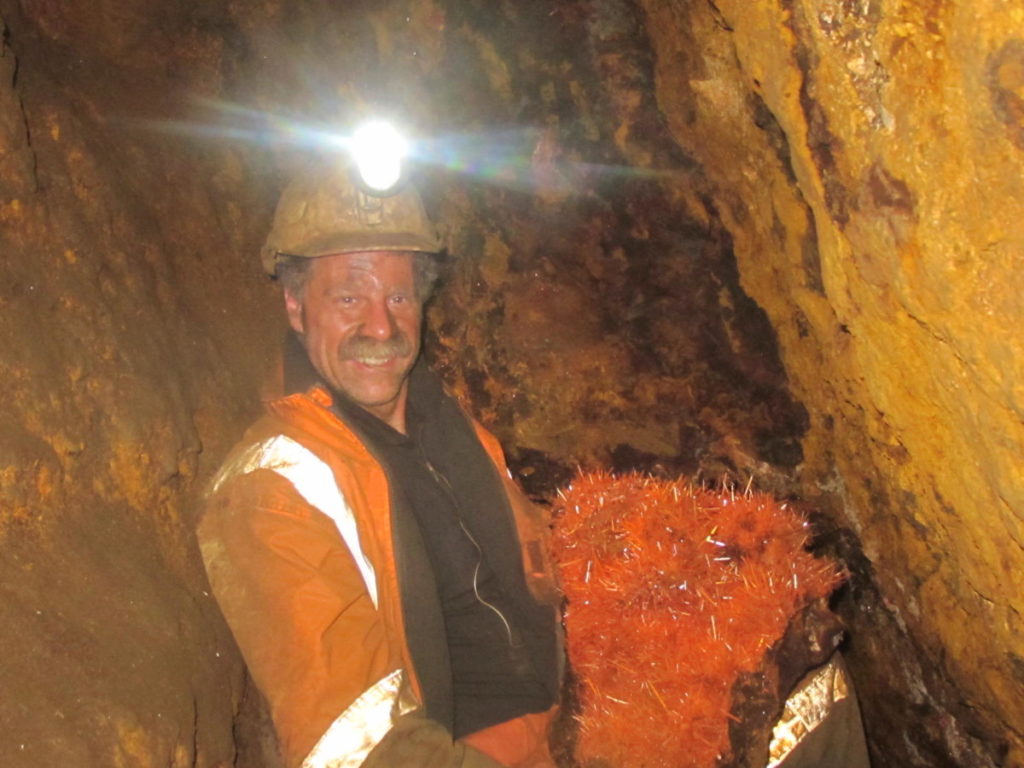 Mining is dirty work underground in the Adelaide mine in Tasmania. Photo courtesy of John Cornish.

Once there, with that monstrous crocoite treasure in my arms, I was thrilled, energized, pumped. There was no way I was going to fail, to lose the piece, I had our treasure held solid. Bruce had done his job perfectly and had backed away with the bar when the rock split. When the specimen dropped into my hands, I was ready for it and while it was heavy and cumbersome, I was thrilled that I had it secure, tight, I just needed a tiny bit of help to complete my task and next ya know, there Bruce was, helping perfectly. Grabbing the specimen’s edges carefully as I’d instructed, and with me latched-on tight, Bruce pulled us both back, allowing me the room and momentum to twist the rock forward, around my body, to a perfect resting position.

With it down, we were elated, smiles and “Good jobs!” abounded. The specimen, originally all but hanging upside-down, was now down and out, we’d done it, another perfect treasure recovered! We snapped off a ton of pictures. It was approximately 15 inches across and absolutely stunningly glorious!

With the specimen down safe, after a breather, we next set to finishing the job and grabbed it up and carefully hauled it out towards the tunnel mouth. There now at rest, it’ll wait until the 14th or the 15th, when we’ll load it up into the Subaru in anticipation of my returning to Adam’s.

Satisfied, lunch followed next, bolstered by a hot cup of tea.

After, Bruce finished eating first and with me still munching away, he headed in and began working up high in the raise where I’d left off the day before. There, he found the soft, punky-area I’d mentioned. Five minutes of poking, prodding and prying later and he was looking into the growing maw of a large cavernous black void… Finally, we’d broken through above the refrigerator rock and my-oh-my, what a view!

Revealed in two different areas, above and ahead, we could see open space over a dozen feet away! There was some crocoite showing, especially as we opened the hole further (this included not just hand tools, but a decent spell with me driving the hammer to effect), making a body-sized opening which really allowed us a view within.

Crocoite pockets extend into the mountain in the Adelaide mine. Photo courtesy of John Cornish.

This was a very exciting time for us, we’d spent considerable time and effort looking for this feature, using our best insight, our hope and our belief to guide us. Vindicated, before us, a promised-land beyond our wildest expectations stretched into the darkness beyond.

And more, we’d made it here safely. Even as things had ramped up, challenge after challenge, we’d stepped up our game accordingly and together, we’re doing a great job!

What a day; a killer plate recovered, technical and difficult x 10, but we’d done it; and vindication, we found the target we’d set out to discover and in finding it, we’ve opened an entirely new level of the Red River pocket system, its highest yet!

As a final compliment to the day, I saw two bounding and bouncing Wallaby’s while driving into the mine. I love seeing these lil’ guys!

We'll be updating more of John's adventures in crocoite mining. Love what you read? Join us later this summer for the Dallas Mineral Collecting Symposium to hear John tell his stories in person, or start reading from Part 1 of his e-mail records!