The Adelaide Emails, John Cornish in Australia - 3 of 5

If you missed the first few e-mails in the series, start from the beginning at Part 1.

Good Morning, well, it’s morning here in Zeehan, Tasmania as I write, Tuesday, May 6th to be exact, 8:10 am. Outside it’s pouring, sheet after drenching sheet, wave after wind-blown wave of rain; the house rattles and groans as the wind assaults it while the rain pounds with a million hammer-like blows echoing into the room here where I write. Beside me, the two portable, base-heaters are running at full capacity, doing their best to keep the place habitably warm. Hot water in my mug warms my guts and gives me strength…

Yesterday was a great day at the mine, a day with many triumphs. It started well when a large Tasmanian Kangaroo bounced its way across the Dundas track as I was heading to the mine. These seem to be rarer than the more commonly seen, and smaller, Wallabys. Neat, and then better, later in the day as we were getting wood, Bruce pointed out some Devil scat, right beside our little shed. How cool was that, I’d have loved to have seen an actual wild Tasmanian Devil!

And right next to the building, what a mine photo that would have been!

Once at the mine, after having unlocked and opened the gates coming in, I got the old stove going, a fire quickly helping to cut the early morning chill. Next, a pot of water boiling for some tea would do nicely. By the time Bruc

e arrived, I had things handled and was ready for our newest adventures. 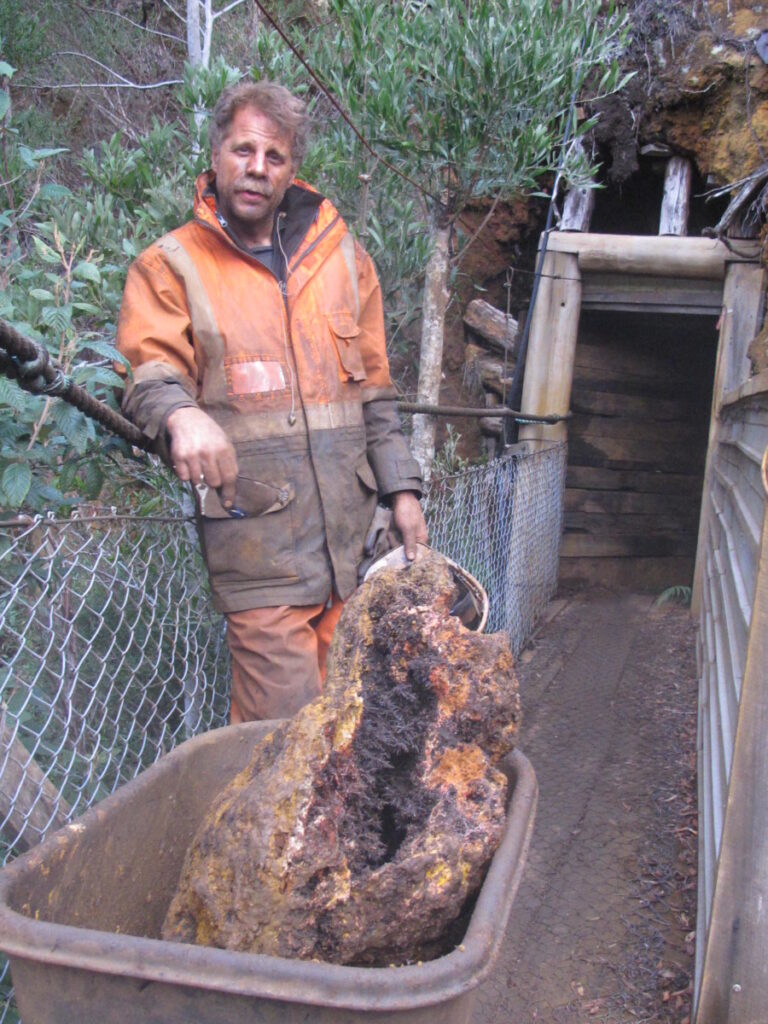 John Cornish, speaker at the Dallas Mineral Collecting Symposium, next to the mine entrance to the Adelaide in Tasmania, Australia. Photo courtesy of J. Cornish.

We started by loading the big pocket (of which I’d written the other day) from the wheelbarrow into the back of the Subaru. To accomplish this with less effort, I scaled a bit of excess rock from the big pocket, relieving it of some of its unnecessary bulk and weight. When done, we lifted and transferred the pocket to a large plastic rack whose handles would allow us solid purchase as we next lifted again and carried the pocket down the stairs and into the back of the vehicle.

Having it loaded, this was a satisfying accomplishment!

From here, it was back underground.

Several days ago, I’d started working another ceiling pocket. Things were going well and I had about two-thirds of the pocket relieved when things got brutally hard, the rock turning ugly-solid. When the rock changed its character so dramatically, I was forced to abandon my work (for the time being) as the pocket was in a difficult place where the amount of work needed to liberate it was out of sequence timing-wise in the overall “big picture”.

So with no other recourse, wait it did and the days went by… 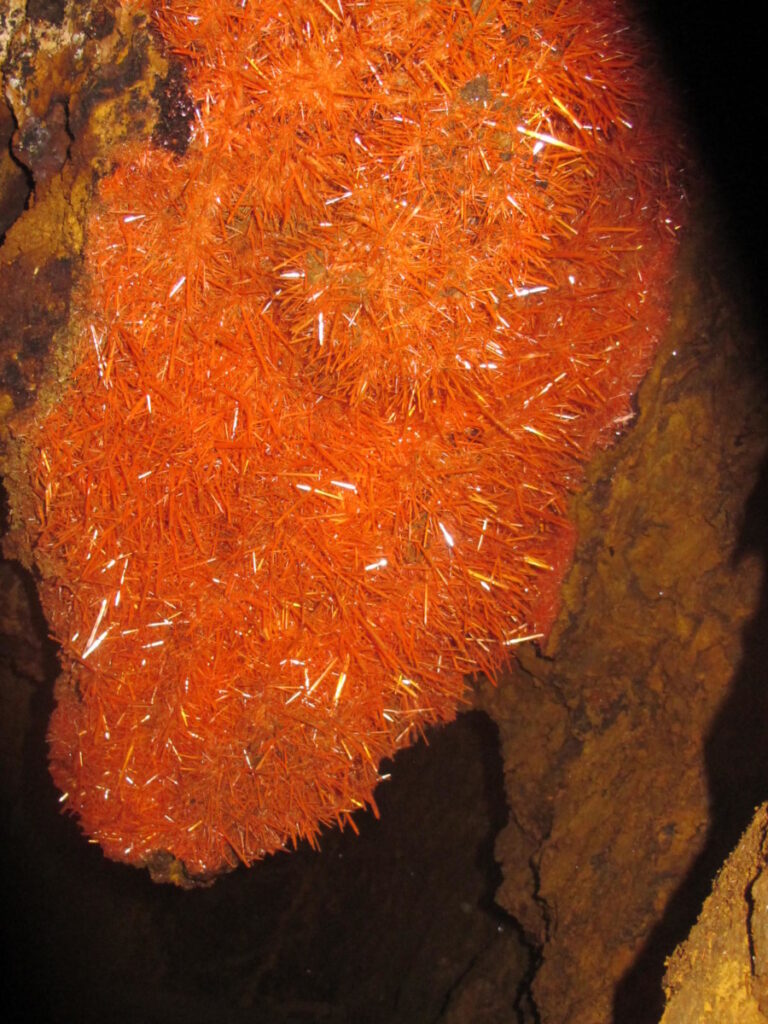 A shocking cluster of orange crocoite crystals in the Adelaide mine, Tasmania, Australia. Photo courtesy of J. Cornish

Now back at it, it was time to remove the rock that supported the pocket. Yesterday I’d begun this task and truth, it took quite a while to get everything where I wanted, but I did and today, I’ll use a bar to crack the pocket free and with a bit of luck and grace, will drop it safely into Bruce’s waiting hands.

Long story short, we did our job perfectly, concisely, exhilaratingly well and it wasn’t that long after that we were both smiling and posing for pictures with the newest insane treasure we’d recovered for Adam and the Adelaide mine owners group.

From there, with this exquisite obstacle removed, we had the opportunity to examine the precariously hanging, overhead “refrigerator” rock we’d identified days before which had forced us to abandon forward development of the drift to instead develop a raise to identify this hazard’s risk potential.

Work in the raise suggested that the rock appeared to be quite solid and firmly emplaced within the pocket/vein and that after intense back-cutting, essentially hollowing the rock out from behind, removing much of its mass, we’d come to a point where we’ve left supporting walls on whose outer surface an exquisite carpet-like covering of perfect brilliant-orange-colored crocoite crystals awaits.

Before beginning the intense process of collection, we opted for a break and lunch. While eating, a large group of noisy, big, black cockatoos descended on the trees hereabout. Two were within 30 feet of the shed and while I was able to make them out quite clearly through the leafy foliage, I didn’t get the chance to photograph them as moments later, they’d taken wing to another nearby tree. Their raucous cries split the quiet for at least half an hour.

Back at it underground, Bruce took the lead. After we’d checked things out, verifying our safety to both of our satisfactions, he set to collecting two large base-plates covered in glowing orange perfection. He did this in a most unique manner, by using a saw! 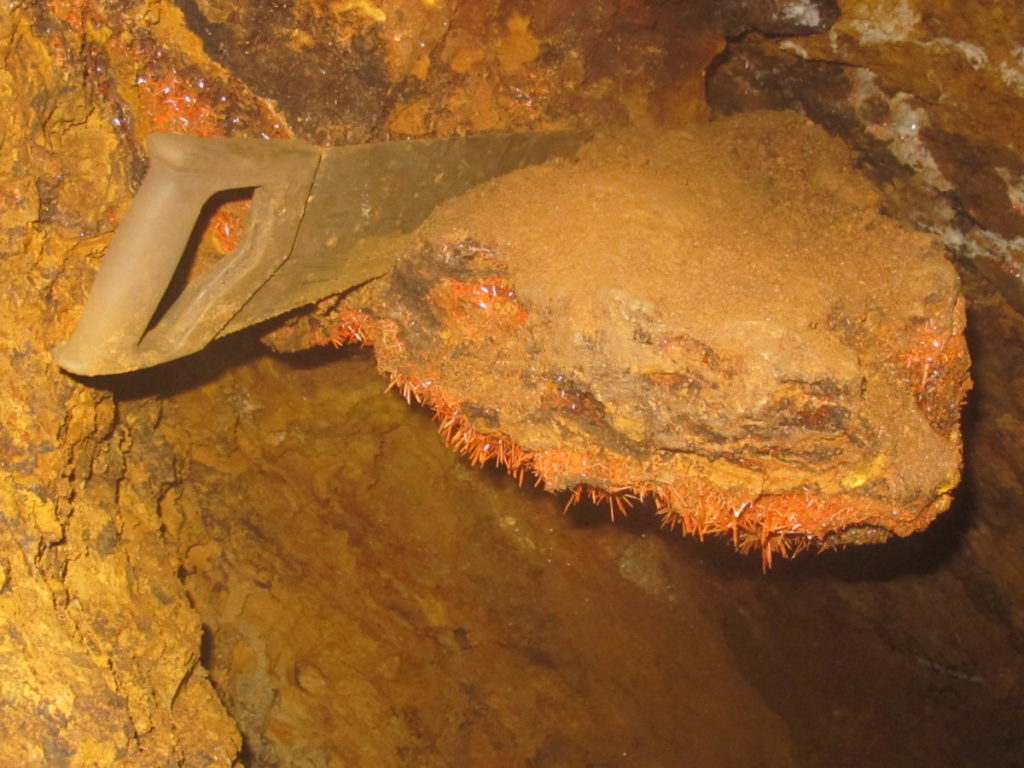 Sawing rock underground in the Adelaide mine to release crystals of orange crocoite.

Bruce had noted that in some instances, the matrix rather than being pounded or pried, could instead be cut-away using an aggressive and stout, hand-held saw. With this tool in hand, Bruce, like a Master, like the incredibly accomplished collector that he is, cut himself some treasure!

He did this from three different directions, sawing through the rocky/clayey matrix. When these cuts were completed to his satisfaction, he called me in and using a bar, I exploited an opening he’d made to wedge the bar into and then gently, with Bruce below catching, levered the rock down and into his waiting hands.

Together we did this, and with his awesome technique and set-up, the first of two, large, incredible, nearly foot-across crocoite crystal plates were recovered flawlessly.

Smiling until our faces hurt, we hauled our new won treasures out from the pocket-zone and down the drift and into the daylight for the first time. In that half-light of the failing day, the crystals seemed to glow as if on fire.

These are magic days and times…

All told by days end, we hauled out the big pocket and three flats filled to bursting with top-notch, world-class specimens. Unloaded later in Zeehan, it’s safe to say that it’s been a good run getting to this point and still, there are incredible days yet to come!

We'll be updating more of John's adventures in crocoite mining. Love what you read? Join us later this summer for the Dallas Mineral Collecting Symposium to hear John tell his stories in person, or start reading from Part 1 of his e-mail records!