Putting Fine Minerals on the Map - The Perot Museum 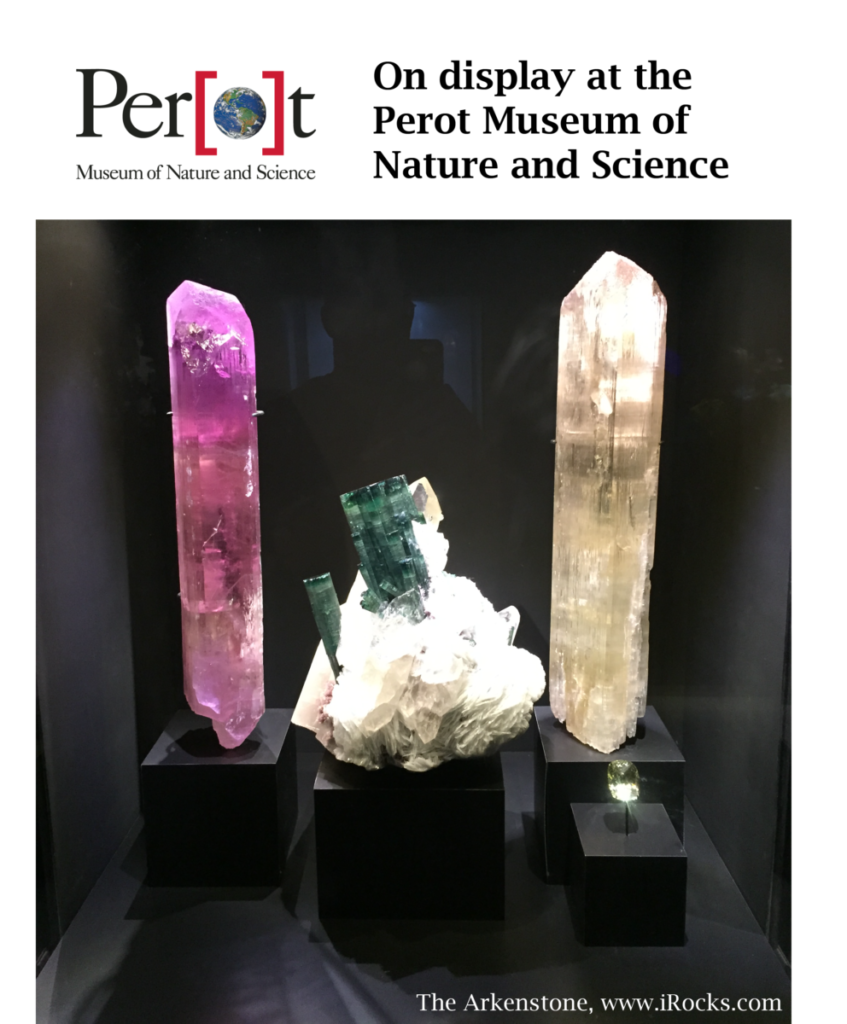 Fine minerals and gems have long been appreciated in museums across the US. Generations have marveled at the Hope Diamond in the Smithsonian, but now the Perot Museum in Dallas is the USA's newest museum of Natural History, where minerals and crystals of the highest caliber are presented as both science and art at the same time. The stunning new display hall is modeled more after an art gallery than a typical science museum, and it is changing the way the world views these remarkable pieces of natural art.

Dallas is the largest metroplex in central Texas, with an urban population of approximately 6 million people within a 2-hour radius, and it is blessed with absolutely nothing mineralogical in the ground except gas and oil! But now, the Perot Museum of Nature and Science in Dallas has opened its doors in the downtown business area and the Dallas Arts District,. It is named after computer-industry businessman Ross Perot and his wife, Margot, in recognition of their children’s contributions to fund the building, and of Perot’s contribution to computer technology and use as an industry in Texas. The museum's goal is all about inspiring curiosity in the next generation.

The Perot Museum represents a new experiment in museum building in several ways, quite unlike the other major metropolitan museums of the United States and Europe that are supported with public funds (and debt). Firstly, it was built only with private money after numerous fundraising events and campaigns, with no public money or any kind of debt. Newly opened on December 1, 2012, the Perot Museum is 180,000 square feet. It is a remarkable building that integrates sustainability, technology and nature in its design (designed by Pritzker Prize Laureate Thom Mayne). Numerous exhibits in all fields grace the museum, with 11 permanent exhibit halls, including many engaging and interactive features such as “Shale Voyager,” in which riders take a simulated journey down a mile-long borehole in search of oil and gas. 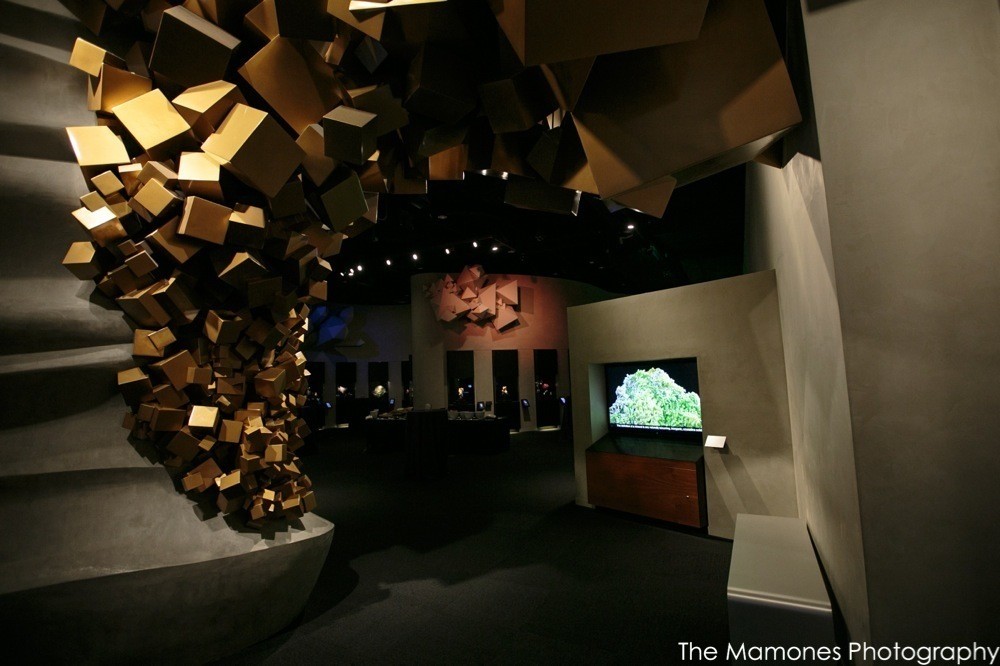 Entry to the Lyda Hill Gems and Minerals Hall, showing a large crowd on one of the donor preview nights, as people saw beautiful minerals on display. Oversized models of crystal structures hang from the ceiling to convey the symmetry of nature as seen in minerals.

Another innovation at the Perot, and perhaps one of their more novel realizations, is the understanding that the new museum could not compete with existing museums or the private collecting community to buy the kind of inspiring, world-class pieces they wanted to show to the public and bring world class attention. Instead, largely with a push from me in the formation stages, the museum developed a unique model: it called on the large Dallas private collecting community to participate in loans of extraordinary specimens for a public display. This allowed the museum to present a world-class collection from opening day. The minerals are rotated periodically, keeping the displays dynamic and exciting while providing the public with access to some of the best specimens from the local collector group that might never be seen otherwise. It is hoped that, over the long years to come, some of those specimens and collections might be donated and given a permanent home there as well. The museum displays these mineral specimens in gallery cases suitable for the finest art, in a darkened hall that more resembles an art gallery than a traditional, stolid, perhaps boring old museum. The effect is to see these specimens we love as true treasures, displayed and presented as if they were valuable works of sculpture instead of as mere “rocks on a shelf.” In the mineral hall are numerous engaging activities using computer simulations and videos to learn about what makes a mineral, how crystals grow, and what causes color and form in minerals. With this unique model of community contribution to the common goal to inspire and educate, we have created a crystal and gem hall in Dallas to rival those of the other great USA museums of science; Smithsonian, American Museum, and Houston Museum.

The mineral hall itself is so lavishly built due to a generous $15 million donation from mineral collector Lyda Hill of Dallas, and named after her. Another 20 collectors contributed specimens to the hall for display. Highlights of the 2,700-square- foot hall include dozens of display cases of fine minerals, a recreated pocket approximately 5 feet tall of gem tourmaline and quartz crystals from Brazil. The museum also displays the largest crystallized gold specimen ever found in North America, from the 16-to-1 Mine in the Northern California gold district. 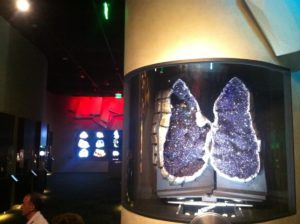 Near the entrance is an imposing sight even for jaded collectors: a large, rich purple amethyst geode from Uruguay measuring nearly 6 feet tall and massing thousands of kilos. It is attached to a series of hydraulic wheels and levered so perfectly on them that even at 2 years old, my son could turn the wheel in front and watch these giant geode halves open and close. This open-and-closing geode is nicknamed “Grape Jelly” and is said to be one of the ten must-see items in the museum - for children and adults alike.

Each Mineral case has a high-tech touch-display tablet next to it, which shows photos and information for each specimen and can be customized and changed easily as the specimens are rotated.

With our flagship new Perot Museum, crystals in Dallas are getting long-overdue recognition, and with their innovative and artistic displays, the museum is putting minerals on the map in a way that has never been accomplished before. 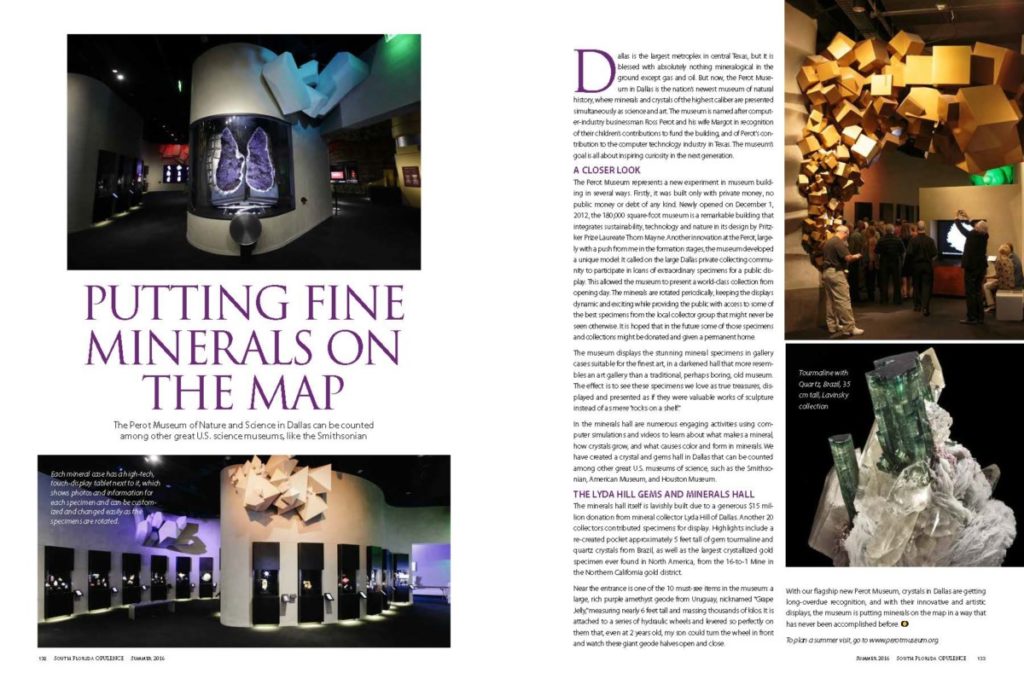