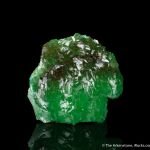 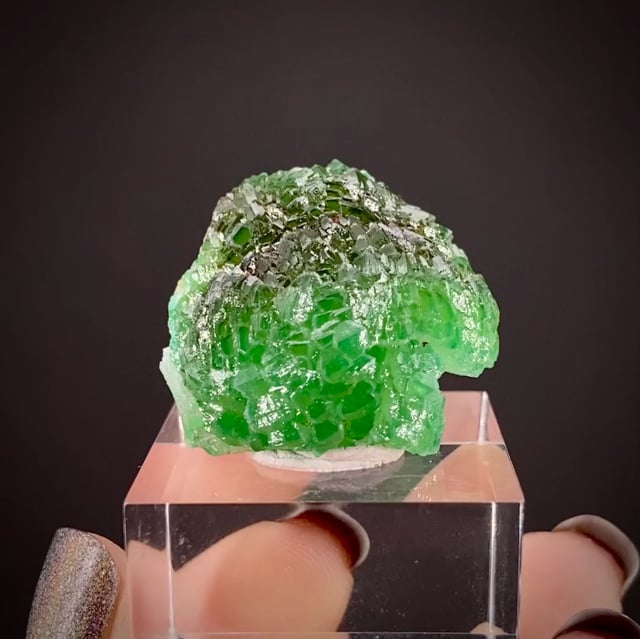 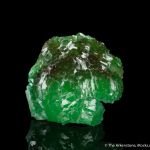 An incredibly lustrous and translucent, lime-green, curved crystal fan of Cuprian Adamite that measures 3.1cm across. This pinwheel-like toenail (small miniature) specimen is nearly circular in shape and the radial prismatic habit of the Cuprian Adamite is revealed along the edges. It's interesting to note that viewing the bottom side reveals that much of the piece grew initially as Adamite and then distinctly changed chemistry at the terminations to form a thin layer of Cuprian Adamite! Remarkably beautiful and intriguing and it simply sparkles in every direction! What a choice toenail! Carl Acosta collection with label. This is the BEST and most intense green color known to have ever come from the mine, and also among the best color in the world for species. It has a neon-saturated tone to it, like apple-green sugar water on a snow cone, that is quite different from adamite from Tsumeb or from other finds here. Probably from the 1960s-1970s. Honestly, even in person it looks a little faked - as if food coloring or dye was infused into the crystals. Lastly, the crystal definition here is more apparent in person and again, unusual even for this productive mine. This is a 1 in 10,000 specimen of adamite from Ojuela.