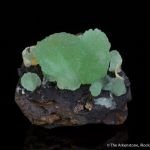 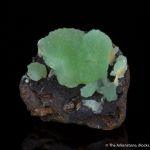 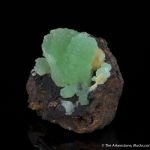 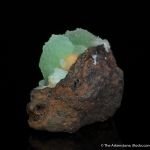 An important example of this rare phosphate species, found at its best in the world only inside fossil cavities in the strange geology of this large commercial phosphate deposit. From no other world phosphate locality, do these form in such large size - and this specimen has among the largest single clusters of the species I have seen, ever. Perched aesthetically on ironstone are two beautifully intergrown crystal clusters of lustrous and translucent, apple green anapaite. An exceptionally rich and aesthetic small miniature, of this very rare phosphate, it is one of the few I have seen of competitive quality. A small yellow barite ball hides underneath, as a bonus. It is found, was found rather, in the phosphate pods at this Crimean Peninsular locality, along with vivianite in fossil clam shells. However, they were always rare and most anapaite crystallized here only as thin, sparse coverages. This robust, deeply-colored crystallization is very rare and was never common even in the late 1900s heyday for the locality. It is now mined out. I first handled this specimen in 2012 and had the chance to get it back recently. It remains important.