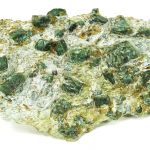 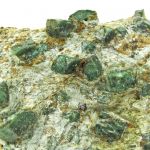 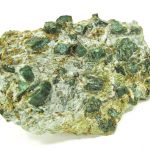 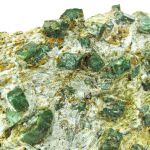 Crystals of lustrous, dark green chromium rich lawsonite, to 1.7 cm across, are festooned on both sides of the host matrix. Several crystals appear to be doubly terminated. A remarkable new find from the Tucson 2012 show, of green lawsonite crystals (the color induced by chromium), in contrasting matrix with thin veins of purple actinolite and white muscovite.These are lustrous, deep green crystals of chromium-rich lawsonite, which is a very uncommon silicate found in good crystals at only a few locales wordlwide. And, never have we seen them with such color! This is from a small find, but it is unclear exactly when it was found and leaked out to the market. CORRECTION NOTED WITH THANKS TO DR. Maarten Broekmans: The “ purple actinolite” you mention in the descriptions, however, is glaukofane or crossite, a sodic amphibole characteristic of high-pressure terranes. This complies with lawsonite being a sodic HP mineral itself, far better than an actinolite would, a calcic (Fe, Mg) amphibole. the silvery white mica is rather paragonite, the Na equivalent of K-muscovite. Also typical for HP settings. Besides that, Cr would color an actinolite stark green too, not purple. In fact, whole (scarcely vegetated) valleys on the island have this bluish-purplish tone over them, an amazing view 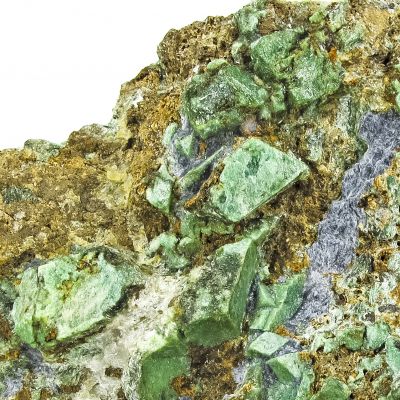