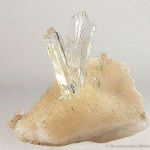 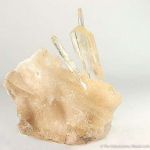 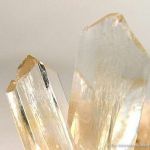 Perched on a bed of tiny gypsum crystals, which in turn is on a matrix of massive gypsum, are three transparent spears of Selenite to almost 4 cm. This cluster is extremely aesthetic. These were once available in the early 90s in some quantity but I have seen few in recent years and am told that the quarry has not produced them in almost a decade. OK, so it is "only selenite" to some folks but, species interest level aside, its just aesthetic as all get out and some of the prettiest, sparkliest mineral specimens on the planet