Kay Robertson: A Treasure in the Mineral Collecting

Friends, we are sorry to inform you that Kay passed away in early 2020, just shy of her 100th birthday, having collected minerals for longer than any other collector we are aware of.  Her mineral-related obituary appeared in the Rocks & Minerals May/June 2020 issue. 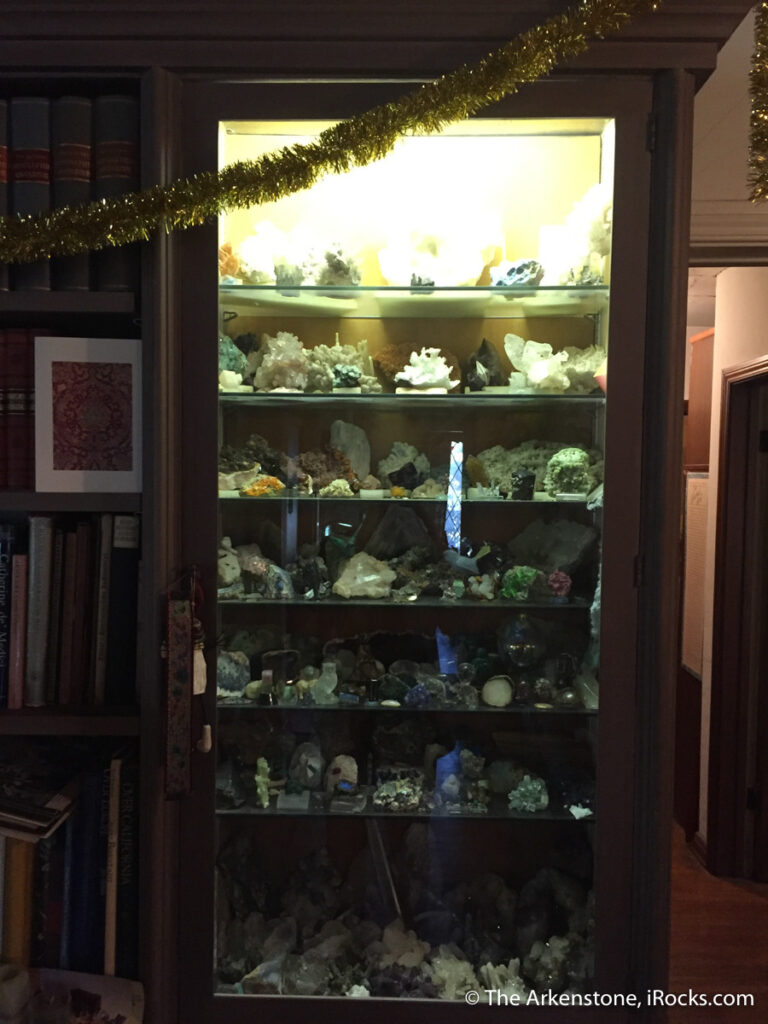 I will say that, in a world full of characters and crazy collectors, Kay stands out as one of the most passionate collectors I have had the privilege to know - to this day, at 97, she is as passionate about minerals and the glory of knowledge that comes from them, as she must have been 90 years ago when she started.

Kay is a collector from another era of mineral collecting, when thousands and thousands of old classics were recycling from old collections in Europe, and the mineral collecting market (and prices) was in its infancy. Many mineral collectors were academics, or affiliated with museums, and most collectors pursued minerals of their local area. She was hooked in 1928 at the age of 8 and collected for over 80 years - always a purist, collecting for the enjoyment and intellectual sport of it, with no regard to minerals as a longterm investment (though they came to be, anyways!). She pursued mineral collecting as a stress release from her world of high end art dealing in Europe and the USA, never spending the money on minerals that she spent on old tapestries and textiles, but perhaps spending more time. Her collection eventually ballooned to 13000 specimens at the time I bought it (she is 97 now). Until the 1990s, she forced herself to keep to collecting as a fun hobby, not an investment, by setting a price limit to what she would spend ($35 per piece went far in 1950; not so far by 1990). Despite her discipline, friends sometimes found ways to evade her price radar by giving her suspiciously good deals or trading to her benefit. I see many specimens from Scott Williams and Walt Lidstrom in her collection that really should have been priced more than she paid. Peter Embrey of the British Museum seems to have gone out of his way to give her oddly generous "house gifts" or trades of $5000-plus specimens on his visits to her home in Los Angeles over the years (including a number of old classics like German Mimetites and a Kongsberg silver). She once so desired a specimen of samsonite, lacking a good one in her otherwise comprehensive German suite, that Embrey trimmed off a 1 cm crystallized piece from the holotype specimen in the BMNH, and gave it to her as a gift (I have now repatriated this piece back to a friend in Germany where it belongs, she was happy to hear). 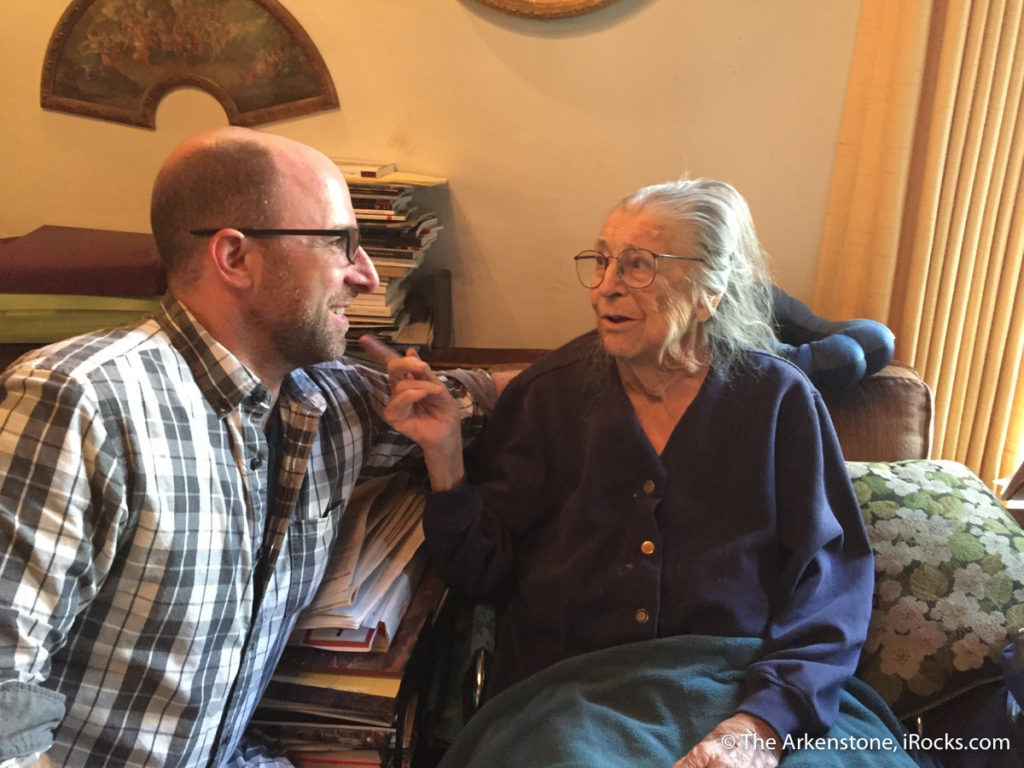 Kay Robertson made sure Dr. Rob Lavinsky was given a stern warning to take care of her precious minerals and the historic labels that accompany them.

She still has, to this day, the first major specimen of her collection, a remarkable German Sylvite specimen given to her by a Prince of some kind, when she was 8 years old and living in a grand old mansion while her father was the German diplomat to Venice. It sits in her living room where she sees it every day. It started a love of German and European classics that lasted her whole career, and she has built a trove of the kinds of rare old locality pieces available in the 1950s-70s and completely unseen for sale today. She used the collection as a study collection, and invited select collectors and academics to do so as well, eagerly participating in the discovery of new species and the identification of German classics from others' collections. She is probably the single most knowledgeable person today on the German classics, I would guess (she even got the best of Mark Feinglos in a trade once, on a rare German copper - and he definitely knows his stuff!). She speaks romantically of all the decades of travel to Europe, where she visited the museums, the collectors, and many of the mines before they were lost to history. She had a particular love of Hagendorf, and the new mineral Kayrobertsonite was recently named in her honor for amateur contributions to systematic mineralogy by Tony Kampf, and comes from Hagendorf. 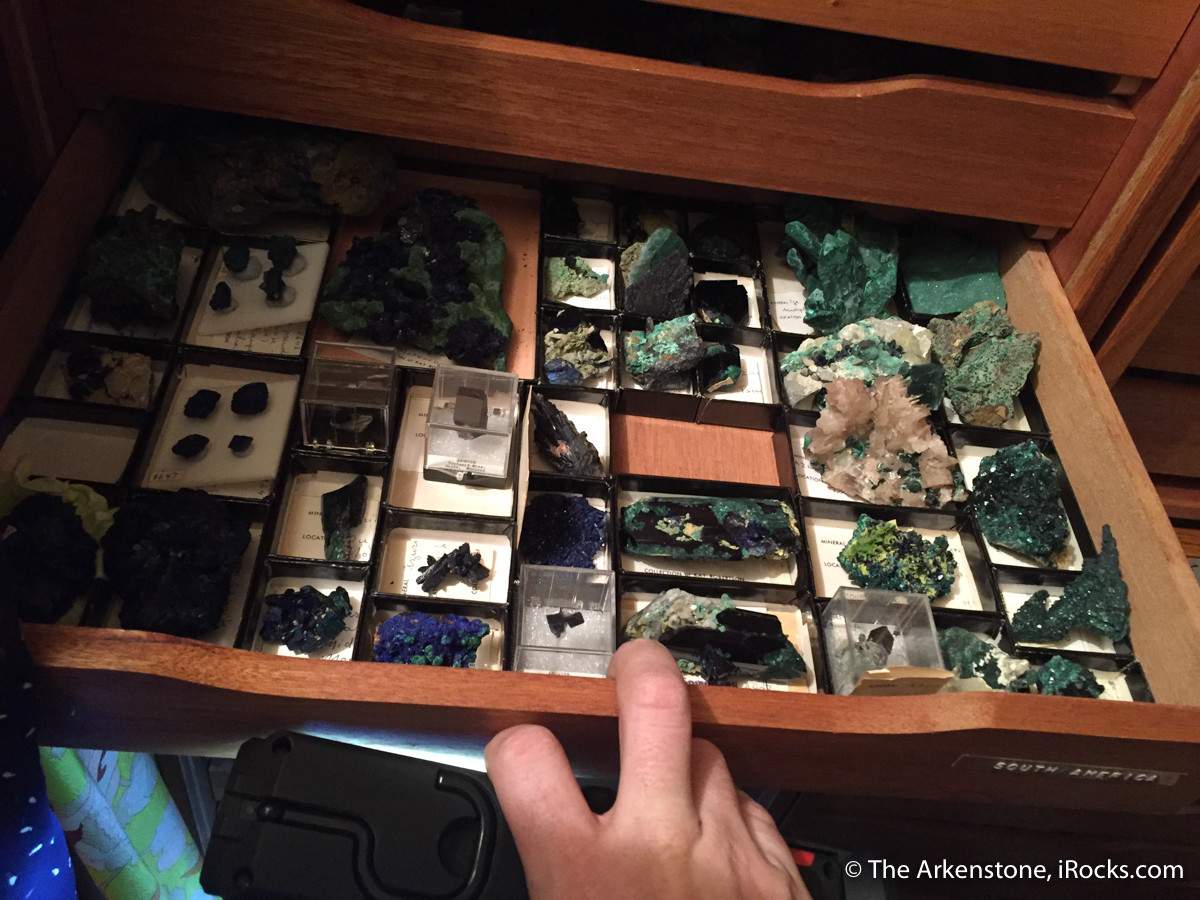 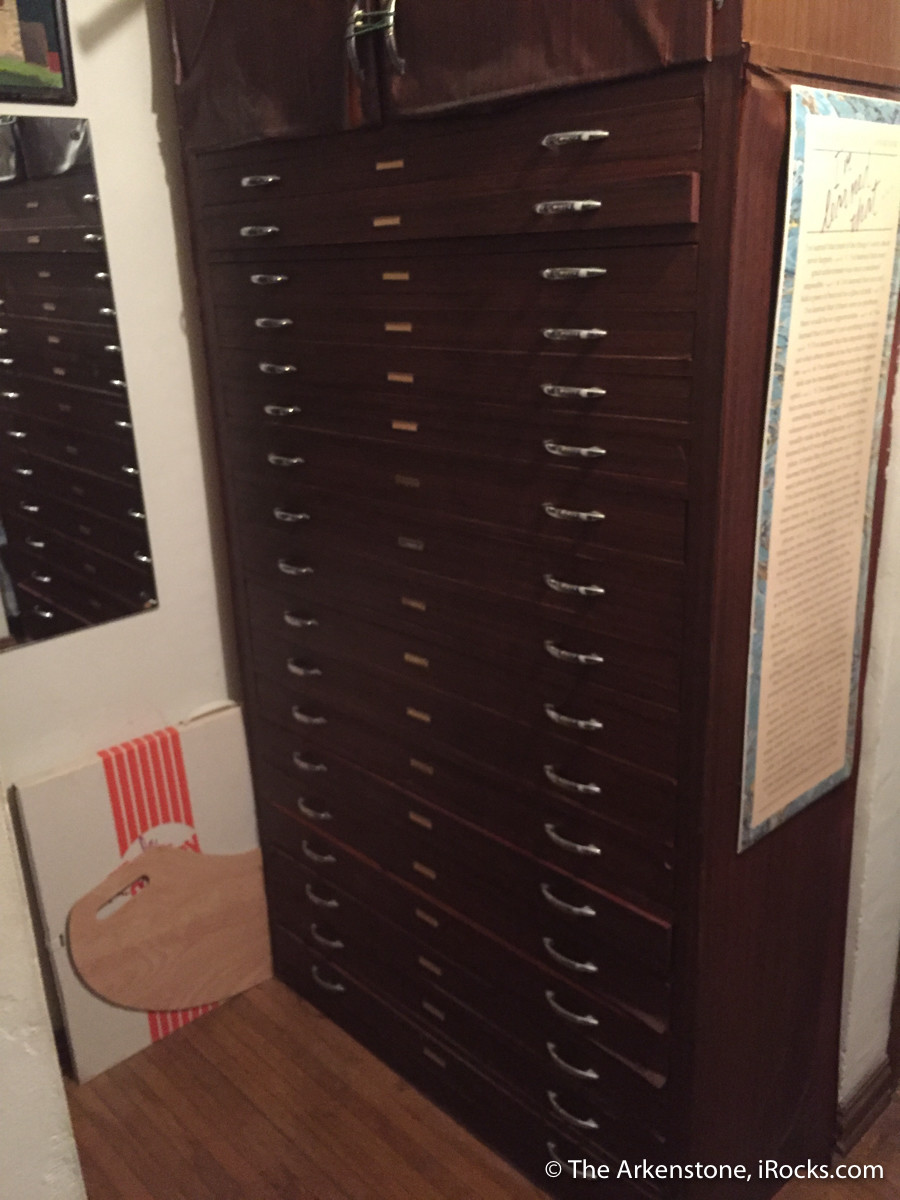 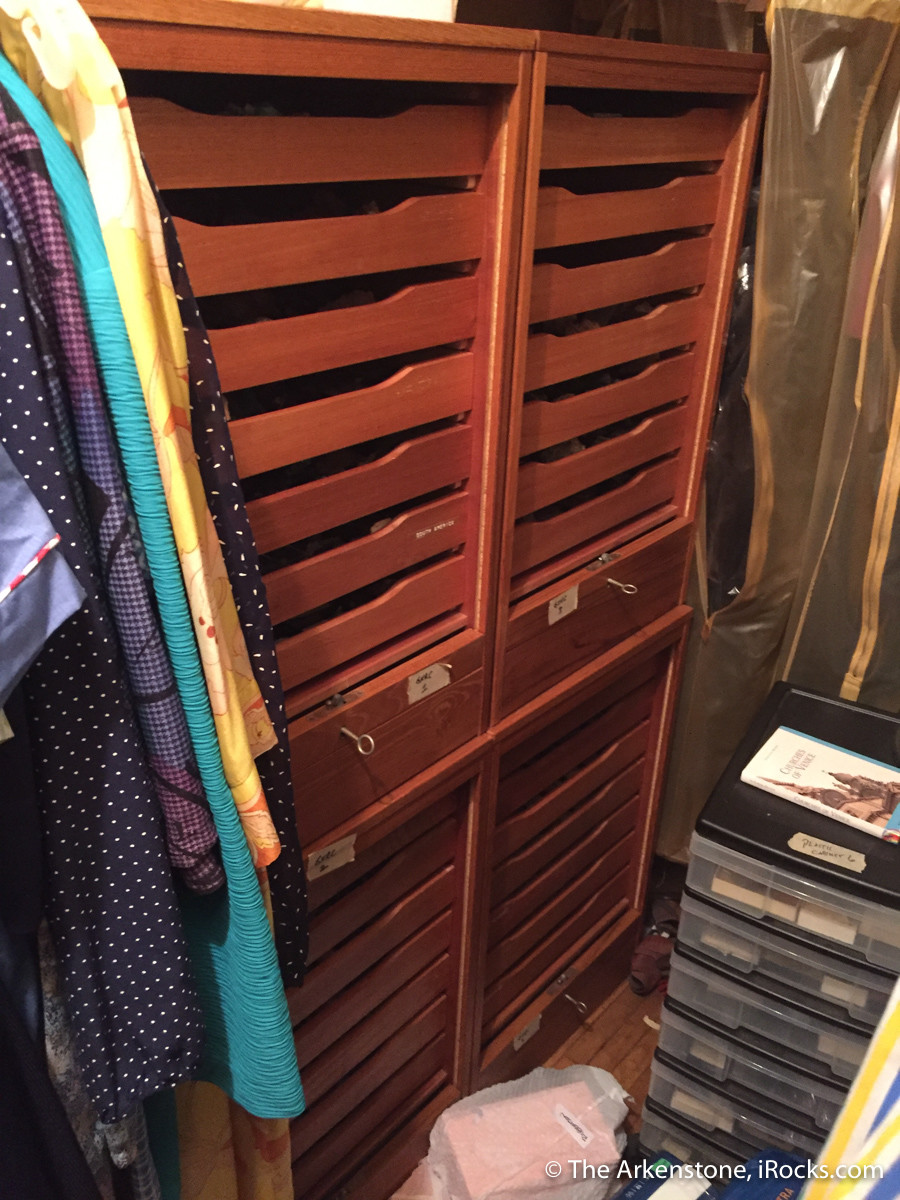 I first met Kay in Tucson in the early 1990s ( I had gone since 1991, but she has gone since the 1960s!). I only knew her then as the "German lady who knew way more than I did" about pretty much all minerals. I was lucky enough to get to know her better after I moved to San Diego for grad school in 1995, and saw her at the local shows 3 or 4 times each year. I must have passed her test because I was invited to see the collection in 1997 for the first time, and I know that few had the privilege. For all her gregariousness at shows, she let few into her home. In those few visits in the 1990s, I learned an enormous amount about the old classics, about silver species, German rarities, and the thrill of collecting intellectual old oddities as opposed to only trophy species. She helped teach me to appreciate the micro as well as the macro, and her stories about the labels and the history of each piece convinced me of the value of provenance to specimens (as you will see in our updates of the collection, we tried to document and pass on all the information she gathered). A collection like this is impactful in sheer massiveness of the accumulated information and importance, and takes time to digest even on a quick skim. (Usually, 2 days at a minimum, and she was happy to talk the whole time about it all. ) While not full of trophy display specimens, every drawer had something that blew me away, especially as I had a lot to learn about the classics at the time. All of her minerals were stored in custom cabinets, with crammed drawers, mostly of wood and lovingly made by her husband for her over 50 years ago. 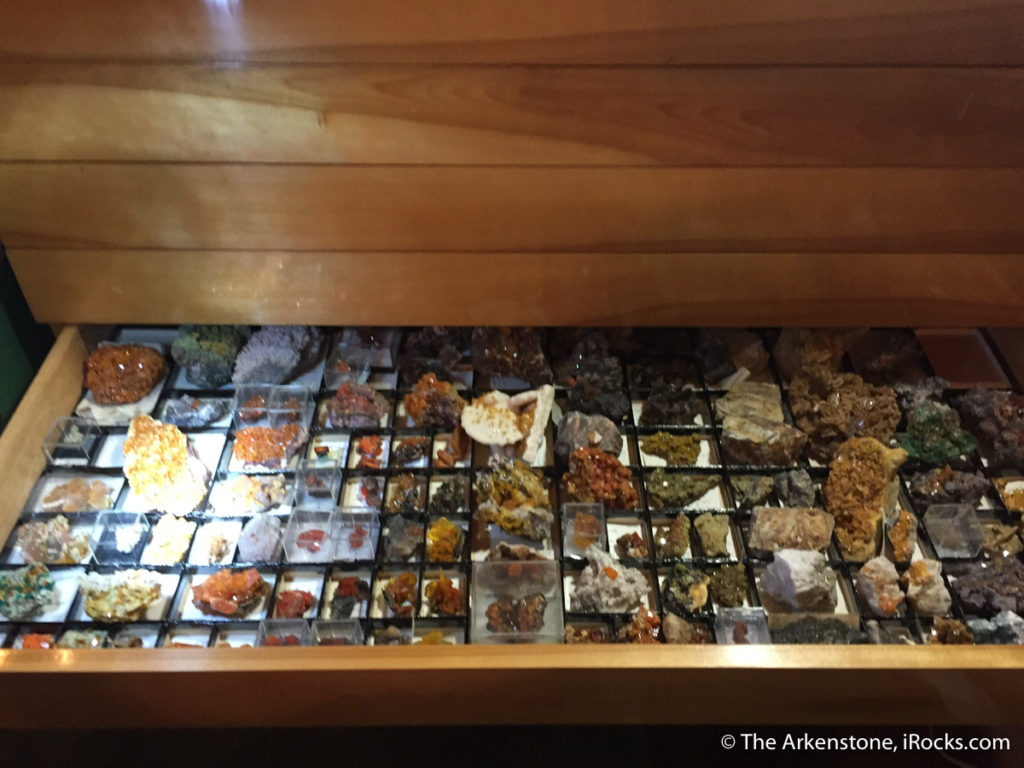 Drawers upon drawers of fine minerals fill Kay Robertson's home, many in drawers and cabinets custom-built by her husband.

Kay's priority for the collection was to make it a reference suite and a teaching collection for those who needed it. She worked on several mineralogy projects, including a study of xanthoconite and the Hagendorf phosphates. Kay intended for the last 40 years of  her life that this collection would be her legacy to mineralogical education and to the museum of Los AngelesCounty, specifically. (Believe it or not, she actually curated their world textiles exhibit back in the late 1940s, before she was known as a collector!). She became lifelong friends with curator Dr. Tony Kampf, and promised them the collection. Much to her surprise, she has outlived her other assets and is in excellent mental health, and remains in her home with healthcare assistance. She recently made the difficult decision to sell the collection instead of donate it, as intended.

Obviously, this was not her initial plan, but she said to pass on that she takes comfort in knowing that her pieces will be shared with other passionate collectors around the world - the next best thing to going into a museum study room, in her mind. I knew that she felt conflicted about this, and so Tony Kampf and I met at her home one day in December of 2016 to present a proposal to her: I would buy the collection with the express intent of then donating a section of the value to the LA County Museum myself: the important Hagendorf reference suite; the micromounts; the major California pieces (save only one stibnite); and most of her more modern acquisitions of common species that they could have a use for in exhibits or outreach programs. Tony (now curator emeritus) and his colleague Alyssa Morgan, current collections manager, came and helped us pack at Kay's home. They returned to the museum with a moderate sized SUV vehicle, stuffed to the gills with mineral flats. So, in the end, a part of the collection is in museum now as we speak.  (see photo of smiling curators doing the hard and glamorous work of packing thousands of specimens, the bane of the the modern "international mineral dealer," in the LA heat).

Tony Kampf and Alyssa Morgan assisted with packing up a large portion of Kay Robertson's collection to add to the LA County Museum's collection. 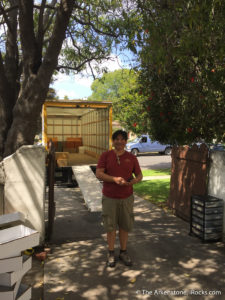 Our good friend, LA-area collector Carl Acosta joined us for the packing, and to make deli runs for Reuben sandwiches to Famous Deli on Pico, nearby (he is really good at making food runs!). I'll admit here, that he took an awfully long time to pack the garnet drawer and probably would have been more efficient if I had not told him he could buy a few...

Kay's own life story can be found in wonderful prose, here, written up by the Mineralogical Record far better than I could do it justice now in a piece featuring her collecting history. Additionally, her granddaughter has launched a Facebook page to share details and stories regarding special pieces.

I am honored to announce that we have agreed with her family and Rainer Bode, editor of MINERALIEN WELT in Germany, to publish an extended issue (with dozens of pages dedicated to the Robertson collection) of the magazine in German, her native tongue, on her collection and her life. Although many Americans and curators know her collection, few Europeans have seen the specimens and visited her home, and she wants to share it with the larger world of collecting. Look for this extended edition to come out at the Munich show or soon after, of 2017. It is a small and long-deserved tribute to a passionate collector and her legacy, and deserves to be shared.